With progress comes homelessness to the big city

The stench in the disused railway wagon is almost overwhelming, with human excrement smeared on the floors, thin, damp mattresses slung in the corner and debris scattered around. This is home to one of Bratislava's swelling groups of homeless people. Others live in disused outhouses, sewers, basements and abandoned houses.
Miloslav Sirný, chairman of the Association for Assistance to the Homeless - the only NGO dealing exclusively with the problem of homeless people in Bratislava - knows all the hideouts, having been a homeless person himself. "The situation is very serious," he said. His figures show that Bratislava has around 3,000 homeless people - a tenth of the country's total - of which between 150 and 200 sleep rough. 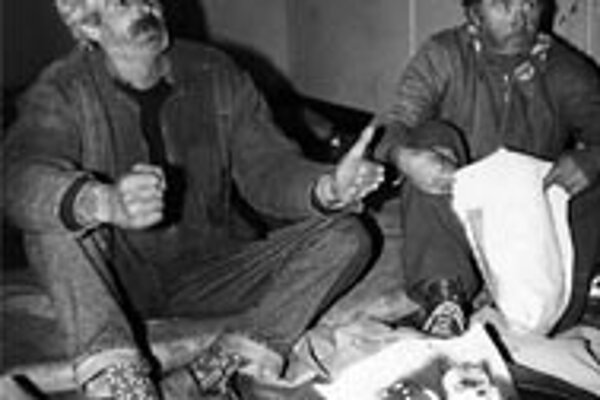 Font size:A-|A+0
The stench in the disused railway wagon is almost overwhelming, with human excrement smeared on the floors, thin, damp mattresses slung in the corner and debris scattered around. This is home to one of Bratislava's swelling groups of homeless people. Others live in disused outhouses, sewers, basements and abandoned houses.

Miloslav Sirný, chairman of the Association for Assistance to the Homeless - the only NGO dealing exclusively with the problem of homeless people in Bratislava - knows all the hideouts, having been a homeless person himself. "The situation is very serious," he said. His figures show that Bratislava has around 3,000 homeless people - a tenth of the country's total - of which between 150 and 200 sleep rough. Poverty is the main reason why people lose the roof over their heads, according to Sirný, with housing associations and private owners using "all kinds of tactics" to evict tenants who can't keep up the rent. "All the various hostels run by the state or by charities are full up," said Sirný, "so there's nowhere else for homeless people to go but the streets."

As the city acquires other features typical of a Western city, such as shopping arcades and new buildings, so the previously unknown phenomenon of homelessness comes inexorably in their wake. "Every successful city attracts the homeless," said Milan Vajda, spokesman for Mayor Peter Kresánek. "Being a homeless person is a different kind of lifestyle, and some of the homeless are quite proud of it. But I'm sure there are enough spaces at the various hostels if they need help."

The view that homeless people are sleeping rough because they want to runs deep among Slovaks, and their plight elicits little sympathy. "People think that the homeless are all criminals and drunks. But that's not true," said Sirný. "Some of them are, of course, but most of them are just people who are down on their luck."

As the problem gets worse, the country is at a loss as to how to deal with it. "It's a hot potato," says Vajda, "and is exacerbated by the severe lack of housing in Slovakia." He says that homelessness is an issue that should be solved by both local and national authorities. "It's also been used as a political tool," he continues. "When a group of homeless people went to Tomášikova street [where the headquarters of the HZDS is based] last year to bring attention to their situation, they were told to go and visit the mayor's house on Christmas Eve." Early last year, Kresánek found Sirný's association a building on the edge of town, and provided some furnishings. It now serves as a "Station of Hope," where the homeless can find food, shelter, clothes and help for addictions. Its staff also finds them work, permanent housing and arranges identity cards. "We want to differentiate between the deserving and those who aren't interested in a normal life," said Sirný. "We want to help those who want to get back on their feet again to find work and accommodation. There's always something if the person really wants to work. Those who don't want help are asked to leave."

The stories related by Jaro and Jano - homeless cousins living with two other people in a World War II bunker in the city's outlying hills - are typical. Their last proper meal was at a soup kitchen provided by the Sisters of Mother Theresa in Krasňany, and they hadn't washed in two weeks. They eke out a living by collecting waste cardboard, paper and bottles for recycling and by repairing cars for stranded motorists.

Jano worked in the police before the revolution, but was persecuted after refusing to join the Communist Party and marrying his wife in a church ceremony. He was assigned the most menial tasks and soon left the force. His father committed suicide in 1977 and in 1980 his wife divorced him and his mother remarried. Two years later he was disinherited and the family moved away. He moved from friend to friend, relative to relative, until five years ago he had no other option but to sleep rough. "My family doesn't want to know me now, and I'd rather live as I do than go back to my native village, where they turn their noses up at me," he says. "If my father hadn't killed himself, I wouldn't have ended up like this."

Cousin Jaro has been with him for three years. His mother worked in a hospital, and they lived together in a house connected to it. When she died in 1993, the hospital needed the building (although it later burned down), and since Jaro wasn't an employee, there was no obligation to find him accommodation. He is bitter that the local authority couldn't find him an old house to live in. "I'm a qualified plasterer," he said. "I told them I could repair an old shack or something. They told me there wasn't anything available. But when someone with some money comes along from Bratislava and wants to buy an old building, they're suddenly easier to find." One of Jaro's two sisters, who were also turned out, lost some toes to the frost when sleeping rough in Bratislava last winter.

Given their circumstances, Jaro and Jano remain remarkably sanguine. "When I get a job, maybe we'll find a flat," says Jano. "Just a single room would be enough." Jaro is the only one of the pair with an identity card, and thus receiving state benefits. "I get 1,800 crowns every month. Flats in Bratislava cost seven or eight thousand."

Sirný tells them to come to his Station of Hope the following week, and says he knows people who can employ them. Elderly, simple and publicity-shy, his brow furrows as he listens with genuine sympathy to their tales. Besides the hostel, he is planning various schemes to help the homeless and others in need.

"Mr. Sirný is a unique phenomenon among the homeless," says Vajda. "He has so many ideas." The sticking point, however, is money. Sirný has received funds from PHARE, but desperately needs more to hold events such as the Christmas Eve meal for 300 homeless people that has become a tradition over the last five years. "We create a real family atmosphere for them," said Sirný. "This encourages them to reintegrate into society." In 1995, the cost of the meal was funded by the government. In 1996, however, they were on their own. Sirný sighs. "There's no compassion left in society."