January 24: Karol Plank resigns as chief justice of the Supreme Court, outlasting six ministers of justice and four prosecutor generals during his six years on the court. Milan Karabín, supported by both coalition and opposition deputies, replaces Plank. Upon taking the post, Karabín says one of his aims is to "to ensure that the number of criminal cases will be heard as soon as possible."
February 20: An Austrian district court in Vienna decides that Michal Kováč Jr., (below) son of the Slovak President and wanted for questioning by international police for his possible connection with a fraud case involving the Slovak trade company Technopol, cannot be extradited and thus may return to Slovakia. 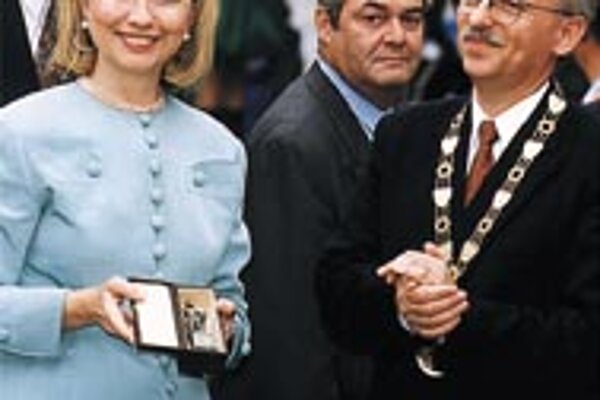 Font size:A-|A+0
January 24: Karol Plank resigns as chief justice of the Supreme Court, outlasting six ministers of justice and four prosecutor generals during his six years on the court. Milan Karabín, supported by both coalition and opposition deputies, replaces Plank. Upon taking the post, Karabín says one of his aims is to "to ensure that the number of criminal cases will be heard as soon as possible."

February 20: An Austrian district court in Vienna decides that Michal Kováč Jr., (below) son of the Slovak President and wanted for questioning by international police for his possible connection with a fraud case involving the Slovak trade company Technopol, cannot be extradited and thus may return to Slovakia. Kováč Jr. was kidnapped on August 31, 1995 and forcibly taken across the border into Austria in a celebrated incident in which opposition politicians and others linked the Slovak Intelligence Service (SIS) to the crime. Friedrich Novotny, the presiding judge, says: "On the whole case one more fact is striking, which is that Kováč Jr. was abducted to the territory of a foreign state by the state organs of his own country." The government has repeatedly denied any involvement in the caper.

March 1: Two of Slovakia's leading political leaders, Ján Čarnogurský of the Christian Democratic Movement (KDH) and Dušan Slobodník of the Movement for a Democratic Slovakia (HZDS) launch the first of a series of live debates called "Spectrum Live," organized by The Slovak Spectator. The two leaders spar over Slovakia's foreign policy in front of a sold-out audience at Bratislava's Divadlo West.

March 26: Almost a year after the accord was signed, Parliament ratifies the country's basic treaty with Hungary. Prime Minister Vladimír Mečiar and his counterpart Gyula Horn sign the treaty to international acclaim on March 19, 1995. While most praise the favorable vote, Hungarian deputies say it contradicts recent laws that they say go against the treaty's spirit.

March 26: Parliament passes a controversial amendment to the Criminal Code, which coalition deputies backing the bill maintain is needed to defend Slovakia from unsubstantiated criticism. The European Union (EU) expresses its concern with the bill, popularly known as the "Protection of the Republic," writing that certain provisions "raise suspicion that they harm freedom of expression and other democratic rights."

April 16: Major Peter Vačok, in charge of the Kováč Jr. abduction case, resigns after two months, saying he is "enraged and disgusted." Vačok, an 18-year veteran in the police corps, was forced out after he raised questions about the involvement of three SIS agents in the abduction.

April 21- May 5: The Slovak hockey team, in the elite Group A for the first time, survives a scare at the World Ice Hockey Championships in Vienna, but wins its final match to stay in the top division.

April 27- April 28: Delegates at the annual congress of the Party of the Democratic Left (SDĽ) surprise political observers by electing Jozef Migaš, then serving as Slovakia's ambassador to the Ukraine. "Joining the ruling coalition is out of consideration," Migaš says. "But we won't join the opposition bloc either."

April 28: Róbert Remiáš, the contact person for self-proclaimed SIS officer Oskar Fegyveres, dies when his car suddenly explodes in Bratislava. "He [Remiáš] died because he knew me," says Fegyveres, who claims he assisted the SIS in Kováč Jr.'s abduction. A spokesman for the Interior Ministry says the explosion was an accident caused by a malfunction in the car's propane system, but several months later police admit that a bomb was present in Remiáš's vehicle.

May 13: Radio Twist broadcasts a recorded phone call allegedly between Interior Minister at the time Ľudovít Hudek and SIS Director Ivan Lexa (left). Both Lexa and Hudek deny the tape's authenticity, which describes how they can obstruct the Kováč Jr. kidnapping investigation.

May 17: Major Jozef Číž, the chief investigator in the Kováč Jr. kidnapping case, announces that he has tabled the case for lack of evidence. After seven months of investigating, Číž says, he could not decide whether Kováč Jr. was kidnapped by unknown culprits or whether he organized it himself.

May 17: Parliament passes a bill governing the registration and activities of foundations in Slovakia that, though modified, still is resisted by the non-profit sector. "I agree that it's democracy in action," says the head of the non-profit sector's steering committee, Pavol Demeš. "but the overall result is that this law is highly restrictive."

May 29: President Kováč files criminal charges against Prime Minister Mečiar, accusing him of slander and "defamation of the country's President." Mečiar's office responds: "The Premier understands the charges as yet another act by the President to discredit [Mečiar's] person."

June 4: In another sign that Slovakia is no longer in the first group of countries for NATO membership, the U.S. House of Representatives introduces a bill authorizing money for Poland, Hungary, the Czech Republic and Slovenia - but not Slovakia. Asked why Slovakia is missing, a House staffer whose boss was one of the drafters of the bill says: "The Slovak government has done things which has led some congressmen to question its commitment to democracy."

June 1: In the first major threat to the three party coalition's hold on power, the Slovak National Party (SNS) announces that it will break with the dominant party, the Movement for a Democratic Slovakia (HZDS), over differences with management changes in the state-owned insurance company Slovenská Poisťovňa (SP). The new management are individuals nominated by the HZDS, while those replaced are allied with the SNS and the third coalition party, the Association of Slovak Workers (ZRS).

June 28: HZDS leader Mečiar announces that the coalition is united again. In an apparent bow to demands by the junior coalition partner SNS, Mečiar says that scheduled changes in SP's management would be delayed, and that the coalition would introduce a new regional division bill and resubmit the "Protection of the Republic" bill to Parliament.

July 6: American First Lady Hillary Clinton (above with Bratislava Mayor Peter Kresánek) and US Ambassador to the United Nations Madeleine Albright pay a brief six-hour visit to Slovakia. While Mrs. Clinton hears from non-profit leaders on the new law on foundations, Albright carries the White House's specific concerns with various laws. "Mr. Mečiar was answering my questions," Albright said after her meeting with the Premier. "I just hope he heard me."

September 5: Reacting to Culture Minister Ivan Hudec's dismissal of Slovak National Theater's (SND) artistic director, Peter Mikulík, SND actors call on Hudec to resign. On October 2, SND actors stage a rally on SNP Square in Bratislava, protesting the firing the day before of SND's director, Dušan Jamrich, and going on strike. The strike, however, is called off two days later after Mikulík is reinstated to his position.

Sept. 26: Coalition parties push through a university law criticized by the country's academic community for giving the Ministry of Education direct power to intervene in internal university affairs such as its election of a dean or its awarding of a doctorate.

October 22: The American ambassador to Slovakia Ralph Johnson and the EU ambassador to Slovakia Georgios Zavvos give speeches that for the first time publicly express their missions concerns with Slovakia's democratic development. "Only through its own efforts in the field of democracy as well as in economy can Slovakia hope to join the EU," Zavvos says. "There is much work to be done, and in this there can be no delay."

Oct. 23: The Slovak tugboat Ďumbier (below) capsizes and sinks in record flooding of the Danube River near Vienna, killing eight Slovak crew members. An official from the Austrian Shipping Authority blames the accident on the boat's captain; officials with the Slovak Shipping Authority, to which the boat is registered, vehemently deny it.

Oct. 27 - 30: European Parliament representatives in the joint European-Slovak Parliamentary Committee leave Bratislava less than satisfied that the government is meeting EU entrance criteria. "If the situation here doesn't change, I'm afraid Slovakia will not be allowed into the first group of new EU member countries," said Doehe Eisma, a European Parliamentarian from the Netherlands.

December 4: František Gaulieder, a deputy in the Movement for a Democratic Slovakia (HZDS) who left the party in November, is stripped of his seat when coalition deputies vote him out. Justifying Gaulieder's ouster, coalition members, including Speaker of Parliament Ivan Gašparovič, say that the ex-HZDS member wrote a letter saying he would voluntarily give it up. Appearing before the Mandate and Immunity Committee, though, Gaulieder denies having written the letter and states he wants to keep his seat. The incident prompts a swift, angry response from the European Parliament and results in an appeal to the Constitutional Court.

Dec. 6: Embattled ex-HZDS deputy František Gaulieder endures a bomb explosion at his house in the southern Slovak town of Galanta which he links to his recent fight to keep his seat in Parliament.

Dec. 17: Claiming this newest version of the "Protection of the Republic" bill is in line with the country's Constitution and with EU norms, coalition deputies pass the measure. "The law applies not to enemies of the government, but to enemies of the state," argues Jozef Prokeš from the SNS, the party which most vigorously supports the legislation. President Kováč vetoes the bill after he returns to office in January.