January 3: Volkswagen signs an agreement to open a new factory in Nitra with an investment of "tens of millions" of German DM. The 1,200 employees will build electrical systems for VWs.
Jan. 13: The Slovak National Bank (NBS) drops its discount rate from 9.75 to 8.8 percent, reflecting the fall of year-to-year inflation since March, 1995 from 12 to 3.5 percent.
Jan. 25: Premier Vladimír Mečiar announces that privatization of the four largest Slovak financial institutions (Slovenská Sporitelňa, Investičná a Rozvojová Banka - IRB, Všeobecná Úverová Banka - VÚB and the insurance company Slovenská Poisťovňa) will be completed by the end of February. Almost a year later, they are still not privatized. 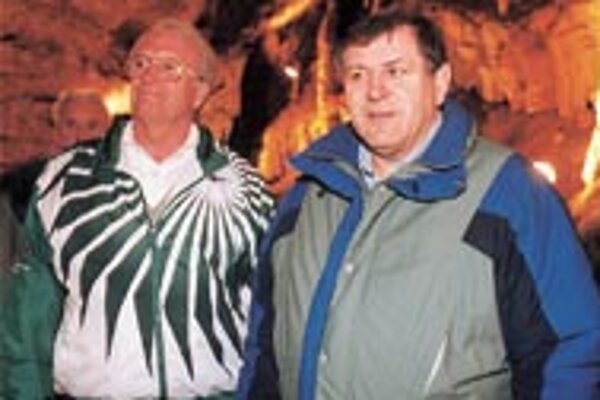 Font size:A-|A+0
January 3: Volkswagen signs an agreement to open a new factory in Nitra with an investment of "tens of millions" of German DM. The 1,200 employees will build electrical systems for VWs.

Jan. 25: Premier Vladimír Mečiar announces that privatization of the four largest Slovak financial institutions (Slovenská Sporitelňa, Investičná a Rozvojová Banka - IRB, Všeobecná Úverová Banka - VÚB and the insurance company Slovenská Poisťovňa) will be completed by the end of February. Almost a year later, they are still not privatized.

March 5: The American firm K-Mart (Bratislava store below) announces the sale of its retail chain in the Slovak and Czech Republics to the British firm Tesco for $117.5 million.

March 31: VSŽ, the steel mill in Košice, obtains a syndicated loan worth $125 million, the first extended to a private Slovak business.

April 16: Slovakia rejects the European Bank for Reconstruction and Development's (EBRD) offer to fund construction of the nuclear power plant at Mochovce, signing a deal instead with Slovak, Czech and Russian firms for a Soviet-style reactor for $870 million. (Anti-nuclear protester below.)

June 14: Executives of Figaro, the leading confectionary producer in Slovakia, and Robert Blažek, managing director of one of Figaro's minority shareholders, forge a temporary truce as Figaro's general shareholders meeting ends. Blažek and other minority shareholders in Figaro clamored for the company's managers to explain why Figaro registered a loss in 1995 and to pay greater attention to share value (see graph above). "I'm happy, but I won't be happy long," Blažek says.

June 25:Under fire from the World Trade Organization (WTO), which called for full removal of Slovakia's import tariff, the Slovak delegation attending talks with WTO officials in Geneva announces it will eliminate the import surcharge by January 1, 1997.

July 15: Yazaki-Debnár, a Japanese-Slovak joint-venture producing electric wire-harnesses in Prievidza, says it will raise its initial investment from 55 million Sk ($1.9 million) to 500 million Sk ($6.7 million) despite "no government incentives."

June 27:The NBS once more tightens its monetary policy by increasing the repurchase rate and the reverse repurchase rate by 0.2 percent to 7.7 percent and 6.7 percent, respectively. The decision shows that the NBS prefers market-based measures to exerting direct administrative control of the money market.

June 27: Seven leading banks team up to forward the oil and gas refinery Slovnaft the largest non-government backed loan in Slovakia's history. The $250 million loan, arranged by Citibank, will be used by Slovnaft to finance a project that converts crude oil residue into petrol and kerosene.

August 1: In a sale symbolizing the government's policy not to allow foreign partners to privatize its most precious companies, the FNM decides to sell 45.6 percent of gas storage company Nafta Inc. in Gbely to an unknown company named Druhá Obchodná Inc. in Bratislava, for 500 million Sk. In contrast, the German firm Ruhrgas, the Austrian ÖMV, and the French Gas de France offered 500-600 million Sk more.

Aug. 5: At 5 a.m. hundreds of Slovaks line up at RM-System offices in Bratislava (below) and across the country to trade for cash the 10,000 Sk bonds they had received form the government in place of coupon booklets. Many leave disappointed, since no FNM-approved company offered to purchase them. "The majority of them don't know exactly what the RM-System really is," said Dariana Huttová from the exchange's press office. "Many assume we are the entity that buys them."

Aug. 31: "The End of Boring Television?" The private television station TV Markíza, with an investment of over $33 million, hits the airwaves.

Sept. 18: VSŽ in Košice signs a deal with the Czech steel mill Třinecké Železárny for cooperation and partial ownership swap, despite Czech fears that the deal enables VSŽ to muscle in on the Czech steel market. "It's only a question of time before Slovak capital will stop being regarded as the enemy in the Czech Republic," says Ján Smerek, Chairman of VSŽ's Board of Directors.

Sept. 20: The FNM agrees to buy back the $59 million worth of global shares that the EBRD bought in Slovnaft in August 1995 after EBRD officials complain that they paid 1,000 Sk per share, while the FNM sold a 39 percent stake in the oil and gas refinery to a group of Slovnaft managers for only 165 Sk per share.

October 2: The NBS rebuffs VSŽ's formal bid to acquire a 20 percent stake in IRB despite persistent reports that the steel giant has already acquired 43.7 percent of the bank through its web of daughter companies.

Oct. 13: Former Minister of the Interior Ľudovít Hudek is appointed to VÚB's Board of Directors. The financial community widely regards the appointment as a political move by the ruling Movement for a Democratic Slovakia (HZDS), of which Hudek is a member.

November 6: Deputies in Parliament pass a new amendment to the Securities Act enabling capital shares to be traded on a "dematerialized" or anonymous basis, sparking fears of decreasing transparency of ownership and accountability.

Nov. 16: The Constitutional Court bans the FNM from further direct sales of state property, but does not invalidate previous sales.

Nov. 23-25: A delegation from the Organization for Economic Cooperation & Development (OECD) visits Slovakia, but refuses to pinpoint when Slovakia will enter the elite global economic club. (OECD's Jean-Claude Paye below)

December 10: The Securities Act amendment, heavily criticized by market analysts when it was passed on November 6 and later vetoed by President Michal Kováč, is restored to virtually its original form.

Dec. 12: A high-ranking official at the Finance Ministry confirms that the Slovak government will apply for its first loan and assistance package from the World Bank as the Washington-based Bank's delegates wrap up a 10-day factfinding visit to Slovakia.