Entrepreneur and FNM compromise on sale of brewery

Rudolf Mosny, the Slovak-American entrepreneur who signed a contract four years ago with the state privatization agency the National Property Fund (FNM), that would have given him almost complete ownership of the Šariš brewery in east Slovakia, has found himself in a game of brinksmanship with an organization whose officials he does not trust but who hold the shares he needs to take control of the company.
The case boils down to a simple money for share transaction. Under the terms of a contract Mosny and FNM officials penned four years ago, Mosny had to pay the Fund by June 1996 $10.7 million as the first installment to acquire the 79 percent of shares in the brewery owned by the FNM. Succeeding payments would follow on a quarterly basis over the next 10 years totalling $16.3 million. 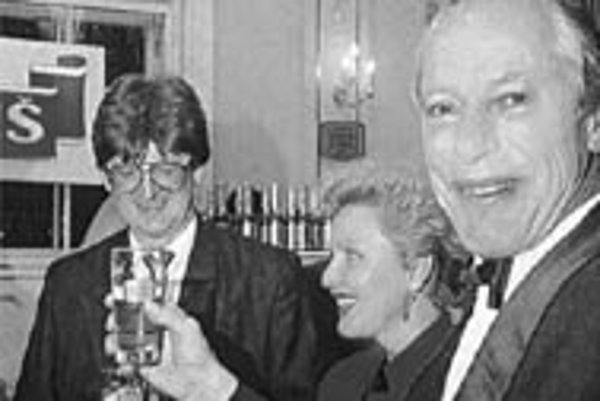 Font size:A-|A+
Rudolf Mosny, the Slovak-American entrepreneur who signed a contract four years ago with the state privatization agency the National Property Fund (FNM), that would have given him almost complete ownership of the Šariš brewery in east Slovakia, has found himself in a game of brinksmanship with an organization whose officials he does not trust but who hold the shares he needs to take control of the company.

The case boils down to a simple money for share transaction. Under the terms of a contract Mosny and FNM officials penned four years ago, Mosny had to pay the Fund by June 1996 $10.7 million as the first installment to acquire the 79 percent of shares in the brewery owned by the FNM. Succeeding payments would follow on a quarterly basis over the next 10 years totalling $16.3 million.

But as the June deadline approached, Mosny grew skeptical whether he actually would get his shares and tweaked his contractual obligation to pay the money directly by putting it into an irrecovable letter of credit. "According to Slovak commercial law," Mosny said, "if one party has doubts about the other, it does not have to pay until they give irrevocable proof of performance of their obligation. We expressed our full intention to perform our obligation by putting the money in the form of the irrevocable letter of credit against the Fund's performance of their obligation."

"We exercised our option, notified the Fund, and have shown every intention of making our payment" through Mosny, Ltd.'s account at Creditanstalt.

The "performance" that Mosny, 46, was referring to was that the Fund would transfer the shares after he paid them, a scenario Mosny was not willing to risk. "I was afraid of giving them the money," Mosny told The Slovak Spectator, "when there was absolutely no recourse to getting it back, and then have them jerk us around."

According to Mosny, who left Slovakia for the United States in 1974 to visit his sister "and didn't come back," Fund representatives tried to impose their will on corporate decisions, though Mosny's contract with the agency stipulated that he, though a 18 percent shareholder, was responsible for all management decisions. "The contract stipulated that as the manager, I had the power to make all appointments," Mosny said. "[But] the Fund tried to call a general stockholders meeting to make new appointments to [Saris's] Supervisory Board, which could then recall [the company's] current management and change them. That was in violation of our contract but it made us nervous that it would gain control of management and try to kick us out."

FNM officials, while declining repeated attempts to be interviewed for this story, apparently did not appreciate Mosny's tactical shift to the letter of credit. Without any prior warning, Fund officials announced in late November that they were selling the FNM's shares in Saris to a waste-disposal firm in Prešov on the basis of a promissory note for half the price which Mosny had agreed to pay originally. Asked why they weren't selling them to Mosny, Fund representatives said that Mosny failed to buy the company on time. Mosny countered by launching a media campaign accusing the Fund of violating the contract. "The Fund attempted to void the contract by hiring legal counsel to find a way out of their obligations in it," Mosny told The Slovak Spectator, saying he had "classified information" confirming the move.

Mosny insisted his contract with the FNM was still valid, saying that an irrevocable letter of credit is "accepted throughout the civilized world" and that he notified the privatization bureau before he made the change. But he heard nothing until the FNM announced its sale to Mix. "We didn't hear from [the FNM] until it announced in the press that it had sold the majority share" to Mix, Mosny said. "We subsequently sent eight letters to FNM, all of which are unanswered to this day."

But Mosny was still in a bind, as his hopes of obtaining virtual entire ownership of Saris was dimming. His company, Mosny Ltd., bought 18 percent of Šariš to become the company's minority manager in 1992; since then, Mosny, Ltd has teamed up with the Austrian brewery Ottakringer and taken Šariš from seventh to third place in the Slovak beer market.

On December 11, Mosny met with FNM's Executive Board Chairman, Ján Povraznik, and other Fund officials to resolve what Mosny called "a legal technicality" by which ownership of Šariš could be transferred only on the basis of individual shares rather than the total (or "summary") shares at stake. But it was more importantly a time for both parties to assess each's intentions in finalizing the past deal.

Mosny confirmed that at the meeting FNM agreed to "transfer the shares within a specific timeframe," but, "before we release payment, we want a written statement from the Fund" guaranteeing the transfer to Mosny. In exchange, "We have agreed to pay through a direct transfer of money prior to the transfer of shares." Mosny did not say whether this also means that FNM agreed to change the procedure by which the company's ownership may be transferred to Mosny.

The day after Mosny's meeting with the FNM, Alexander Pereszlenyi, Mosny's associate at Šariš, told The Slovak Spectator that Mosny would pay for half the shares "immediately," with further installments provided "over the next ten years or invested in Šariš, according to the original contract."

But the deal won't be consummated until the 45-year-old entrepreneur has the FNM's written guarantee in his hands, and the FNM has $10.7 million in its bank account. "There has been no victory for either side," Mosny said. "The Fund finally has explained its position and has indicated that it is not prepared to accept anything but a direct transfer of payment prior to a transfer of shares."

Even if both sides honor their obligations, though, what FNM representatives agreed to with Mix could substanitally complicate the whole affair. "The most important question is whether the Presidium ever agreed to the decision to sell Šariš to MIX," said Ivan Mikloš, who was the minister of privatization when the deal was first signed. "If this is the case, then it is not possible to change [the decision] without the Presidium's full consent."

"Presently there are nine members of FNM, six of whom are from HZDS, two from the Slovak Workers' Party and one from SNS. That means FNM is totally under the control of the [ruling governmental] Coalition. These in turn elect the Executive Committee. The Executive Committee has the power to sign agreements with companies to privatize state entities. This decision must then be approved by the full Presidium."

"Our original agreement called for distribution of summary share certificates to the amount of $10.7 million USD Mosny told The Slovak Spectator, "with succeeding installments to be paid on a quarterly basis over ten years." Mosny must pay $27 million USD to acquire total ownership of Šariš.

"Since summary shares are no longer available," Mosny continued, "we have to register individual shares at Bratislava's Stock Exchange. That's just a technicality that has to be amended before ownership can be transferred. Technically, the Fund would have to change or amend the contract to transfer the shares."

"I have obtained classified material from some officials who warned me about this intention. The material indicates the Fund's intention to seek legal ways of cancelling the contract that we signed with them. They violated a bona fide international agreement."

Mosny did not exercise his option to buy Šariš until last June, however-two weeks before the deadline. Asked why he waited so long, Mosny said, "It doesn't matter whether it's the first day or the last day. We opted for the last day."

After obtaining the letter of credit in June, a source at a Western-based bank who requested anonymity explained that an irrevocable letter of credit (sometimes known as a "global note") "is like a raincheck. For example, when you go to the store and they don't have what you want, and they give you a note that says you can buy it later when they have it in stock. . . Instead of buying 79 thousand shares, [Mosny] bought one share representing that sum. Basically it's a form of IOU."

"Normally letters of credit are used in trade finance," the source continued. "If your buying commodities, for example, letters of credit are more common as a form of payment. . . For buying shares in a company, it is a bit unusual, [although] the terms or conditions can be manipulated a lot nowadays."

Asked to assess whether Mosny had won or lost on the deal struck last week, Ivan Mikloš, the Slovak Minister of Privatization in then-Prime Minister Ján Śarnogurský's government four years ago, said, "Mosny is the winner, but the Presidium of FNM must still officially decide this. The interesting thing is that this contradicts the decision of the FNM Presidium, which is the only body with the official competance to decide about direct sales."

Asked what signal to foreign investors the case sends, Mikloš said, "There is nothing surprising or new about this. This case is only one of hundreds that show that privatization under this government is full of corruption, group interests and lack of transparency. I think it sends a signal that there is no chance to gain some property according to the Slovak privatization process. The result is the decreasing level of foreign investment."