Two of Slovakia's most well-known businesspeople discussed the challenges and issues involved with doing business in Slovakia on December 5 in an event called Spectrum Live, the third in the Debates for Democracy series organized by The Slovak Spectator. Karol Konárik, who is both the owner of KK Company, which brews Martiner beer, and an MP for the governing Movement for a Democratic Slovakia (HZDS), and Jozef Majský, the president of Sipox Holding, one of Slovakia's 10 most profitable companies, were the featured participants of the live debate held at Bratislava's Štúdio S theater. 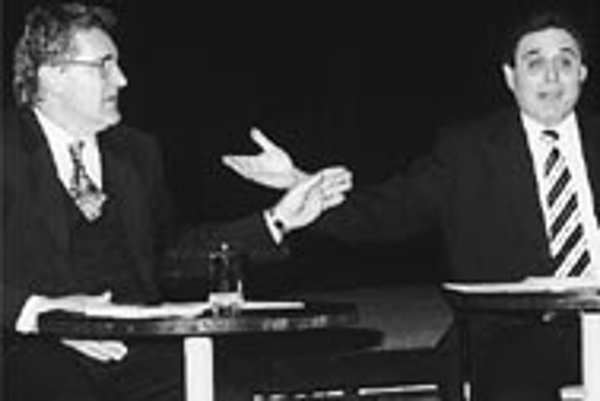 Two of Slovakia's most well-known businesspeople discussed the challenges and issues involved with doing business in Slovakia on December 5 in an event called Spectrum Live, the third in the Debates for Democracy series organized by The Slovak Spectator. Karol Konárik, who is both the owner of KK Company, which brews Martiner beer, and an MP for the governing Movement for a Democratic Slovakia (HZDS), and Jozef Majský, the president of Sipox Holding, one of Slovakia's 10 most profitable companies, were the featured participants of the live debate held at Bratislava's Štúdio S theater.

Andrea Vadkerti of TV Markíza served as moderator, and questions were posed by a panel of journalists, including Jana Dorotková of the Associated Press, Martin Lengyel of Radio Twist, Tatjana Lesajová of Slovak Television, and Ivan Podstupka of the daily Pravda. Below are excerpts from the event, which was sponsored by Šariš brewery, KNO Worldwide, AJ Ozap, Trend, and Radio Twist.

Dorotková: Mr. Majský, in 1992 you were the main sponsor of HZDS, which, thanks to its victory in the elections, has reached the position that it currently holds. I'd like to ask two questions. Do you regret supporting them in this way, and why did you stop supporting them?

Majský: It's true that I sponsored the movement when it was in its formative stages, but it wasn't because I wanted to be an adherent of any particular party. I wasn't really keen on any party, as I'm convinced that business people shouldn't really be politically aligned. That period was quite an unusual and pleasant one. Although the parties were the same as they are now, people used to meet each other at receptions and events or meetings of different kinds, and no one was concerned about whether a person was from this party or that one. The main reason I helped the HZDS was that I have known the prime minister for more than 30 years, so I wanted to help him - as a friend.

Dorotková: You haven't told me whether you regret having supported the party, and why you stopped supporting it.

Majský: I don't regret it, because I think that one party or another has to triumph over the others, but I do regret the fact that things turned sour a little, and I'm convinced that if you'd told the prime minister in 1991 that the things that are going on at the moment would be happening, he would have killed you. So things have gotten a little out of control and slipped through his fingers. I don't usually regret anything. I do, as I always do, things rationally and logically, and not emotionally; so... no. I think that things will calm down; every revolution brings all sorts of things to the surface of a previously calm pond; some things then have to be removed, for the water to be clear again, so the fish can return. We just have to be patient.

Podstupka: What will the consequences for Slovakia be if it enters the European Union or, alternatively, if it remains outside the union, from the commercial or economic perspective; there is even the threat at the moment that they will remove our associated country status.

Majský: Again, I believe that we can prove more by argument. Slovakia undoubtedly belongs in European structures, this is even stated in the government's program, which has been approved by Parliament; this document wasn't drawn up by idiots - it was a clear formulation of the belief that Slovakia must get into those European structures, but we can't sit on two stools. Mr. [Ján] Ľupták [chairman of the Slovak Workers's Party] says we should be independent, some other person says we should join European structures, another one says we should be talking with the Russians about neutrality. We can't do it like that. I'm convinced that Slovakia belongs in Europe. We have more university and high school graduates per thousand inhabitants than Switzerland. There are five and a half million of us, all told; if we look at all the small countries in the world, Singapore, Thailand, Hong Kong, Taiwan, they're all economic tigers.

When you look at the educational capacities of our people, it's a tragedy that we can't feed and look after this small country. So we clearly need to enter European structures. It's unthinkable that we will get into the European Union in some second wave - that's just non-existent, because we're witnessing a political separation of Europe into east and west. We can't do anything about it. That's how I perceive it and that's how people who think about it deeply perceive it too.

Podstupka: And how are we doing at the moment?

Majský: From the OECD information that you mentioned about our losing associated country status, if that's how it turns out, then VSŽ Košice won't take six months or nine months to crumble, but three months. But if the OECD does choose another member, perhaps it will be Korea and not us. Political instability is very bad. I'm not saying that we don't need strictness once in a while, but we need a different political culture here. We need a bit of diplomacy. When I'm trying to persuade someone of something, I can't belt him around the block, metaphorically speaking. I have to be nice to him.

You can't have [Chairman of the Joint Slovak-European Parliamentary Committee Herbert] Bösch praising the President's speech in Brussels, and then have the government - which may hold whatever opinion it likes - then say to [Bösch], when a lot depends on him, that it didn't like the speech. I would be quiet - and say what I really think in private. Tactical errors are being made, and it has a big effect on us.

As for NATO, I see only a 1 percent chance [of Slovakia being admitted in the first wave], because the government's program isn't being implemented. I gave it a lot of support when I read it for the first time, I breathed a sigh of relief. You could see that it had been drawn up by professionals. But then the facts are different. And if we don't get into European organizations, our economy doesn't have a chance. I could give you plenty of arguments and facts demonstrating why.

Podstupka: Corruption is widespread in our society. I want to know whether you agree, and whether, in the current stage of transformation, this phenomenon can be removed or restricted to a minimal, bearable level?

Konárik: It's a complex process, because after all, we had "you know what" here for 50 years. All of a sudden, we got a certain amount of democracy, and all sorts of doors are opening. And of course, mistakes are being made. Corruption is everywhere, and always has been. People are bribable everywhere in the world, just as here in Slovakia. In some places it's talked about more, and some less.

Of course, I too find some of the things happening at the moment unpalatable, such as tax evasion. I didn't encounter that in my 20 years' experience abroad, in Germany for example, or Sweden. It doesn't exist. Tax evasion ranked second after murder. But in Slovakia we don't take it that seriously. So we don't know who is involved in corruption. That's what we have the law for, if it's a provable offense, we have laws that say should be done with that person.

Dorotková: Mr. Konárik, you have said that it's important to respect contracts. The Constitution is a basic contract which every MP has pledged to uphold, as every citizen must do. Your governing coalition often passes laws which turn out to be unconstitutional. One very important law on privatization was recently declared unconstitutional by the Constitutional Court. After the events of the long parliamentary session of November 3-4, 1994, you threatened that if legislation were to be created as it was that night, then you would voluntarily cede your mandate. Do you think the situation has gotten better? Do you think your government is creating good conditions for business?

Konárik: I'm not a lawyer. I can only say that when someone does something, it's easy to make mistakes. And when we make a mistake, we have to rectify it quickly. It's the same in business - when you make a mistake, you have to correct it, because otherwise you have to pay for it. And so it is with legislation. We approved the 'penalization' law, which I said was nonsense, because it hampers and destroys businesses.

A lot of mistakes have been made, but that's a normal process, for heaven's sake. Why are we so unhappy about that? The state doesn't have any money at the moment, but if the state treasury were full, then we'd have all sorts of ways to help businesspeople. It would be great if taxes were only 10 percent, and I could invest more and give less to the state, but then what about pensioners, schools, culture, and development? So that's the way I look at it. It's difficult, because I'm not a lawyer.

Dorotková: But you're an MP who votes for these things.

Majský: It's true that mistakes are made everywhere, but 103 billion Sk worth of mistakes are pretty big mistakes. The National Property Fund has privatized 103 billion Sk. And I agree that privatization should be fast, but I don't agree with certain things. For instance, Ľupták got the magazine Slovenka. He's a friend of mine, I don't mean any malice, but imagine Ľupták running Slovenka! I keep saying that these aren't mistakes, it's just frivolous speculation; it isn't normal. Privatization can't go on like it's going now. These are exceptionally important matters which have been taking place and are still taking place. Privatization wasn't transparent, and that is the most important thing.

Lengyel: So, Mr. Konárik, will you be giving up your seat voluntarily?

Konárik: I know what you're aiming at. But I have always stood by what I have done in life, and the businesses I have started will always be close to my heart. I can't look on and listen to what is going on in Parliament, the nonsense - it's irrational. But I fear that's what we are like as a nation, we are so jealous of others. If I left Parliament, you know what they'd say? "He filled his pockets and skedaddled." But that's not true.

Translated and transcribed by Paul Kaye.