"We're showing theaters around the country that our demands are being met" Enraged with the Ministry of Culture over its widespread personnel changes at the Slovak National Theater (SND) and cultural institutions around the country, SND artists called a strike on October 2. A related movement called "Let's Save Culture" staged a rally on Bratislava's Námestie SNP that day. The artists suspended the strike two days later.
The Slovak Spectator's Tom Reynolds sat down with actor Štefan Bučko, spokesman for the SND strike committee to discuss the strike and its impact. 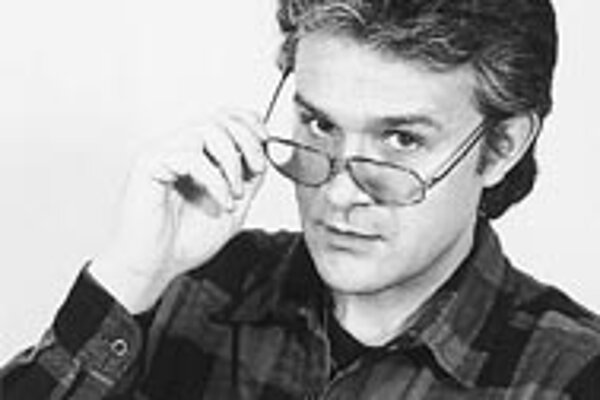 Font size:A-|A+0
"We're showing theaters around the country that our demands are being met" Enraged with the Ministry of Culture over its widespread personnel changes at the Slovak National Theater (SND) and cultural institutions around the country, SND artists called a strike on October 2. A related movement called "Let's Save Culture" staged a rally on Bratislava's Námestie SNP that day. The artists suspended the strike two days later.

The Slovak Spectator's Tom Reynolds sat down with actor Štefan Bučko, spokesman for the SND strike committee to discuss the strike and its impact.

TSS: Why did you suspend the strike?

Bučko:All three things we demanded were fulfilled. First, to reinstate Peter Mikulík as artistic director of the SND drama ensemble. He was nominated as its director. Second, that SND representatives would be at the audition for next season's new artistic director and that actors will make up 50 percent of the SND's board of directors. Third, that the Ministry of Culture give a reasonable explanation for the dismissal of Dušan Jamrich as National Theater director.

TSS: But Jamrich himself said the explanation the Ministry gave wasn't true. Is there a split, therefore, between SND strikers and Jamrich?

Bučko: According to the law, the Ministry doesn't have to give a reason [for dismissing the director or anyone else]; therefore, the fact that the SND wasn't satisfied with the Ministry's explanation is legally only "our problem." A new law will be proposed soon to deal with the Theater and we are waiting to see it before making our next move.

TSS: If you suspended the strike while effectively agreeing to continue with the regular performance season, will the SND's sentimental gesture on Jamrich's behalf pack the punch to significantly influence the government's policy towards the SND?

Bučko: We aren't still striking for Jamrich because our demands have been met. If a child asks for candy you can give him some, but if he then asks for chocolate and toys you shouldn't necessarily give it all to him. That's how we were afraid the public might have viewed our behavior if we had kept striking. Jamrich himself asked us not to continue the strike on his account. We are now asking theaters around Slovakia to join us [in renewing the strike] if the new law is not what we want.

TSS: Is there a difference of opinion between the SND and "Let's Save Culture" as to tactics, demands or goals to be made by the strike?

Bučko: No. "Let's Save Culture" agrees with all the tactics of the SND. The theaters are like a hill, with the SND at the top of the hill. We got Mikulík back, we got our own representative on the audition board [for artistic director of the drama ensemble] for next season, and we're showing theaters around the country that our demands are being met.

TSS: Is this a bigger issue than a personnel dispute between the Ministry of Culture and the Slovak National Theater? Is it rather a conflict between the state and the society, about the state's right to interfere in culture?

Bučko:The motivation for the strike originally was [based on] professional considerations; later, obviously with the rally, the strike gained political overtones. But originally it was all a matter of professionalism. Only now are local cultural institutions protesting the way the government is dealing with the artistic community.

TSS: What will you do if the law isn't what you or the artistic community wants?

Bučko:It's hard to predict what will happen, but at a meeting with the SND, all the theaters affirmed their support for the strike [should it be renewed]. The fact that we have 32,000 signatures on a petition doesn't in itself mean anything. We are hoping that when this new law goes to Parliament, the people in [local] theaters will finally wake up and do more than just voice their support.

TSS: What do you want them to do? Join with you in a nationwide strike?

Bučko: A nationwide strike can be a strong form of protest, but you must understand that when an actor doesn't perform, he loses the meaning of his life. In 1989 [when actors, students and many others went on strike against the socialist regime] it was different, because then, when we went on strike we had multitudes of people supporting us. Now, people are afraid.

Now, after every performance [by the SND], an actor stands and delivers an address to the audience explaining the situation, why we went on strike, how the strike is still in effect, and what our hopes are for the future. They usually receive a standing ovation.

TSS: What's the difference between what you're doing and what Jamrich tried to do?

Bučko:We went on strike because we wanted to change the situation, and we thought this was the best way to do it, despite the fact that we could all have been fired. Maybe one day they would ask us to give them back all the money that we could have cost them by suspending the performance season. Each of us made the decision to strike for ourselves.

Fifty people [initially] decided to strike. Now, people say that we shouldn't have gone on strike. We made this decision knowing that we had no public support. Later, some cultural organizations from the Czech Republic affirmed their support.

TSS: If you had kept on striking, could you have increased your "public support"?

Bučko:We did not end the strike, we only interrupted it. We're waiting. The strike has not ended. Now, we're doing this in cooperation with the civic forum, "Let's Save Culture." We can't continue the strike if our three demands were met.

TSS: Was the way Jamrich handled this crisis the right way, or should he have been more aggressive?

Bučko: To look back now is hard. We supported Jamrich totally, and he had our trust. I think he was sufficiently radical to start this process and to be the spirit of this movement. He educated our community; whether he could have been more radical was for him to decide, but I don't think he could have acted differently.