The abrupt departure last month of Leighton Klevana, president of the Slovak American Enterprise Fund (SAEF), has raised questions about the future of SAEF's investments and administrative structure, and what the sudden shift in leadership portends. A high-level source at SAEF has assured SAEF's partner enterprises that Klevana's departure is no cause for alarm. "As far as the investments are concerned, their legal standing will not change." Denis Brown, SAEF's new president, declined to comment on why his predecessor left the fund or to speculate on what direction SAEF's investment strategy will take. Brown would say only that SAEF's interim Board of Directors is "reviewing [and] evaluating" SAEF's portfolio, but that to issue a statement now on SAEF's future policy, or on projects currently assisted by the fund, would be "premature." 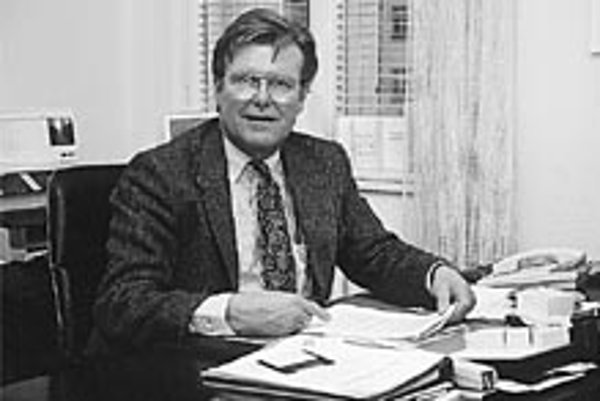 Font size:A-|A+1
The abrupt departure last month of Leighton Klevana, president of the Slovak American Enterprise Fund (SAEF), has raised questions about the future of SAEF's investments and administrative structure, and what the sudden shift in leadership portends.

A high-level source at SAEF has assured SAEF's partner enterprises that Klevana's departure is no cause for alarm. "As far as the investments are concerned, their legal standing will not change."

Denis Brown, SAEF's new president, declined to comment on why his predecessor left the fund or to speculate on what direction SAEF's investment strategy will take. Brown would say only that SAEF's interim Board of Directors is "reviewing [and] evaluating" SAEF's portfolio, but that to issue a statement now on SAEF's future policy, or on projects currently assisted by the fund, would be "premature."

While Klevana was not available to comment on the conditions under which he left his post, his wife, Gail, described the couple's future as "bright." A source close to SAEF suggested that Klevana, a lawyer by training, may start his own firm in Slovakia.

Klevana's former associates at SAEF and the Czech and Slovak American Enterprise Fund (CSAEF), which oversees SAEF and its counterpart in the Czech Republic, recalled Klevana's charismatic leadership and down-to-earth approach to managing SAEF's investments, but suggested that Klevana's strong points as a leader and public relations manager of SAEF may ironically have contributed to his downfall as the fund's chief executive.

"When you invest in companies, you tend to get emotionally involved and not look at them objectively," said one former SAEF employee. "Leighton felt very personally about the investments, [and] had close personal relations with many of the entrepreneurs. Because he felt like an owner of these companies, it might have made him more lenient when it came to them paying off their debts."

The same source described Klevana as being "very upset" when told in July to lay off about ten people at SAEF, and that Klevana was discouraged and upset by the low return on SAEF's investments. "Leighton was very good to the employees and put 100 percent into [directing the fund]. I saw how much he put into it and I know how he felt about it. I know he was very upset about how things were going."

Bill Scherping, the chief financial officer of CSAEF in Washington, D.C., said, "Leighton did a terrific job of bringing to [SAEF] the kind of attention that it really needed."

"He generated a name for it, so that people knew it existed. But a lot of the things they invested in did not turn out, and I think the Board decided to bring in some new management."

"Leighton was more of a public relations person than an investor," said the former SAEF employee. "He was a lawyer, not a venture capitalist [and] the Board felt that much of the portfolio were bad investments. That could have been Leighton's fault, because he was [SAEF's] president, but he was no financial wizard, so those failed enterprises could have been the fault of the [CSAEF] Board that appointed him in the first place. You really can't point the finger at anybody. He did approve the decisions, but everything he decided was approved by the [CSAEF] Board of Directors in Washington."

John Vrba, general manager of Thermal Laminates Corporation in Europe, a U.S.-based firm that applied for a loan from SAEF three years ago to produce windsurf-boards in Slovakia, told The Slovak Spectator that he "was happy they had chosen a new manager, and very pleased that it would be a financially oriented person, as opposed to say... somebody from Washington who's been a lawyer for 20 years." "That's not what any of us needs. I don't mean there's anything wrong with being a lawyer, [but] I don't think he was involved in the investments."

An example was if SAEF wanted to pull out. "There was no exit strategy [enabling SAEF to extricate itself from failing ventures], whether by management buy-out or a public offering [of shares in an enterprise]," said the former SAEF employee. "Usually, when you write a venture capital contract, you have an exit strategy written into it, [but] in the beginning nobody considered how much return on an investment SAEF would get."

Scherping stressed that SAEF's losses resulted also because it was high-risk venture capitalism that had been called for in the SEED (Supporting East European Democracy) Act passed by the U.S. Congress in 1989 - the legislation that created CSAEF, and later SAEF (as well as other venture capital funds throughout the former Soviet bloc). To finance such activities, Scherping said, a different standard had to be applied to choosing start-ups to invest in than in funding other types of businesses.

Money management was an even bigger problem at CSAEF, where its entire Board of Directors resigned in February amid charges in the U.S. that CSAEF was throwing millions of U.S. taxpayers' dollars down the drain in a misguided attempt to galvanize the Czech and Slovak private sectors. SAEF's senior investment officer, Douglas Swaim, told The Slovak Spectator in an interview in --- that SAEF's basic charter had been unshaken by the public furor.

Perhaps wishfully, Swaim observed "a conscious evolution of [SAEF's] criteria and thinking about the investment target," from initially backing high-risk enterprises to more balanced, measured venture capitalism. "We're going to turn [SAEF's troubled investments] around and get our money back," Swaim said at the time.

But Swain didn't last long enough to make good on his prediction. A source close to SAEF in Bratislava said that after a visit to Slovakia by CSAEF's interim Board of Directors in ----, CSAEF's interim CEO, Kim Davis (whose tenure on the board expired September 30), decided to "remove" both Klevana and Swaim for what the source called "a lack of competence." Swaim stepped down in July, the same month that Klevana was reportedly upset about having to fire several of his employees. "Swaim might have been a fall-guy," the same source said.

"Doug Swaim was the most continuous person on the fund," Vrba said, "and our relations [with him at SAEF] continued until he left."

Opinions diverge as to SAEF's future structure, and the future of its portfolio. "Restructuring SAEF will be Mr. Brown's primary focus," Scherping said. "There's an effort to place the decision-making authority in each of the countries where a fund operates. The CEO will have greater administrative responsibility over each fund."

"One problem all the funds have is very high overhead on their investments," Scherping continued. "To keep the expense level down, one strategy is to put executives into the field, which [CSAEF's] Board feels would yield better investments in general. We pay the phone bills, but as to the actual taking of equity positions and so on, all that is done in Bratislava."

Asked to describe specifically how SAEF will improve its investments, the source at SAEF replied, "indexing equipment and repairs, bringing in IESC [International Executive Service Corps] volunteers, [and] using the resources that we have to make [the investments] more profitable. One of the duties of these volunteers, besides tracking the investments of the fund, is to decide how to make the company more productive. This is one duty among many."

"Once Denis feels comfortable with the steps the investment officers are taking to monitor the investments," the source continued, "he'll make a very considered decision."

Asked what that decision could be, James Parrish, president of IESC in Slovakia, did not know. "It would be hard for me to give you a definitive answer to that, because I haven't got a definitive answer yet from Mr. Brown. I need to know whether these programs will include investing in equity or loans before I know what we're going to do."

"Money doesn't save a company," Parrish continued, seemingly hoping SAEF would pay attention. "People save a company. We can do critical restructuring, but if we don't go inside the structure, if we don't provide incentive and motivation, then we're just going to be doing the business like we did before, and use up all the money like we did before, and be in the same situation we were in before."

"We'll be making a very carefully considered decision on what kinds of projects to pursue, [and] what our investment policy will be," the same source at SAEF said. "Our decision will be very clearly stated." Brown said a decision on SAEF's investment strategy would be revealed in "thirty to forty days."

"I don't think anybody really believes they were just throwing money away," Scherping said. "As for the risk involved, that's the nature of the beast. . . The fund's whole purpose was to get the experience out there in the field where it could be used to make an impact. . . Hopefully, we're having the kind of impact that is so successful the fund will no longer have to exist."

"Economies change over time," Scherping continued. "Organizations [also] change over time, and we're no different." "Uncertainty is bad for any business," said "It didn't cause any operating problems, but it made my job a bit more difficult.

Asked if that "evolution" has been disrupted by Klevana's departure, the source at SAEF responded, "The new leadership hasn't changed that evolutionary process. It may have taken [the process] in a different direction, but the term 'evolutionary' is still very valid."

James Parrish, , disagreed with how the source portrayed his association's relation to SAEF. "To be honest with you, I think your source is incorrect," Parrish told The Slovak Spectator. "I'm not disparaging consultants, but there's a difference between consultants and practical experts."

"I just had meetings with Mr. Brown to find out what's their maximum [and] minimum equity in investments, and what kind of loans they'll be making," said. "The reason was to see how they were planning to restructure their portfolio, [so we could] see how we could help. Asked how SAEF's investments could further "evolve," Parrish responded tartly,