Prime Minister Vladimír Mečiar's August 27 announcement of the resignation of three senior members of his Cabinet was surprising for both its swiftness and the widespread doubt over why the three were dismissed. Mečiar announced at the government's regular press conference that the three departing Cabinet officials were Foreign Minister Juraj Schenk, Economics Minister Ján Ducký and Interior Minister Ľudovít Hudek. The latter two are members of Mečiar's Movement for a Democratic Slovakia (HZDS), while Schenk was nominated to his post by the same party. Their replacements are Foreign Minister Pavol Hamžík, Economics Minister Karol Česnek and Interior Minister Gustáv Krajči. 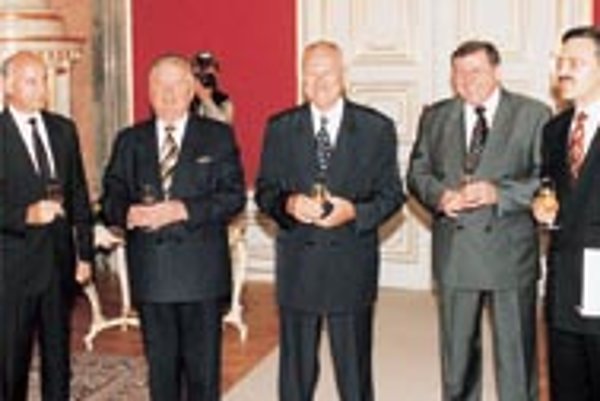 Font size:A-|A+
Prime Minister Vladimír Mečiar's August 27 announcement of the resignation of three senior members of his Cabinet was surprising for both its swiftness and the widespread doubt over why the three were dismissed.

Mečiar announced at the government's regular press conference that the three departing Cabinet officials were Foreign Minister Juraj Schenk, Economics Minister Ján Ducký and Interior Minister Ľudovít Hudek. The latter two are members of Mečiar's Movement for a Democratic Slovakia (HZDS), while Schenk was nominated to his post by the same party.

The changes were swift. Late on August 26, Mečiar with little advance warning showed up at President Michal Kováč's office to discuss changes in the government, for which the Prime Minister needs presidential approval. It was the first time the two had met in 14 months.

No names were made public until Kováč's office informed reporters of the swearing-in ceremony at noon the next day. Mečiar himself came down to say that the three ministers had all resigned for personal reasons.

But Vladimír Štefko, the President's spokesman, was surprised to hear Mečiar say that they had stepped down of their own volition. şşYesterday, there was no word of resignation," Štefko told The Slovak Spectator. "All the ministers were discharged.''

At the press-conference, Mečiar spoke highly of his departing Cabinet members. He said Schenk had been Slovakia's şşbest and most effective'' foreign minister. "He is leaving despite my plea to stay,'' Mečiar said, adding that Schenk gave up the post because of health reasons. Mečiar also praised Ducký, yet said the Economics Minister chose to leave after "evaluating the tasks that will be carried out in 1997 and 1998."

As for Hudek, he performed şşequally positively, with human and moral qualities.'' While Mečiar praised Hudek's reorganization of the state administration, the Premier said both were not satisfied with the situation in the police corps.

The departing ministers themselves were not immediately available for comment, and their spokesmen seemed to be as equally uninformed as the journalists.

Juraj Matejovský, Schenk's spokesman, refused to answer any questions concerning both Schenk's illness and his resignation. Jozef Šucha, Ducký's spokesman, insisted that Ducký resigned şşbecause of personal reasons.'' Asked if a specific incident led to Hudek's dismissal, his spokesman Peter Ondera would only tell The Slovak Spectator: şşI would like to know myself. If you learn something, just stop by and let me know.''

The inability of anyone to corroborate why the ministers resigned opened up a plethora of theories. Marián Leško, a political columnist for the opposition daily Sme, believes Mečiar had two reasons for discharging the same ministers he praised. şşHe discharged the ministers, because he does not want them in the government," Leško wrote August 30. "He praised them, so that he would not have to say why he does not want them.''

But one Slovak source close to the government who insisted on anonymity told The Slovak Spectator that Mečiar had specific reasons for replacing the three ministers. According to the source, Mečiar saw Hudek as unreliable, Ducký as corrupt by being pulled in the privatization game, and Schenk as wanting to resign a long time ago.

Hudek was not available for comment over the two weeks following his resignation. His dismissal was the least surprising, though. Police investigating the August 1995 reported kidnapping of the President's son Michal Kováč Jr. accused him of inhibiting the investigation.

In May, a private radio station broadcast an alleged recording of a phone-call between Hudek and the Slovak Intelligence Service Director Ivan Lexa implicating both men in covering up the kidnapping. The tape has yet to be authenticated.

Ducký and Schenk, however, met with journalists. Schenk said that he never planned to be a minister for a full term. He said the Prime Minister had known this from the very beginning. But he did not mention his illness as the major reason for his departure.

"I wanted to quit earlier," Schenk told The Slovak Spectator, "but the prime minister asked me to wait.'' Schenk, who returned to Comenius University as a full-time professor of sociology, refused to comment further Ducký vehemently defended himself against corruption allegations by saying that he is not a silent partner in any of the newly-privatized companies. şşI have never done that because one is not supposed to do that,'' Ducký said. When asked what policies in 1997 and 1998 caused him resign, Ducký said, şşThe tasks that will be carried out have not been evaluated yet.''

Fueling speculation that Ducký, Hudek and Schenk were forced out rapidly, the people taking their places told The Slovak Spectator they knew about their new jobs for a very short time. "A week ago I got the first message," Hamžík said after the swearing-in ceremony on August 27. "But I've known for sure since yesterday." Krajči said he had known of his appointment "for several days," while Česnek said: "You're not going to believe me, but [I found out] this morning."

Statements such as those also have caused the foreign press not to believe the government's reasons and to enter the guessing game. For the most part, they speculate that Mečiar replaced the three ministers in an attempt to improve Slovakia's image abroad.

If that was the case, Ducký became a scape-goat for the lack of transparency in privatization; Hudek's departure was to create an impression that the government is really interested to properly investigate the president's son kidnapping, and Schenk's is because of alarm that Slovakia is either teetering on the precipice of not being included on the first group of countries widely considered to be invited into NATO and the European Union or is now scrambling to get back on the lists.

According to Suddeutsche Zeitung, Schenk had to go because of the kidnapping case. He şşaccused the Austrian judiciary of being a political servant, by which he admitted that he himself is unable to imagine existence of an independent judicial system,'' wrote the German daily.

But Slovak journalists for fear of printing rumors that could result in a lawsuit, aren't trying to prove much of anything. şşIt is the prime minister's thing why he chose to replace three key ministers. He does not have to explain anything,'' wrote Juraj Hrabko in Sme. "All the rest of us can only guess - it was to improve the image of Slovakia abroad, it was due to illness, inability, fear, or because Mečiar did not sleep well.''

The attitude of the western diplomats posted to Slovakia is quite reserved. "We'll wait and see,'' one diplomat said, denying to have any closer information on the reasons behind the cabinet changes. "Only one man in this country knows.''