In an exclusive interview, The Slovak Spectator sat down with the President of the Slovak Republic, Michal Kováč, last month after his return from attending the Summer Olympics in Atlanta and his vacation in the USA. The following are excerpts from that interview.
TSS: Why do you think Prime Minister Vladimír Mečiar does not like you?
Kováč:Because our opinions on the democratic nature of governance, the nature of governance as a whole, are too different. Our opinions also differ on the question of ethics in politics, and on issues of diplomacy and political practice in general. 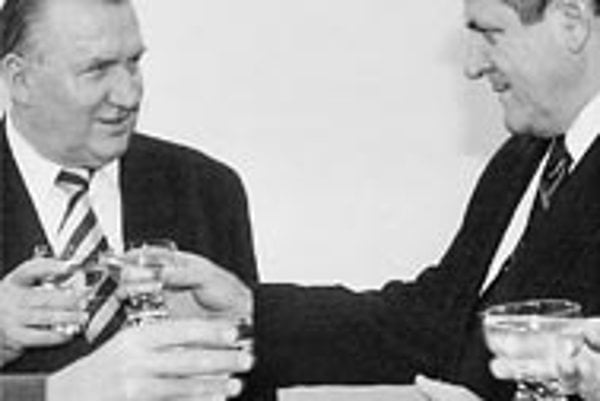 Font size:A-|A+0
In an exclusive interview, The Slovak Spectator sat down with the President of the Slovak Republic, Michal Kováč, last month after his return from attending the Summer Olympics in Atlanta and his vacation in the USA. The following are excerpts from that interview.

TSS: Why do you think Prime Minister Vladimír Mečiar does not like you?

TSS: Different opinions on democracy. What does that mean?

Kováč:The opposite of what Mr. Mečiar practices. To cite an example: Mr. Mečiar has excluded the opposition from effective means of supervising government activity. This is undemocratic, because if the opposition has no means of overseeing the actions of the government, serious errors can occur as leeway is opened up for subjective decision-making and irresponsible rule.

Secondly, we have different ideas about what and whom the public media are supposed to serve. By public media, I mean those media that influence the greater part of the population of this country - television and radio. These cannot be in the hands of the government or the ruling party, but should be controlled by the wider public. People who are clearly inclined to follow a certain party or political organization should not be working in these media.

Similarly, it is very important in a democratic country that the opposition have the opportunity to supervise the secret service. In Slovakia it is not under any supervision whatsoever.

It is also important to ensure independence in the inquiries carried out by the public prosecution service. If the principles of legal statehood are to be adopted, if the rule of law is to take root, then laws must respected by everyone, including state bodies. When a state official breaks the law, he must be as liable to prosecution as the ordinary citizen in the street. This principle is not being applied in Slovakia. Several investigators and prosecutors are trying, as in past regimes, to pander to the will of the prime minister, and are not respecting the will of the law.

TSS: You were at one time in the same party [HZDS] with Premier Mečiar. Were you two close, did you socialize together?

Kováč:No, we were never close in that way, and I don't think that this just applied to me, but also to the other vice-chairpeople [in HZDS], although we did attempt to create ties other than merely those that were necessary for our political interaction. But Mr. Mečiar was never that interested. So our relationship was a proper one, but we did not form any personal or family friendships.

TSS: Do you regret that you made that March 1994 speech in Parliament that led to the downfall of Mečiar's second government?

Kováč: There is nothing to regret, because when one is convinced that it is necessary to make such a speech intended to defend liberty and democracy and thus the interests of the people, then one cannot feel regret, even if subsequent developments are different to those envisaged, and it appears that one was acting needlessly or hastily. But I am convinced that positive acts to protect basic human rights and liberties are necessary when there is the feeling that these freedoms are under threat, regardless of how a particular section of the public reacts to these acts. I would certainly do the same again.

TSS: Can the United States be convinced that Slovakia belongs in the first group of countries to enter NATO?

Kováč: I think so. We have a very peculiar prime minister. It must be understood that many of the problems we have today result from his attitudes and opinions. When the United States and European countries see this, they will find that Slovak society is not radically different from those of any other of our neighbors. Slovakia's peculiarity lies in just one personality, and all difficulties connected with this are temporary phenomena.

TSS: The decision on NATO membership will be made in early 1997. Is there still time?

Kováč: I think there is still time to convince [NATO members]. And I know that the opposition wants to get the governments of the USA and Europe to ask themselves this question: Which solution will help the development of democracy in Slovakia? Whether Slovakia will be excluded from talks, or whether, despite the problems that exist, it will be invited to participate. I am sure that the second option provides much greater opportunities. If the first solution were chosen, it could cast us into isolation and would suit those who have strange notions of how government should be run. They would feel less pressure. They would feel they have more room to develop their vision of government.

TSS: Looking to the September Parliamentary session and Mečiar's statement that the opposition will be included in parliamentary oversight committees and that there will be changes on the radio, television and National Propoerty Fund oversight boards. Do you think these things will happen?

Kováč:I too expect that the changes Mr. Mečiar announced will be implemented. I hope that they really will have a positive effect on the future of our country, that they will not be cosmetic in character or merely a superficial indication that things are changing.

TSS: What will indicate that the changes are for real?

Kováč:If there is a dialogue and it is constructive, this will mean that the changes have taken place. If the confrontation continues, this will indicate that they have not.

TSS: Many people identify you with the opposition, as a person who represents their views on democracy. Do you feel comfortable in that role?

Kováč:I believe that I represent my own opinions. It's another thing then to ask whether my opinions coincide with those of the opposition. I was one of the first to criticize the way the government 's power was being exercised in Slovakia, and I was pleased to discover that I was not alone in feeling this, that others were also experiencing the same problems. I don't think one could say that I have put myself in the role of opposition leader.

TSS: Will the public ever find out who kidnapped your son?

Kováč:We know who abducted him. It's just a question of proof. We'll be able to prove the guilt of the perpetrators when Slovak laws are fully respected, when state investigators and the prosecution are not dependent on the prime minister. We will succeed. One day we will achieve this state of affairs.

TSS: What is your reaction to the fact that your slander case against Premier Mečiar has been tabled.

Kováč:Well, I have made a complaint against this deferral, as I believe that the ruling is incorrect. My complaint will be dealt with by the state prosecutor [Michal Vaľo]. It will be a test of his independence - whether he will come out on the side of the law, or whether he will succumb to the will of the prime minister, as the investigator did in this case.

It is a lesser evil to uncover problems when they do occur. The public is beginning to develop a feeling for what is democratic and what is not, what is in line with our laws and what are not, whether the state prosecution and investigation service is or is not independent, and what needs to be done about it.

TSS: Do you think that the case of you suing the prime minister [for slander and defamation of a public official] has worsened Slovakia's image?

Kováč:Slovakia's image will be tarnished if redress is not forthcoming, if the prosecutors and the investigators feel compelled to carry out the government's wishes and not the law. If this is all hushed up to improve the country's image, then a disservice has been done to democracy in Slovakia.

Mečiar's side of the story

When The Slovak Spectator asked for a response from Prime Minister Vladimír Mečiar, Spokeswoman Magda Pospíšilová said: "Mr. Mečiar will not react to Mr. President's statements. That is not his style. If the President does not realize that his statements will appear in an international newspaper, that's his problem. You know the Premier is busier than the President, he has more duties."