With row after row of vacant parking spaces separated by swaths of scraggly lawn, the lot outside Richard Frimmel's office window is a student driver's paradise. But since auto school training grounds do not bring in revenue, Frimmel, the mayor of Bratislava's Nové Mesto district, has been ambitiously seeking investors to develop a grand complex on the space. This past June, he found his man. Andrew Sarlos, a Canadian investor of Hungarian origin, committed 6 billion Sk ($200 million) to a business, administrative, and cultural complex that would include three towers of more than 20 floors each. But while the announcement justified Frimmel's lofty goals and salesmanship, it also raised the question whether the project is too big for Bratislava. 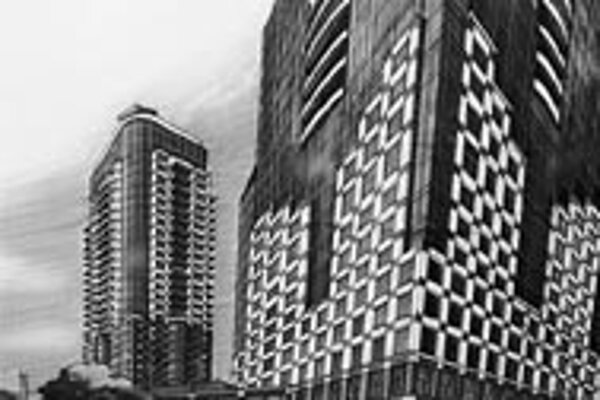 Font size:A-|A+
With row after row of vacant parking spaces separated by swaths of scraggly lawn, the lot outside Richard Frimmel's office window is a student driver's paradise. But since auto school training grounds do not bring in revenue, Frimmel, the mayor of Bratislava's Nové Mesto district, has been ambitiously seeking investors to develop a grand complex on the space.

This past June, he found his man. Andrew Sarlos, a Canadian investor of Hungarian origin, committed 6 billion Sk ($200 million) to a business, administrative, and cultural complex that would include three towers of more than 20 floors each. But while the announcement justified Frimmel's lofty goals and salesmanship, it also raised the question whether the project is too big for Bratislava.

The sales pitch, initiated in 1992 by Frimmel's predecessor and heightened after he took office in 1994, focused on the plot's strategic merits. The effort emphasized the land's proximity to highways, its location adjacent to major recreational facilities like the AŠK Inter soccer stadium and Kuchajda lake, and the size of the plot, which is larger than almost any others closer to the city center.

Other advantages were that to one side is the Nové Mesto train station and to the other is Bajkalská bus station. While both are only secondary hubs for the capital city, they are connected to major lines. The plot attracted interest, according to district chief architect Jaroslav Kocka, from developers in Austria, Great Britain, and other countries, but they did not think ambitiously enough to match Frimmel's vision. "Some wanted small and others wanted mid-sized projects," said Kocka.

About 100,000 people come to Bratislava each day for school, for work or for business, according to numbers gathered by Frimmel's office. Given these figures, Frimmel said he expects 45,000 people to flock to the complex daily.

The project is a joint venture between Nové Mesto, which will contribute the land, and two Toronto-based firms that will finance it, Sarlos's Central European Investment Corporation (CEIC) and Trizec Corporation, one of North America's biggest real estate developers. Sarlos said two-thirds of the cost will be covered by bank loans, while the remaining third will be direct investment from CEIC and Trizec. Financing details could take 15 months to finalize, he added.

Kocka said that once construction starts, expected to be in 1997, it should not take more than two years to finish, thus placing a completion date sometime just before the millennium.

As it was introduced in June, the complex would take up four of the six available hectares of land, with the three towers standing in a triangle and a two-story shopping complex between them.

One of the two 22-floor towers will house a world-class hotel and convention center with a globally-known name like Hilton or Sheraton, according to Gábor Zászlós, CEIC's general manager for the Slovak and Czech Republics. Skeptics said that any vacancies in the city's hotel market will be filled by the Holiday Inn, which is supposed to open in the coming weeks, and the Hotel Carlton, which is planned for refurbishment in the coming years. But Zászlós dismissed the potential lack of demand, stressing that a top-quality hotel in a modern complex is needed "so that businesspeople don't stay in Vienna and take a taxi here to do business."

The other 22-story tower is slated for office space, which Frimmel said has already attracted interest from banks and embassies. "As of October 1995, there were 98 diplomatic missions accredited in Bratislava, but only 16 of these had full embassies here," Zászlós said. "We want to provide the others with facilities." Among the amenities Zászlós said the office tower will include will be a fully equipped security system. "There will not be an old man sitting at the entrance, but a professional security guard with electronic systems," he said.

Filling the 25-floor tower at the center-rear of the complex will be exclusive condominiums that Zászlós expects to go to the likes of embassy employees and top company managers.

But Ivan Chrenko of HB Reavis realty agency, for one, doubts the housing market can bear a tower of expensive apartments. He said penthouse perks are not enough for most Bratislavans. "The 21st floor of the VÚB building [currently under construction] moves 3 to 7 cm on a windy day," he said. "Nobody in Slovakia wants to live up there." Chrenko also said he thought the tower view will be hampered by the Istrochem refinery, while privacy will be hindered by stadium crowds. "Slovaks who can afford a flat for 3 million Sk want to have a house, a swimming pool, and live in the forest," Chrenko concluded.

Chrenko has reason to be critical, since HB Reavis is developing the 400 million Sk, 15,000 square meter Bratislava Business Center, scheduled to open in January on Prievozská ulica. His agency's brainchild will find direct competition in the Nové Mesto complex and its 40,000 square meters of retail space, plus swimming pool, fitness center, and cinema. The vision is, as Kocka said, a place where "you can spend your whole day with your family, doing business, shopping and exercising." Chrenko is not alone in his belief that "44,000 square meters is too much."

The city does not seem convinced either. "I hope they will not go bankrupt," said Milan Vajda, the press secretary for Bratislava's City Hall. "Of course, we look forward to the project's success. It would be a good sign for doing business in Bratislava."

It would also be a good sign for CEIC's future prospects in central and eastern Europe, across which Sarlos said the company plans to erect 25 major complexes. The Nové Mesto project is the company's second behind the 5,000 square meter Bank Center the firm opened earlier this year in Budapest's historic core. Future ideas for sites could include Košice, Brno in the Czech Republic, and locations in Hungary and Romania.

While Sarlos is convinced Bratislava is ripe for a chic complex of this type, he said financing and market demand questions such as, "What can we pre-lease and what can we pre-sell?" still need to be answered. He assured that CEIC is being prudent, saying, "We are not going to build it until we know we can," but he said the issue is now only "how big, not whether or not."

Frimmel, for his part, has bought into the philosophy that one must dream big to succeed big. "I don't think it is just a dream, but if it is, we will make the dream a reality," Nové Mesto's mayor said. "People can criticize before we do it, but if we let criticism stop us, we will never get anything done."