The Hague to rule on Gabčíkovo

Two decades into the long saga of the Gabčíkovo dam project, an end has finally come into sight: After almost two years of waiting, Slovakia and Hungary will present their cases before the International Court of Justice in The Hague, the Netherlands, on February 17, 1997. The center of the dispute is a 1977 treaty that outlined plans for a massive hydroelectric power station on the Danube. Stretching from the Slovak village of Gabčíkovo to Nagymaros on Hungary's Danube bend, the system of two dams was to provide a cheap, almost unlimited source of power. 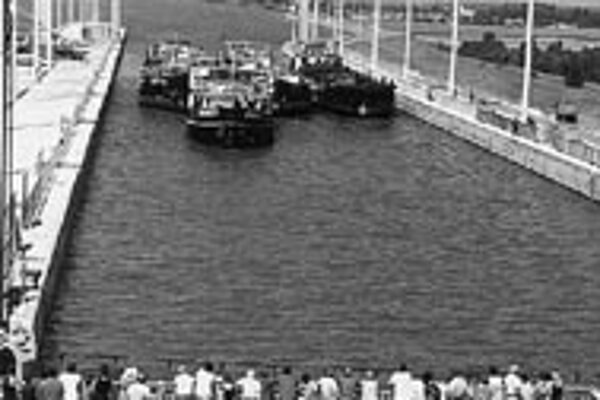 Font size:A-|A+
Two decades into the long saga of the Gabčíkovo dam project, an end has finally come into sight: After almost two years of waiting, Slovakia and Hungary will present their cases before the International Court of Justice in The Hague, the Netherlands, on February 17, 1997.

The center of the dispute is a 1977 treaty that outlined plans for a massive hydroelectric power station on the Danube. Stretching from the Slovak village of Gabčíkovo to Nagymaros on Hungary's Danube bend, the system of two dams was to provide a cheap, almost unlimited source of power.

The two dams were to book-end the river's "inland delta," a 17-kilometer web of river branches that twist across the international border. Both sides were to share the proceeds of the project equally in terms of consumption and sales. But while the Slovaks forged ahead with their side of the project at Gabčíkovo, the second dam was never built, because Hungary halted construction on Nagymaros in 1989.

Today, Slovakia claims Budapest had no right to break the treaty by abandoning construction, and owes 30 billion Sk in lost revenue. The Hungarians argue that Slovakia was not entitled to come up with its own solution to the problem by damming the river on Slovak territory. It is up to the court to decide who is right.

The first sign of trouble for the project came in the 1980s, when the Hungarian government asked for a 10-year delay due to lack of funds. Both sides had been promised loans from the Soviet Union that never materialized, and while the Slovaks managed to set money aside from their share of the Czechoslovak federal budget, the Hungarians had virtually nothing.

"From the beginning there were financial troubles on the Hungarian side and, to tell the truth, on our side too," said Miroslav Liška, chief of public relations at Vodohospodárska Výstavba, the company managing the Slovak end of the project. "But finally we decided to go on."

After all, the project kept people employed and held out the promise of cheap energy. "We had building companies with 10,000 employees," said Miroslav Bohuš, an ecologist with Comenius University in Bratislava. "Such a monster needs big projects and this was a big project."

Later in the 1980s, two Austrian firms revived construction on the Hungarian side. But Budapest remained hesitant, especially when confronted with increasing pressure from local environmental groups, whose protesters insisted that the project would destroy the region's fragile ecosystem. Hungarian citizens in the area also voiced objection on the grounds that the Nagymaros weir, to be located under the ancient Hungarian fortress at Visegrad, would be an eyesore.

Those arguments convinced the Hungarian government to halt construction in 1989, just as the socialist governments in both countries started to crumble.

The fall of Communism also impacted the Slovak side, for just as the Slovaks were on the verge of completion, the centralized funding mechanism dried up. "All Gabčíkovo was about 90 percent complete" Liška recalled. "So just before it started to work, it was stopped." Terminating the project at that point, however, would have resulted in losses totalling about 80 percent of the country's annual budget; Slovakia was determined to keep Gabčíkovo alive.

Slovakia chose variant C, and took matters into its own hands. Vodohospodárska Vystavba headed upriver, and, at a cost of about 9 billion Sk, dammed the Danube on the Slovak side at Čuňovo. The structure, officially called 'the provisional solution' by the International Court of Justice, directed the river's flow into a new shipping channel on Slovak territory, effectively moving the Danube north while leaving the border in place.

The new flow of water powers eight turbines at Gabčíkovo, producing 2.4 billion kilowatt hours of energy that is worth a total of 240 million DM each year. Hungary receives none of these profits, and the Slovaks say they are "holding" the Hungarian's 14 percent share to cover the damages due.

"We produce only basic energy at Gabčíkovo," explained Liška. "Half of the benefits of the full system would be much greater. We keep [Hungary's profit] as an account of damages because every year we get a lower income than we would if the system were completed according to the treaty."

According to Július Binder, the director of Vodohospodárska Vystavba and the driving force behind the project, Slovakia's case in the Hague will be based on its claim of damages.

"There is a proverb in Slovakia that when God wants to punish a neighbor, he will give him a bad neighbor," Binder said. While the Slovak side tried to work out all other alternatives before heading to court, he said, now there is no other option.

However the court decides, it remains to be seen how the decision will play out. If the balance tips in Slovakia's favor, Hungary may have to either fork over the money or begin construction again. If the scales swing the other way, Slovakia might have to give up a major source of its already stretched energy supply.