At four o'clock on a Monday afternoon, the factory floor at ZŤS Dubnica, once Slovakia's largest arms producer, is empty and silent. A handful of blue-suited employees tinker with quiet machines while forges glow untended, and the tree-lined paths that weave between warehouses feel deserted. "In the past, there used to be two full shifts, sometimes three, working here," said ZŤS Personnel Director Milan Strapko. "You used to always meet people walking through the factory complex. But now there is mostly just one shift a day." 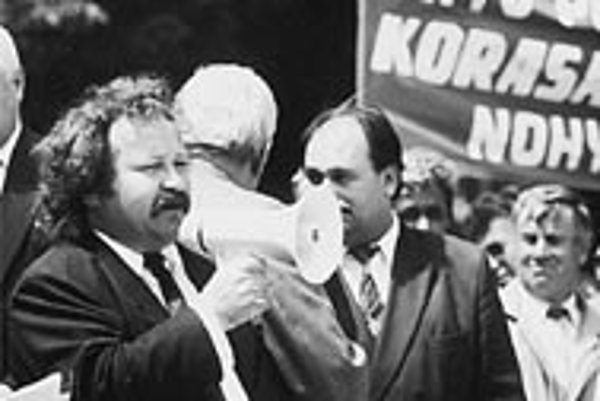 Font size:A-|A+
At four o'clock on a Monday afternoon, the factory floor at ZŤS Dubnica, once Slovakia's largest arms producer, is empty and silent. A handful of blue-suited employees tinker with quiet machines while forges glow untended, and the tree-lined paths that weave between warehouses feel deserted.

"In the past, there used to be two full shifts, sometimes three, working here," said ZŤS Personnel Director Milan Strapko. "You used to always meet people walking through the factory complex. But now there is mostly just one shift a day."

Dubnica's story is not unique - the post-communist conversion from "special production" sent once-bustling plants all over Slovakia spiralling towards bankruptcy and scrambling to make saleable goods like tractors and hydraulic lifts. Saddled with 3,500 workers and 4.5 billion Sk in debt, ZŤS, like the other weapons work horses that used to carry Slovakia's economy, wants to cut loose some of its nonessential employees. But the mere suggestion last month that 2,000 ZŤS employees should go sparked protests on both the local and national level.

During the height of the Cold War, 15,000 people worked at this factory that sprawls across five square kilometers of Slovak countryside. In those salad days, over 85 percent of production was dedicated to making tank ammunition, howitzers, and infantry vehicles for the Warsaw Pact nations.

When the Iron Curtain came down in 1989, however, the Czechoslovak federal government had no need for tanks and guns, and quickly began the closure (optimistically called 'conversion') of all of its arms factories. Over the next three years, ZŤS' armaments production plunged to almost zero.

"This Velvet Revolution was not really velvet for the company," said Pavel Kuruc, the leader of ZŤS's labor union. "The effects on the company and its people were not so good." Even before '89, he explained, the factory planned to make fewer weapons.

"But the quick and hard solution from the federal government wasn't expected," he added. "The results can still be seen today... From the revolution to today, every change of management has solved its problems the same way, by laying off employees," he said.

The number of people employed at the plant slid from 13,880 in 1989 to 5,665 this May. That's when the state-owned company became a joint stock corporation (the state still owns 100 percent). The new management released a production plan calling for only 3,500 workers, and the national labor union sent a petition to the government in response.

On July 9, Dubnica employees made the national spotlight by protesting in front of the government offices in Bratislava, demanding that the 2,000 extraneous employees not be let go. This time, the government listened: in the last week of July, labor and management met with Oľga Keltošová, the minister of Labor, Family and Social Affairs, who promised the plant 83 million Sk from the Employment Fund to pay people instead of firing them.

"We say that to keep the plant functioning, there were always and should be 5,600 workers here, as there are now," said Kuruc, speaking for the labor union. He went on to explain that the group understands the need to restructure ZŤS's workforce. "We don't want there to be layoffs; but if it has to happen, we want there to be some reason for the change."

Maybe they are drinking coffee

The solution, however, is only a stopgap for the next six months. According to Strapko, the company wants to shift its production and employment structure. At last count, he explained, only about a quarter of ZŤS's employees actually worked on the factory floor. The new management wants to move closer to a ratio of 40 percent production workers, 30 percent technological and finance jobs, and 30 percent administrators and service employees.

"We expect that in the future, because of the bad employee structure, a lot of workers won't have anything to do," he said. He estimated that, even with aid from the government, the plant will still have to let some 800 people go in the next year.

To compound the catch-22, there is a shortage of workers trained to take on more production jobs. Strapko pulled out the company's internal employment charts, which list hundreds of openings each month, especially in those production sections still doing well, like metallurgy and hydraulics.

"Some of the jobs that have been empty since April 15 are still empty," he said. There are people who have the skill, he added, "but they are sitting in another department and not doing anything because they just want to get money and not work for it...This is typical of the situation at other factories, too."

A local driver summed up the problem even more bluntly. "There were once 15,000 people at ZŤS and now there are only 6,000 - and even they don't do anything at all," he said. "Maybe they are drinking coffee - as long as they get paid they don't care about anything else."

Now ZŤS is trying to re-attract some of the skilled workers who flew the coop during the first wave of conversion in '89. But that will be no easy task, for many are thriving in business on their own. In fact, according to Juraj Červinka, Dubnica's mayor (and a former ZŤS employee), 3,000 people - out of a population of 27,000 - have registered as private entrepreneurs in the Dubnica area.

Another 2,500-3,000 residents commute a few miles north to regular jobs, most often service work, in the Czech Republic. In fact, Dubnica has a whole network of employment agencies specialized in placing workers, mostly across the border.

"Before people used to come here for work, but now people here go to the Czech Republic, Trenčín, Puchov, or Bratislava," Červinka said. The success of private business and the availability of work elsewhere has kept the level of unemployment low, he added. "Everybody is talking about this problem with ZŤS," he said, "but our unemployment rate is only eight percent."

That number, however, pre-dates the recent suggestion of layoffs. If the factory does eventually let go of all 2,000, Dubnica's unemployment rate will nearly double.

"Then the city will not be able to provide jobs or take care of them at all," Červinka said. That is a shame, he added, because the factory has always been closely linked to its surrounding town. The suburb of Nová Dubnica, a complex of 13,000 flats, was built in 1957 to provide housing for ZŤS workers; this year, the company donated 1,500 apartments, worth a total of 180 million Sk, to the city of Dubnica.

"My wife, son, daughter, and I have all worked at ZŤSÉ and my father-in-law also worked there," said the mayor. "The majority of the families here are like that. The company is really connected to the city."