Casting an eye toward the 1998 elections, three opposition parties have decided to unite and present an alternative bloc to Prime Minister Vladimír Mečiar's dominant Movement for a Democratic Slovakia (HZDS) party. The three opposition parties - the Christian Democratic Movement (KDH), the Democratic Union (DU) and the Democratic Party (DS) - have met five times since March with the goal of reaching consensus on a common political agenda by September. "These three parties are so close," said Roman Kováč, a DU vice-chairman, "and our goals are similar enough that we can cooperate together." 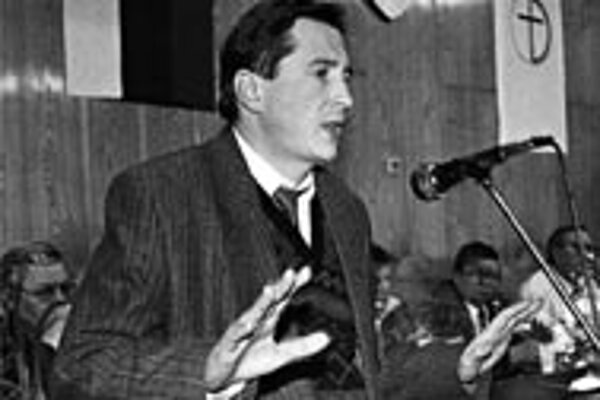 Casting an eye toward the 1998 elections, three opposition parties have decided to unite and present an alternative bloc to Prime Minister Vladimír Mečiar's dominant Movement for a Democratic Slovakia (HZDS) party.

The three opposition parties - the Christian Democratic Movement (KDH), the Democratic Union (DU) and the Democratic Party (DS) - have met five times since March with the goal of reaching consensus on a common political agenda by September."These three parties are so close," said Roman Kováč, a DU vice-chairman, "and our goals are similar enough that we can cooperate together."

While the triumvirate is unsure on what the final product will look like, they have apparently concluded that it's time to bury individual party jealousies and create what DS Chairman Ján Langoš called "a clear alternative to the non-democratic bloc," meaning Mečiar's HZDS-led government.

"Voters would see there are two equally strong parties. Right now, what they're seeing is HZDS with a huge percentage," Kováč further explained. "So if they vote for HZDS, they're sure they will win. But if we join together, voters will see that there's an equally powerful bloc and may put trust in us. You get a big bunch, and people will want more and more."

That point is backed up by the numbers. The latest survey done by the Focus polling agency in June showed that the trio together would capture 27 percent of the popular vote, virtually equal to HZDS's 28 percent shown by the poll.

The clear ingredient is that these three parties' election platforms are so similar on so many points as to be almost identical. As examples, they see eye-to-eye on ecomomic themes such as private ownership, less government regulation in economic affairs and the formation of a strong, independent capital market. They also are tete-a-tete on important social issues, such as decentralization, placing the individual first and independent social and health care.

This is not a bloc without at least one crack, however. Ivan Šimko, a KDH vice-chairman, backed the idea of forming a political triple alliance, but said his party must be the one calling the shots.

"I think it's too mechanical to think that we could add up the preferences of the three parties," Šimko said. "Of course, it could be done, but I must say that if integration doesn't start from the most powerful party, it's only an academic discussion."

Šimko also warned against letting public pressure dictate the discussions. "KDH is interested in cooperation among three political parties, but KDH doesn't want to have a political agenda of smaller parties," Šimko said in a naked shot to the DU and especially the DS.

"These parties must realize that KDH is a political party with a different view of some problems in Slovakia, and we have to first discuss these problems and not be under pressure to 'first integrate and then solve these differences.'"

Still, it's the poll results that no doubt energize KDH, DU and DS leaders. But they are unwilling to talk seriously about fusing their parties under a new name. Kováč called a full merger "a big mistake." "We would lose the elections," he added.

Asked why, the troika representatives cited a litany of reasons, but chief among them is their fear that voters would be confused in much the same way they were with the Party of the Democratic Left (SDĽ) in the 1994 elections.

Then, SDĽ, riding high with 20 percent popular support, created a four party coalition called "Spoločná Voľba" (Common Choice) that cratered when the votes came in, its coalition ending up with 10.4 percent of the vote. "We chose a name that hid all four parties," SDĽ deputy Milan Ftáčnik bravely admitted after the debacle. "People didn't know what Spoločná Voľba was."

The SDĽ has come some way since the horror of '94, shedding its three coalition partners and electing a new chairman in May, former Slovak Ambassador to the Ukraine Pavol Migaš. Along with a new chairman, a new political orientation of being neither opposition nor coalition was ushered in.

What that means is that at least for now, SDĽ, a traditional leftist party, is not interested in joining KDH-DU-DS, though it did stand side by side with the trio in the six-month-old coalition government headed by DU Chairman Jozef Moravč'k in 1994.

"SDL is between two rightist blocs," said its vice-chairman Peter Weiss, referring to HZDS and KDH-DU-DS. "SDL will try to offer a third force with the support of other leftist parties, such as SDSS [Social Democratic Party]."

Looking at other potential mates, an alliance embracing the coalition of three Hungarian parties, which according to the chairman of one has a lock on at least 10 percent of the vote would be downright enrapturous for those that support the bloc idea. That's because the Hungarian card would push an alliance on the brink of trump, giving it a total of around 47 percent, according to the June Focus poll.

But the reality is that the Hungarian coalition and opposition parties are far apart on the one issue that the Hungarian coalition cares the most: autonomy. And neither side is willing to give any ground. "The term itself is becoming a problem in Slovakia because Hungarian parties want autonomy, and we reject it as political concept," said the DS's Langoš. "I don't see a reason for someone having special rights when they live on Slovak land."

"All of us are fighting for the same goals," said Hungarian Christian Democratic Movement (MKDH) Chairman Béla Bugár, "but when it comes to the questions of minority rights, the opposition just puts its foot on the brakes."

Bugár, whose party is seen as the most flexible of the three on the sticky autonomy question, nevertheless added, "The opposition must understand that the entire Hungarian coalition will move together. We cannot afford for them to choose which party they want. If they don't want all of us, then goodbye."

But all of them - Bugár, Kováč, Langoš and Šimko - at least say they see the political reality in Slovakia, an actuality where Mečiar and his HZDS is keeping them on the sidelines, and if they want to get back in power, they need to beat him. "We're trying to build a government that even these parties will support and won't be against," Langoš said. "Today's 27 percent can be more, and that's what we're going for."