Vladimír Mečiar, Slovakia's ingenious political gambler and the country's prime minister, has again demonstrated that he is the one who pulls the strings, relegating other political leaders - including those in the opposition - to powerless observers. After two weeks of high political drama in which it appeared that the government coalition of Mečiar's Movement for a Democratic Slovakia (HZDS), the Slovak National Party (SNS) and the Association of Slovak Workers (ZRS) was on the verge of collapse, their leaders emerged from ten hours of talks on June 28 to pronounce that everything was fine. "The current ruling coalition remains," Mečiar told the press after the talks. 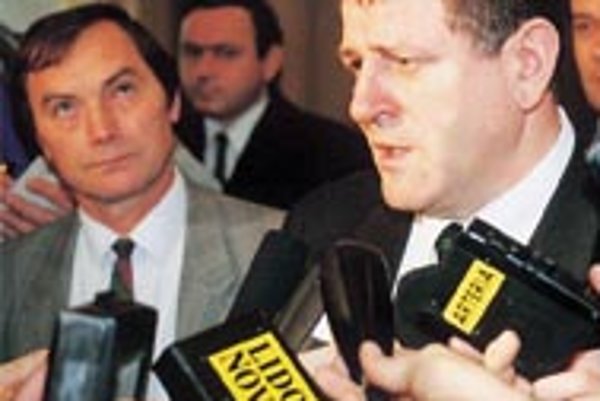 Font size:A-|A+
Vladimír Mečiar, Slovakia's ingenious political gambler and the country's prime minister, has again demonstrated that he is the one who pulls the strings, relegating other political leaders - including those in the opposition - to powerless observers.

After two weeks of high political drama in which it appeared that the government coalition of Mečiar's Movement for a Democratic Slovakia (HZDS), the Slovak National Party (SNS) and the Association of Slovak Workers (ZRS) was on the verge of collapse, their leaders emerged from ten hours of talks on June 28 to pronounce that everything was fine.

"The current ruling coalition remains," Mečiar told the press after the talks. Prior to that pronouncement, the tripartite coalition had gone through what Mečiar himself called a "coalition crisis" in which Slovak citizens were bombarded by a profusion of often contradictory statements from almost every political party.

The exceptional week was marked also by an odd rendez-vous between outspoken enemies HZDS and the opposition Christian Democratic Movement (KDH) and HZDS and the Democratic Union (DU), whose founding members broke from the HZDS in a celebrated departure that ultimately resulted in the downfall of Mečiar's second administration in March 1994.

Further spicing the drama were invectives issued by coalition leaders themselves, such as SNS Chairman Ján Slota's opinion that "we want a government with a different prime minister," and Mečiar's retaliatory salvo that "SNS is acceptable, but only without Ján Slota."

But by June 28, tempers had apparently cooled. "You see, I am not interested in what someone was rambling on June 27," Mečiar said in obvious reference to Slota's comment. "I think that other chairmen can confirm to you that nobody cares about it now."

Politicians' blood was boiling the week before, however. Mečiar, full of vigor after having been felled by a still-revealed illness for several weeks, turned the country's political scene upside down when he baldly stated that the ruling coalition is "not functional."

According to the prime minister, the SNS and the ZRS had been breaking coalition agreements "in everything" for several months. Mečiar refused to elaborate after the first-ever meeting involving leading representatives in most of the parties in Parliament but accused the SNS and ZRS leadership of being "under the influence of lobbying groups" and adding that their "national interests end in Slovenská Poisťovňa."

Mečiar's comments referred to the coalition's junior partners' unhappiness with the early June changes in the supervisory board and the board of directors of Slovenská Poisťovňa (SP), the country's largest insurance company that is slated to be privatized. ZRS and SNS, who together hold 21 seats in Parliament, were promised a hefty slice of SP in exchange for signing coalition agreements with Mečiar back in 1994, sources said.

They rebelled against HZDS (which has 61 seats), sources added, because the removed members were ZRS and SNS allies. The cannings were allegedly orchestrated by HZDS members of the board of directors of the National Property Fund (FNM), the state-run privatization agency. The FNM is SP's majority shareholder, holding 50.5 percent of SP's stock.

Mečiar's announcement about the coalition stunned his coalition partners SNS and ZRS, who said they saw the coalition as maybe a little tense but otherwise perfectly functional and had no intention to leave it. But they fought back in an unlikely place, Parliament. At the chamber's June session, SNS and ZRS backed long-standing opposition motions to include their representatives on the FNM's board of directors and institutions overseeing the Slovak Intelligence Service (SIS) and the state-run Slovak Television (STV), the most popular medium in the country. With SNS and ZRS backing, the opposition succeeded in including all these items on Parliament's June agenda.

An opposition gripped by fear

Mečiar's diagnosis that the coalition was ill, equally stunned the opposition, who are deathly afraid of Mečiar resigning and for early elections to be held (see story on page -). According to the latest polls, Mečiar's HZDS leads with 35 percent; the next closest party has one-third that. Perhaps sensing that fear, Mečiar told the press that he would not mind if Slovakia was forced to have early elections.

The Party of the Democratic Left (SDĽ), with 13 seats in Parliament, seemed to have been most scared of Mečiar's drive for early elections. According to Róbert Fico, chairman of SDĽ's club in Parliament, party representatives spent "long hours" discussing the situation with HZDS officials.

"Of all the opposition parties, we know best how close Mečiar was to resigning," Fico said when it became apparent that the divorce in Mečiar's coalition would probably not happen.

Fico insisted that SDĽ would have never joined a coalition with HZDS. But he said the party would have supported a HZDS minority government to avoid early elections. Fico added that SDĽ's condition for such support was that representatives of other opposition parties be included on the FNM's board of directors, and on oversight panels for the SIS and STV.

But the votes on those motions never came to pass. On June 25, SDĽ joined forces with all three coalition parties to suspend Parliament's session until July 1. The SDĽ's peacemaking tactics, while perhaps altruistic, angered opposition parties. Democratic Party (DS) Chairman Ján Langoš said that SDĽ only wanted to use the situation to be able to participate in privatization.

Ivan Šimko of the Christian Democratic Movement (KDH) said SDĽ "swallowed Mečiar's game." He said Mečiar "never wanted to leave the coalition. He was only testing how everyone would react. SDĽ's promise to support the minority government gave Mečiar leverage on SNS and ZRS, the KDH vice-chairman added. "In the end, [Mečiar] ingeniously knocked out both SDĽ and his coalition partners," Šimko concluded.

After the reconciliation talks in Trenčianské Teplice, Mečiar said that the changes in the FNM's board of directors will not occur until September, because they need to be prepared properly. And Slota said that his party was already satisfied with the enlargement of the SIS supervisory committee by one SDĽ deputy, though the motion approved in Parliament called for two opposition deputies to be named to the panel.

Mečiar also said that the coalition agreed to introduce a bill in Parliament outlining a new regional division for Slovakia, a proposal previously opposed by the SNS. Lastly, the SNS-proposed, controversial amendment to the Penal Code - the so-called Protection of the Republic bill - was also added to the parliamentary schedule when the chamber resumed July 1, Mečiar added.

Looking back, some political observers and opposition politicians speculated that the changes in SP's management and Mečiar's bombshell that the coalition was not working were all part of a calculated plan to achieve well-defined objectives. "Only Mečiar himself knows why it was necessary," said Marian Leško, a columnist for the anti-government daily Sme. "But he had nothing to lose and now he has it all: he has Slovenská Poisťovňa, more obedient coalition partners, as well as the knowledge that the opposition wants him to govern until the fall of 1998."

Western politicians have repeatedly warned Mečiar that treatment of the opposition needs to change to make the Slovak ruling coalition's commitment to democracy sound convincing. June 19, with the help of SNS and ZRS, the changes were included in the parliament's agenda for this session.