PRIME Minister Mikuláš Dzurinda has said he feels abandoned by his former Slovak Democratic Coalition (SDK) party mates in defending some ambitious - and unfulfilled - promises the party made to voters before 1998 elections.
Speaking in front of leading Slovak political, economic and social figures on May 9, Dzurinda admitted that several of the SDK's promises, including pledges to double the national average wage in four years and bring unemployment below 10 per cent, had been "too ambitious" to be met. 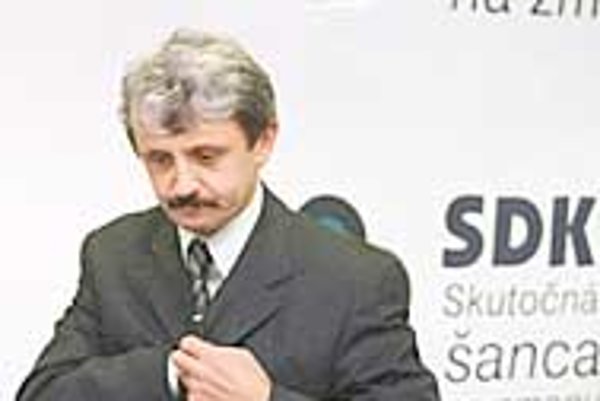 Font size:A-|A+  Comments disabled
PRIME Minister Mikuláš Dzurinda has said he feels abandoned by his former Slovak Democratic Coalition (SDK) party mates in defending some ambitious - and unfulfilled - promises the party made to voters before 1998 elections.

Speaking in front of leading Slovak political, economic and social figures on May 9, Dzurinda admitted that several of the SDK's promises, including pledges to double the national average wage in four years and bring unemployment below 10 per cent, had been "too ambitious" to be met.

The vows were part of a "Contract with Citizens" signed by members of the now-defunct SDK, a bloc formed in 1998 aimed at defeating the ruling Movement for a Democratic Slovakia (HZDS) party. Along with the nation's fatigue with life under the authoritarian HZDS, the promises helped catapult the SDK to power in October 1998.

Dzurinda argued that while he was ready to take responsibility for all 10 promises, the members of the five parties which founded the SDK "today don't remember" that they too had approved the commitments.

"Many of my former colleagues don't want to remember that they raised their hands for doubled wages and for a radical cut in unemployment. Our common mistakes no longer are their mistakes, and we're seeing a general use of opposition-style rhetoric and efforts to conceal old promises with new ones," Dzurinda said.

The prime minister blamed approaching elections in September 2002 for the reluctance of his former political mates to acknowledge their promises.

The Contract with Citizens was signed by SDK members on July 4, 1998, and contained 10 major promises. The document pledged that the SDK, once in cabinet, would work to improve the lives of the country's citizens because "people in Slovakia deserve a better life".

But the SDK collapsed in 1999 after infighting among its founding members, with Dzurinda himself being blamed for breaking up the bloc. Although the PM denied the accusations, some of his former SDK colleagues said Dzurinda and his new Slovak Democratic Christian Coalition (SDKÚ) party were most responsible for the cabinet's having missed its chance to improve standards of living during this election term.

Calling Dzurinda's speech "a manipulation of the facts", Peter Zajac, one of the SDK's founding members and now a member of the tiny Civic Conservative Party (OKS), said that the SDKÚ had "sunk in a sea of compromises".

Zajac said that the SDKÚ was to blame for making concessions to leftist parties in government that led to the sabotage of crucial reforms such as the decentralisation of public administration, or the belated acceptance of the cabinet's first economic austerity package in 1999.

In his speech Dzurinda said that concessions to the left had been inevitable given Slovakia's wide spectrum ruling coalition. Praising the SDK's observance of its promise to lower income taxes, he said the party had had to "conduct a fierce battle with the left in cabinet on the one hand... as well as with populists in parliament on the other".

"We have to realise that 100 per cent fulfilment of these promises would be possible only if the party ruled alone," Dzurinda said.

Much of the reluctance of the SDK's founding parties to accept responsibility for the unkept promises is due to the fact that three of them have less than one per cent popular support, and are battling to survive. On the other hand, the Christian Democrats party has said the fact it only has one representative in cabinet - Justice Minister Ján Čarnogurský - means that it should be called to account for the justice agenda only.

"Since the beginning in 1998, the Christian Democrats have had only one minister in the cabinet, and we're ready to account for that," said party chair Pavol Hrušovský.

The PM highlighted the SDK's promise to lead the country back onto the integration track with western alliances as having been "100 per cent fulfilled".

Slovakia's return to front-runner status for entry to the European Union and Nato is generally seen as one of the greatest achievements of the Dzurinda cabinet.

Dzurinda said that he was ready to take criticism for unfulfilled promises, but added that it was only fair he receive recognition for the promises the SDK managed to keep.

He asked his invitation-only audience to consider pledges as having been filled on a percentual basis, rather than as simply kept or unkept.

"We genuinely meant these vows, and we wanted very much to keep them. Some were eventually fulfilled by 40 per cent, like wages, some, like flat construction, were 80 per cent fulfilled, and there are areas of 100 per cent fulfillment," Dzurinda said, citing a promise to strengthen the police war on organised crime.

But the OKS's Zajac, while admitting that the improvement in Slovakia's international position had indeed been a success, argued that rather than the SDK's achievement, it had been a result of the work of the cabinet as a whole.

"To achieve that goal it was enough simply to observe the basic rules of democracy," he said.