WHILE growth in the number of small- and medium-sized enterprises (SMEs) in Slovakia has peaked, according to an Economy Ministry study, business people claim far more could be done to reduce barriers to increased SME production.
SMEs produced 47 per cent of Slovak GDP and accounted for nearly 60 per cent of all job positions in Slovakia last year, states the ministry's analysis of small and medium-sized enterprise.
Furthermore, the report says, more than 1.3 million people are employed by SMEs, an increase of 25 per cent between 1998 and 2001. 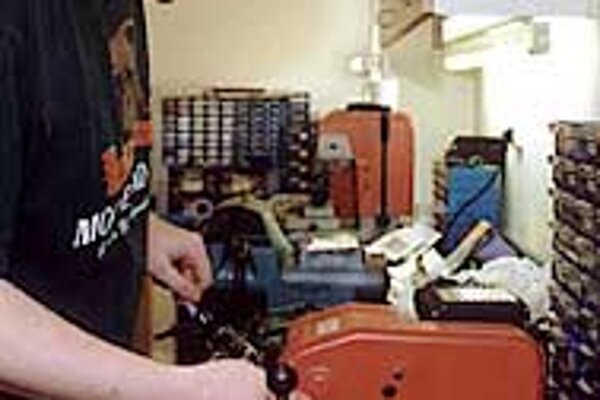 Font size:A-|A+  Comments disabled
WHILE growth in the number of small- and medium-sized enterprises (SMEs) in Slovakia has peaked, according to an Economy Ministry study, business people claim far more could be done to reduce barriers to increased SME production.

SMEs produced 47 per cent of Slovak GDP and accounted for nearly 60 per cent of all job positions in Slovakia last year, states the ministry's analysis of small and medium-sized enterprise.

Furthermore, the report says, more than 1.3 million people are employed by SMEs, an increase of 25 per cent between 1998 and 2001.

"Slovakia has the highest degree of SME economic activity among all the transition economies," said Marián Vitkovič from the Economy Ministry's business environment section.

Despite the apparent importance of SMEs to the economy, however, entrepreneurs say they can grow no further without better access to venture capital and reduced wage costs.

"So much is said about great support for small businesses, but I can't see it. Probably I'm looking in the wrong direction," said Karol Fajth, the owner of small bookstore in Bratislava.

The number of legal entities - organisations registered in Slovakia to do business - has grown nearly six per cent over the last four years to approximately 63,000, with small enterprises (those employing fewer than 10 people) accounting for 92 per cent of the total, and medium-sized enterprises contributed an additional 4.5 per cent.

Business experts said that SME growth was a result of several tax policy changes in the 1990s, and now held the key to solving Slovakia's 20 per cent unemployment rate.

"Despite all the problems it has, the SME sector is still an important source of economic growth," said Karol Pavlů, president of the Entrepreneur's Association of Slovakia. "No other sector has such a possibility to solve national employment problems."

"Big companies do not usually account for significant employment growth, they just concentrate on productivity. They prefer to invest into new technologies and equipment rather than new employees," explained Tóth.

Flat-rate taxation, which was introduced two years ago and requires a self-employed entrepreneur to record only his cashflow and property, not to perform a classical type of accounting, was a big part of growth in the sector, says Pavlů. Under the tax policy, businesses generating less than Sk1.5 million in annual revenue can pay as little as 1.5 per cent tax, compared to the 25 per cent corporate tax rate.

"The decrease in taxes and the implementation of the flat-rate tax for self-employed entrepreneurs were the main reasons for the improvement in SME growth," said Pavlů.

The Economy Ministry's Vitkovič added that the European Union's report on candidate countries evaluated flat-rate taxation as a positive step.

"Moreover, administrative and legislative conditions in Slovakia were adjusted in favour of the business sector and now are comparable with those in the EU. The company registration process has also become more transparent," said Vitkovič.

But Slovak SMEs themselves say the government could do far more to help what all claim is an important part of the economy.

Martin Sokol, owner of small locksmith service, said the state's economic policy favoured large, especially foreign corporations. "Some big foreign companies are getting decade-long tax holidays. I'm curious to know who's going to give tax holidays to me. Nobody!" he said.

Vitkovič acknowledged that many limits remained to SME growth.

"Total employment costs exceed wage costs by more than 50 per cent because of compulsory [employer] payments to social funds. So we can't be surprised that the majority of employers consider employing each additional employee very carefully, and that they solve this problem by illegal employment or unofficial wage payments," said Vitkovič.

Another difficulty for SMEs is getting access to venture capital.

"Only 14 per cent of Slovak companies are using external capital. Slovak banks have already started to take some steps to claim this market, but problems regarding collateral remain unsolved. I don't think this problem will ever be solved for small companies," said Vitkovič.

But no matter how long it takes to solve the problems, Vítkovič said, growth in the number of Slovak SMEs has stabilised.

"The structure of the Slovak economy didn't change for a very long time, but eventually the ratio of SMEs grew and lately reached its zenith. Now, these companies should concentrate on expansion."