Opposition's leadership shuffle is on

When Peter Weiss, the chairman of the Party of the Democratic Left (SDĽ) since 1990, announced he woldn't run for re-election at the party's congress next spring, it feuled speculation that discord within the SDĽ lingers on despite efforts to brush it aside. Weiss, 43, took the reins of the SDĽ in 1990, when the new-born party more or less took over as the successor to the Communist Party. Since then, Weiss has been one of the most consistent party leaders in post-1989 Slovak politics, but his is not the only opposition party changing at the top, as a leaders' shuffle has already taken off. 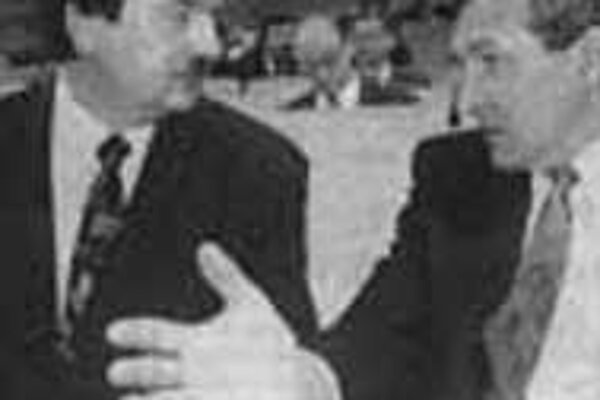 When Peter Weiss, the chairman of the Party of the Democratic Left (SDĽ) since 1990, announced he woldn't run for re-election at the party's congress next spring, it feuled speculation that discord within the SDĽ lingers on despite efforts to brush it aside.

Weiss, 43, took the reins of the SDĽ in 1990, when the new-born party more or less took over as the successor to the Communist Party. Since then, Weiss has been one of the most consistent party leaders in post-1989 Slovak politics, but his is not the only opposition party changing at the top, as a leaders' shuffle has already taken off.

On November 17, Ján Langoš, a parliamentarian with the Christian Democratic Movement (KDH), became chairman of the Democratic Party (DS). His election ensures that the DS, which did not win enough votes to enter parliament last year, will have a say in the legislature. On top of that, Democratic Union (DU) Chairman Jozef Moravčík may follow Weiss' decision and let one of his deputies take over his job.

Although Weiss gave no warning before his announcement, Pavol Kanis, an SDĽ vice-chairman, said he wasn't surprised. "Such a decision was ripe a long time ago," Kanis said. He said the SDĽ's internal turmoil is due to dwindling party membership that leaves it with just 10 percent of the members it had in 1990, severe financial troubles, and poor, single-digit showings in public opinion polls.

"The [parliamentary] election results confirmed that SDĽ policy in 1994 was not a success," Kanis said. "I personally think that Peter Weiss should have resigned right after the elections," Kanis concluded, strengthening rumors that Weiss made his decision from pressure within the party.

The SDĽ, it seems, still feels the pains of its 1994 election debacle. After the party voted to oust Prime Minister Vladimír Mečiar's cabinet in a parliamentary no-confidence in March 1994, it created a coalition government with the DU and the KDH. Cooperation, especially with the rightist KDH, stained the party's reputation in voters' eyes, Brigita Schmögnerová, a SDĽ vice-chairwoman, asserted.

"We didn't thoroughly explain to our voters why we joined the KDH in the coalition," Schmögnerová, said. "Many of them still remembered the cabinet led by the KDH in 1991-92 and its numerous statements, which were not very friendly to SDĽ."

Kanis called the coalition a mistake even before it happened. Now he says, "At that time, we were preparing for elections, not for seizing power. When a party wants to seize power, it has to have all power and personnel issues solved in advance."

Schmögnerová disagreed the coalition was a mistake, saying, "In March 1994, we didn't have any other choice."

This time, the SDĽ might want to join Mečiar's current government. Some party leaders, including Kanis, are playing with the idea. "I'm a politician who wants to change things," Kanis said. "But if you really want to change things, you soon find out that you can't accomplish that by criticism from behind opposition desks."

Schmögnerová, for her part, thinks joining the coalition could endanger SDĽ's whole orientation. If Mečiar's previous political paradigms are any indication, she may be right.

In spring 1991, Mečiar split the ruling Public Against Violence (VPN) in two and founded the Movement for a Democratic Slovakia (HZDS). Before the 1992 elections, he broke apart both the KDH and the Green Party (SZ) by encouraging their nationalist factions to form parties of their own. The persuading worked; two new parties, the Christian Social Union (KSÚ) and the Green Party of Slovakia (SZS) were born.

But only seven months after he established a coalition with the Slovak National Party (SNS) in summer 1993, Mečiar faced division in his own poltical backyard. The SNS broke apart, and a faction led by Ľudovíť Černák joined a Moravčík faction of HZDS, leaving Mečiar with a minority in parliament in March 1994. The SDĽ, along with the Hungarian coalition, is the only major party Mečiar hasn't helped pull apart.

But SDĽ's experience shows that a party doesn't need to cooperate with HZDS to face a schism. Some opposition politicians say the SDĽ's turmoil is due to its approach towards HZDS, when Weiss called on Mečiar to resign. Since then, the party's attitude has wavered. Today, many consider the vice-chairs to represent two factions within the SDĽ.

"I don't like such post-communist volatility, such a fuzziness of standpoints," said Ján Langoš, the newly-elected DS chairman. For Langoš, it doesn't really matter who gets elected SDĽ leader. "I only wish that next time there is a chance to create a ruling coalition without Mečiar, which will not be possible without the SDĽ," Langoš said.

Neither Schmögnerová nor Kanis seem eager to be SDĽ's new leader. According to both, a new chief should emerge either from discussions or a party referendum. Both think that the party's fundamental platform is more important than any leader's personality. "If the basic direction is clear, then I can even imagine a rotation of party leaders every year," Schmögnerová said. It's like in a team of horses. It doesn't matter who is in the lead as long as all are hitched up to the same cart and run in the same direction."

"I'm not an advocate of party coups," said Černák, the former SNS chairman who left after such a coup and has ended up, for now, as the DU's vice-chairman. "But in some parties, reshuffling a team of horses can help."

DU Chairman Moravčík has reportedly announced within his party his intention not to run for re-election. When asked to confirm whether the DU is preparing for a reshuffle before its March congress, Černák said, "At the moment I cannot confirm this information, nor can I deny it." But then he continued. "I think more candidates, including the present chairman, Moravčík, should run for party chairman." He said it's too soon to say whether he himself will run.

Assuming the SDĽ doesn't join the coalition, it is likely that three opposition parties will have new leaders next spring. When asked whether this could be a more general trend meant to bring forward opposition leaders who will be uncompromising vis-á-vis the ruling coalition's politics, Černák said, "It is possible."