Are the ideals of the Velvet Revolution still alive?

History teaches us that unequal development in human society is corrected in leaps - in emancipatory waves. At the end of 1989 in Malta, representatives of the victorious and defeated superpowers agreed to bring the world's first cold war to an end, not with a public document of capitulation, but in such a way that the defeated would have the right to a "soft" integration into a new system.
It was a decision made by superpowers, and it was a good thing that this "cold" but "soft" decision was made when Slovakia was having to make up for its inadequacies in many respects. From a past without sovereignty, Slovak society inherited four kinds of alienation: 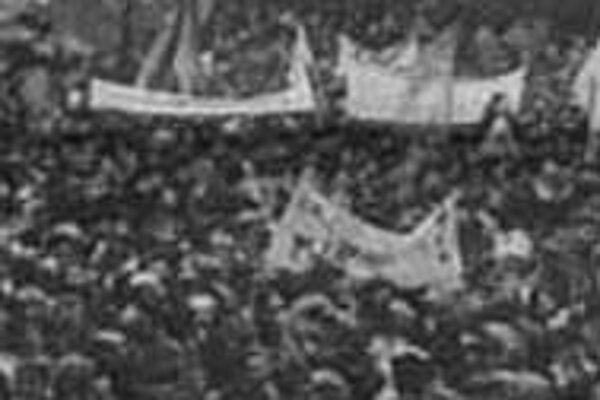 Yes, our beliefs have stood firm
By Augustín Marián Húska

History teaches us that unequal development in human society is corrected in leaps - in emancipatory waves. At the end of 1989 in Malta, representatives of the victorious and defeated superpowers agreed to bring the world's first cold war to an end, not with a public document of capitulation, but in such a way that the defeated would have the right to a "soft" integration into a new system.

It was a decision made by superpowers, and it was a good thing that this "cold" but "soft" decision was made when Slovakia was having to make up for its inadequacies in many respects. From a past without sovereignty, Slovak society inherited four kinds of alienation:

We knowingly took the "soft" solution as a guiding principle for our actions in the last wave of emancipation, which swept through central and eastern Europe when the superpower vacuum was suddenly created after the Malta decision.

The perceptive segment of the population expressed a strong desire to overcome all four forms of alienation, and the backward-looking segment of the population expressed a demoralizing lack of faith that this alienation could be overcome. Slovakia was fortunate that those who were aware of the conditions did not succumb to a barrage of misinformation and, in a well-organized and highly civilized manner, solved their alienation problems.

- Alienation from statehood has been overcome, but certain foreign hegemonic structures are unceasing in their efforts to force upon us the role of a mere obedient executor of power. We will do everything necessary to make sure our partners know that we insist upon being masters of our own destiny to at least the same degree as other small countries in western Europe.

- We are surmounting alienation from the freedom of conscience only gradually. The stigmas of militant atheism and the shallow exclusion of other beliefs still loom large in our social consciousness, but now consumer materialism crowds around us as a universal replacement for ideological materialism. Worship of the Golden Calf is becoming a pervasive substitute.

- Surmounting alienation from the freedom of choice of government is also a long-term process. Slovakia has been dogged by criticism that it favors politicians who, because they do not bend to foreign pressure, have been labelled as representatives of totalitarianism. I consider it fortunate that most of the population does not want a government of weaklings that could not stand up to pressure from abroad.

- We are currently removing alienation from the freedom of ownership as we create a capital-generating class in privatization. It is neither the optimal nor an equal solution to the problem, but a lack of capital and time constraints do not allow a better method.

We are at least trying to make sure that in the privatization of the larger concerns, employees themselves take part in the process and so lay the foundations for a future participation economy. Although we are concentrating on the private sector, we are supporting our activities there with additional public sector sources.

After the collapse of Eastern markets, we were in a difficult situation. In seeking our own solutions to our problems, even when faced with criticism, we are preserving our emancipatory ethic. I believe that under the conditions we have had to work our beliefs have stood firm, and we hope the Slovak people will acknowledge this accordingly.

Augustín Marián Húska was a member of Public Against Violence and a founder of the Movement for a Democratic Slovakia, of which he is now a vice-chairman.

No, totalitarianism has returned
By Ján Budaj

The Slovak democratic revolution is not over; evidence of this fact are the ranks of people who take part in the November (and not just November) meetings and who stand in opposition to the methods of the current powers that be. In fact, we always have "hot autumns" here in Slovakia, in the metaphorical sense.

If we take an honest look at whether the basic demands of the people's November movement have been met, we must unfortunately note that in many ways, totalitarian times have returned.

For instance, we have a secret police again which is uncontrollable and is clearly acting according to the political ends of the Movement for a Democratic Slovakia (HZDS). Once again, having a political point of view is becoming a question of personal bravery, a situation typical in the totalitarian past.

Another large stride into the past is the rape of the public media - radio and television. Both of these most powerful information channels now serve the political interests of Vladimír Mečiar and his allies, in a way similar to when they served the Communist party before November 1989. The result of this state of affairs is the return of propaganda for a single, ruling party - and this threatens the freedom of future elections.

The November demand for equal opportunity has received a knockout blow from the privatization process. "November" criticised the personal favors and abuse of power practiced by the Communists; their present-day successors are sharing amongst themselves more than 200 billion Sk worth of property, everything which belonged to the state. Under the privatization process, they are carving up the armaments industry, the transport industry, our spas and natural mineral water sources. One minister even made an official proposal to privatize the very building that houses his ministry. In November we wanted the withdrawal of the occupying Soviet forces and a new orientation to the West. Today, more and more, we are turning away from the West to the Russian federation, even though the government ostensibly espouses a pro-European line. There is a similar problem in relations with our neighbours. Talk of willingness to improve relations with Hungary does not correspond to the practical policies pursued by the governing coalition of the HZDS, the Slovak National Party (SNS) and the Association of Slovak Workers (ZRS).

The main problem here is the duplicity of Vladimír Mečiar's politics. The policies he carries out are invariably precisely the opposite of the promises he made before the elections, and opposite to the propaganda that he currently releases. In this way, not much has changed since November '89. Then, too, the governing powers talked about democracy. They also talked about cooperation with Europe - even when strategic nuclear missiles were being placed in Bratislava.

Vladimír Mečiar's secret politics, however, lead up a blind alley. In the six years since November '89, people have changed. So has Europe and so has the world. The current attempt to bring back the old way of doing things will end up back where it belongs: In the past. And it will not take long for this to happen.

Ján Budaj was a founder and the first president of the executive committee of Public Against Violence. He is now a vice-chairman of the Democratic Union.