It is September 1938 in Munich, Germany, and the fate of Czechoslovakia is dictated by Adolf Hitler, who takes the Sudetenland for the Nazis and splits the 20-year-old federal republic to the east. Jozef Tiso, a Catholic priest and president of Slovakia, founds the first Slovak nation. The agreement is signed in Munich, where no one of Czech or Slovak origin is present. March 1939, Hungary receives part of southern Slovakia at the Vienna Accord. It is one of the prices of statehood and an alliance with Hitler. Slovakia is saved from the ravages of war and prospers, raising its living standard above that of most of Europe. The nation is a country, but it is not its own. It is a fascist puppet state. 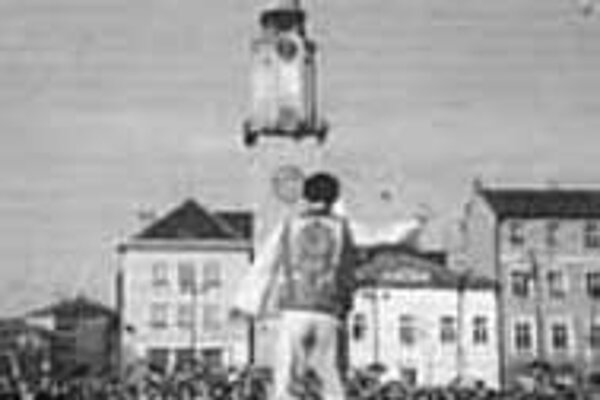 Font size:A-|A+  Comments disabled
It is September 1938 in Munich, Germany, and the fate of Czechoslovakia is dictated by Adolf Hitler, who takes the Sudetenland for the Nazis and splits the 20-year-old federal republic to the east. Jozef Tiso, a Catholic priest and president of Slovakia, founds the first Slovak nation. The agreement is signed in Munich, where no one of Czech or Slovak origin is present. March 1939, Hungary receives part of southern Slovakia at the Vienna Accord.

It is one of the prices of statehood and an alliance with Hitler. Slovakia is saved from the ravages of war and prospers, raising its living standard above that of most of Europe. The nation is a country, but it is not its own. It is a fascist puppet state.

Surrounded by mountains perfect for partisan warfare, Banská Bystrica is the center for resistance. Acts of sabotage and guerrilla warfare start in 1944. In Moscow and London, an uprising is planned to be coordinated with the autumn advance of Allied-Soviet troops. But on August 24, 1944, a German military attaché is captured and killed in Vrútky, near Martin. This signals to Hitler that things are getting out of hand in his puppet state.

Preparations are not ready. Red Army supply lines are stretched. The eastern front has reached the Carpathian mountains on the Slovak-Ukraine border, where German troops have dug in for the advance.

Five SS and two Wehrmacht divisions are sent by Hitler with other German troops to hold Slovakia down. For Slovakia, the time is now. A National Council is set up and the Slovak National Uprising (Slovenské národné povstanie-SNP) is proclaimed over the radio on August 29 in Banská Bystrica.

It is impossible to ignore this history upon arriving in Banská Bystrica. Reminders of the uprising are everywhere: In the main square, on street signs, and in the hills surrounding the town. Walking from the bus station along the Hron river toward the town's center, a large white hamburger-shaped structure focuses into view. A huge lawn lies in front and over a dozen flag poles stand bare as the late-autumn trees.

This is the Slovak National Uprising Museum. To the right of the museum, church towers stand out over trees and the old castle wall. Old anti-aircraft guns point to the hills; tanks litter the grass under the castle walls. Children swing from the turrets of the guns.

The museum houses a collection of over 170,000 uniforms, maps, and other artifacts from both World Wars. The museum has always held a political aspect - it is on its fifth transformation. First, in 1955, it was a theoretical office. Then it became a display case for artifacts and ideology, gaining new interpretations as time turned. The present showing links Slovakia with other anti-fascist resistance movements. Dušan Halaj has collected documents, memories, and materials about SNP and anti-fascist resistance for most of his life. "Just like the landing of Normandy is special for Frenchmen, the Slovak National Uprising is special for us. It reminds us that Slovaks fought for freedom. There is deep feeling."

In April, a new display will show Slovak social and cultural life during the war while asking why, when life was better here than in most of Europe, did Slovaks revolt. The museum plans to make the displays more interactive. "The museum has to compete for entertainment now. This is capitalism; we have to make it attractive for kids," Halaj said.

A flame between the museum's two halves pays respect to the "Unknown Soldier" and those who died in the Uprising. "It's an eternal flame, unless there is a big storm," Halaj quipped.

Leaving the museum, passing a military plane Jozef Stalin gave to Klement Gottwald, Czechoslovakia's first Communist leader, images of past and present collide. Before there were ever the globally-recognized golden arches, slick shops with the latest goods from Japan or the United States, or dapper workers making their way to centers of finance, there were the church towers, fortified walls as a backdrop to a flourishing market, and rugged workers making their way to majestic centers of mining.

The old features can still be seen, a little worn, sometimes a little tired. The clock tower on SNP Square slouches slightly to the right when looked at from the square. The castle wall is jagged now, cropping up unexpectedly at the ends of alleys or behind trees. But Banská Bystrica has ridden the arrow of time from the past into a new time of dramatic transformation.

In preparation for the Uprising's 50th anniversary last year, the city redid SNP Square, which had served as a massive bus stop, renovating the buildings and creating a pedestrian zone that flourishes again. Before 1994, a monument to the town's Soviet liberators demanded eyes' notice.

Now the statue of Panna Mária stands proudly overlooking the square. She had been moved during Communism to the Farský church's backyard. Also on the square are the decorated house of the powerful medieval family Thurzo, and the Benického dom (Venetian House) with its painted scenes of medieval times under an arcade.

"We are proud of our center," said Ľubomíra Slobodová of the Slovak Chamber of Commerce's local bureau. "I think our city is more beautiful than Bratislava."

Beyond the square, an emerald-colored street continues the stretch of shops and cafes. At the street's end, a parking lot and highway overpass lead west. A glowing red K-Mart sign hangs on the old Prior department store. Coca-Cola covers an entire apartment building wall. The McDonald's golden arches greet and say good-bye to visitors. Nostalgia questions this transformation. But this is the present and the city has preserved the past.

The ground is wet next to the Hron River, which sweeps through mountains on all sides. Looking up from anywhere, the surrounding land is higher than the city. A bus headed to 29th of August Street passes. Across the river, a grave stands, an SNP memorial. 1,700 memorials, from tiny to gigantic, lie across Slovakia.

Over 30,000 people died in the two-month-long uprising. The struggle for Slovakia came from Banská Bystrica. The town is the heart of Slovakia. "There is deep feeling...."