What does McDonald's arrival mean to Slovakia?

The very fact that Banská Bystrica is the first city to welcome this world-renowned American company very important to us. It is symbolic that on the 500th anniversary of the founding of the Thurzo-Fugger Copper Association, and on the 740th anniversary of receiving town privileges, McDonald's has been established in our city. Banská Bystrica is a modern city, surrounded by the beautiful scenery of four Slovak mountain chains (Nízke Tatry, Slovenské Rudohorie, Kremnické Vrchy, Veľká Fatra). We have the means to propagate the McDonald's name throughout the Slovak Republic. This is a kind of reward for all the development activities of the city in general. 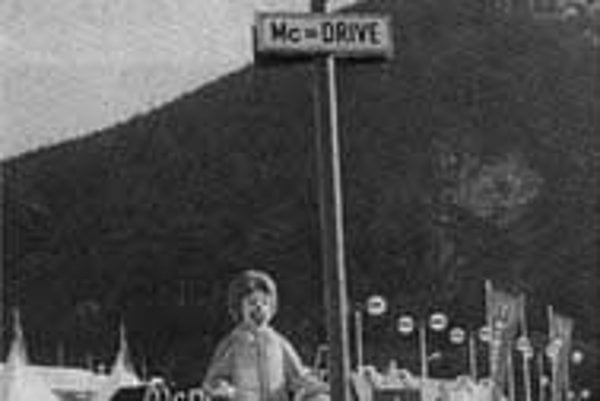 The very fact that Banská Bystrica is the first city to welcome this world-renowned American company very important to us.

It is symbolic that on the 500th anniversary of the founding of the Thurzo-Fugger Copper Association, and on the 740th anniversary of receiving town privileges, McDonald's has been established in our city. Banská Bystrica is a modern city, surrounded by the beautiful scenery of four Slovak mountain chains (Nízke Tatry, Slovenské Rudohorie, Kremnické Vrchy, Veľká Fatra).

We have the means to propagate the McDonald's name throughout the Slovak Republic. This is a kind of reward for all the development activities of the city in general. Another important issue for us is to attract Slovak tourists as well as foreigners. The word "McDonald's" is so popular that many visitors to our city will demand its products. McDonald's was offered a location that connects the new part of the city with its historical center. The creativity that went into building this restaurant is an example of clever architecture, enthusiastic work and good organization.

The opening of the McDonald's restaurant helps get the word out about our city and makes it more visible abroad. Don't forget, 60 new jobs have been created, and in the future, even more workers can be involved by taking care of the surrounding area. The students of the tourism faculty at Matej Bel University, along with students from business academies will have the opportunity to practice their skills. Future residents of university campuses are likely to be McDonald's customers.

We expect that these young people will appreciate the services of McDonald's the most.

McDonald's sponsorship is very significant to sports in our area, especially for our professional hockey team. McDonald's is also involved in the activities of the children's department of Roosevelt Hospital, therefore it is a major player in our health care industry. Similarly, McDonald's helps the environment in Banská Bystrica, which is participating in a European project called "Healthy Cities."

I think that McDonald's, along with other companies, is clear proof that Banská Bystrica has an effective business environment. Future business development in Slovakia and especially in our city is connected with McDonald's. We suppose that McDonald's will support our activities to develop, so we can reach our aim - that is to become the third center in the Slovak Republic.

Imagine this: The sound of a bell is ringing. Children dressed in nice uniforms run out of school and hug their mothers, who stick a little change in their small hands for a snack. The children then head to their favorite restaurant to buy huge hamburgers, big portions of fries and cups of Coke. With their mouths full and a smile, they go out through the door above which the McDonald's logo is shining...

Inhabitants of the Eastern bloc can only watch as McDonald's TV ads present its meals as "gracious food." According to the ads, a human being who doesn't go to McD's is worthless and unimportant. This kind of aggressive advertising that focuses mostly on children is one of the most obvious things McDonald's produces. In the West, Ronald McDonald, the company's mascot, visits kindergartens, and McD's restaurants are presented as happy places where not biting into a Big Mac means being unfulfilled. What effect such advertising will have on the inexperienced Slovak consumer I'd rather not guess.

Besides advertising, McD's products- cheeseburgers, hamburgers and others-are attacking our health. McDonald's people are forgetting something basic - it is the advertising that makes eating unhealthy food like hamburgers, fries or pizza fashionable. Through advertising, they can easily increase consumption (as well as profits) by duping an easily manipulated consumer.

Only with fear in their eyes can Slovak consumers imagine all the antibiotics and growth hormones cattle are fed before they become hamburgers - despite the fact that Ronald McDonald is giving away leaflets made out of 100% recycled paper extolling the nutritional values of McD's food and their ecological approach. But that's a different issue.

Even Slovak farmers can't be happy with McD's. Only a small part of the company's products are produced domestically. Most materials come from around the world: American wheat, ketchup and onions, Dutch cheese and potatoes, lettuce from Spain,and beverage cups from Canada. All these products must be shipped throughout the McDonald's network, which means unnecessary transport and pollution to the environment.

Everything from McD's is for one use only. While the company is trying to implement recycling, and waste from the kitchen is being sorted out, trash from the restaurant is either taken away by the customer or put into trash cans. In Germany, the accumulation of garbage annually adds up to 10,000 to 20,000 tons of waste (approximately the yearly production of solid waste for all of Zvolen). And only after many long years of protests did McDonald's start to use 75% recycled paper.

McDonald's spends a huge amount of advertising money to create the impression that the company is "careful and green," and that its restaurants are fun places to eat. This strategy certainly proves the saying that if you repeat a lie 100 times, it will become truth. Children are attracted - along with their parents - by the promise of "free" toys. But behind Ronald McDonald's smile is the fact that McDonald's focuses on making money and that's all that it cares about.