Kováč Jr. released on bail; waits for his fate

Twenty pounds skinnier and "a little tired," Michal Kováč Jr., son of the Slovak president, was released from Vienna's prison where he had been held in custody for six weeks. An Austrian citizen, whose identity has not been made public, had deposited a million Austrian shillings so that Kováč Jr. could wait for his trial outside prison. Austrian police detained Kováč Jr. Thursday afternoon, August 31, in Hainburg, just across the Slovak border, after they received an anonymous call announcing there was a person sought by Interpol sleeping in a Mercedes parked in front of the police station. 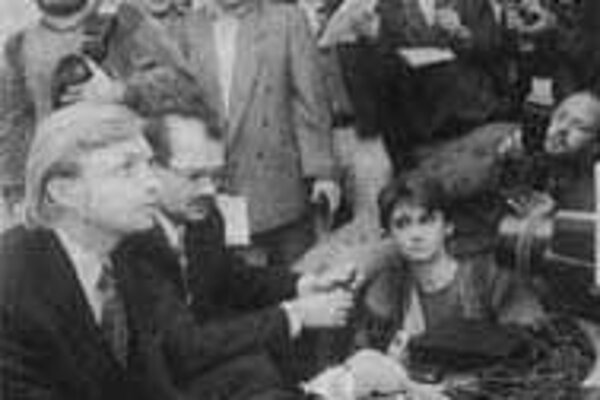 Michal Kovač Jr., on why accusations were made against him to the Germans

Twenty pounds skinnier and "a little tired," Michal Kováč Jr., son of the Slovak president, was released from Vienna's prison where he had been held in custody for six weeks.

An Austrian citizen, whose identity has not been made public, had deposited a million Austrian shillings so that Kováč Jr. could wait for his trial outside prison. Austrian police detained Kováč Jr. Thursday afternoon, August 31, in Hainburg, just across the Slovak border, after they received an anonymous call announcing there was a person sought by Interpol sleeping in a Mercedes parked in front of the police station.

Detention was smooth - Kováč Jr. was drunk and asleep. Earlier in the day, he had been kidnapped when leaving home for work. His abductors gave him some electric shocks and poured two bottles of whiskey down his throat in order to pacify him. Apparently, they drove him through the border and left him in Hainburg.

The Slovak police have yet to officially determine who the kidnappers were and what was their motive. Surrounded by journalists in the Astron Suite Hotel in Vienna, Kováč Jr. hinted, but did not say directly, that the kidnappers worked for his father's political rivals.

"To claim that it was revenge by my business competitors would be misleading," he told the press. According to a spokesman for the Slovak president, the kidnapping happened "only to discredit the president." The kidnapping made one fact public knowledge - that there had been an international arrest warrant for Kováč Jr. issued by German authorities in November 1994.

Kováč Jr. is suspected of being involved in a financial fraud worth $2,000,000. German investigators planned to interrogate Kováč Jr. in Slovakia later in September. The idea was abandoned after the mysterious kidnapping. At present, Kováč Jr., - who, according to Radio Twist, found temporary shelter in a Salesian monastery near Vienna - awaits the Austrian authorities' decision on how to respond to Germany's request for his extradition.

In case if Austria decides not to hand him over to Germany - where he would be in custody again - Kováč Jr. plans not to move to Slovakia before the investigation is over.

"I want the whole case to be solved here - in Austria," Kováč Jr. told Slovak journalists after he was released. Kováč Jr.'s attorney told the press his client "has enough evidence to convince the German justice system that he is not guilty."

German investigators learned about Kováč Jr. from Peter Krylov, who had been convicted for another crime in 1992. According to a Munich prosecutor, Krylov's allegations were serious enough to issue an arrest warrant.

Krylov is a Slovak who defected to Germany during Communism and worked as a reporter for Radio Free Europe in Munich. After the collapse of Communism, he started a small import-export business. He was later convicted of illegal practices.

In an interview with the Slovak daily Sme, Kováč Jr. said he saw only two possible explanations why Krylov would have accused him - he "either tried to hide his guilt by using my name, hoping the case would just fade away because I am the son of a prominent citizen, or he was forced to do so." Kováč Jr. did not specify who could have forced Krylov to tell the German police of his alleged involvement in the fraud. However, Kováč Jr. suggested the kidnapping is related to the feud between Kováč Sr., the Slovak president, and Vladimír Mečiar, the Slovak prime minister.

The country's top two politicians were once close allies. Back in 1993, Mečiar himself appointed Kováč as a presidential candidate. (The 150-member parliament approves the president by a three-fifths majority.) But Kováč failed to meet Mečiar's expectations, vetoing some bills Mečiar's coalition tried to enact. He also refused to approve some of Mečiar's ministerial candidates.

Among those Kováč rejected was Ivan Lexa, whom Mečiar tried to appoint as minister of privatisation late in 1993. Kováč told parliament in March 1994 that Mečiar urged him to approve Lexa because his Movement for a Democratic Slovakia (HZDS) was running out of money and Lexa was the only person who could arrange the money as the privatisation minister. After that speech, Mečiar was voted out of office. Since that time, he has been trying to discredit Kováč and remove him from office.

Kováč Jr. now says that the first allegations of his dirty business practices surfaced in 1993, after the president refused to approve Lexa as minister of privatisation.

Lexa was named director of the Slovak Information Service (SIS) earlier this year - a move that enraged the opposition.

Jaroslav Šimunič, the first police officer in charge of investigating the kidnapping told the press he believed some SIS employees and Lexa played a key role in the crime. Less than a week later, Šimunič was called off the case.

Peter Vačok, Šimunič's successor, repeatedly came to the conclusion that there was a need to interrogate some SIS employees. Trying to get Lexa to authorize his subordinates to speak, Vačok hit a stumbling block. Not only did Lexa refuse, he asked the prosecutor general to press charges against the investigators on the basis of "organized crime."