LIKE A DOWNBOUND train, a public procurement scandal has plunged Prime Minister Mikuláš Dzurinda's ruling SDKÚ party into deep political trouble three months before national elections.
While many facts in the case remain unclear, the scandal surrounds a tender commission at the Železničná spoločnosť (ŽSSK) state railways firm that was led by the prime minister's brother Miroslav, a section chief at the company.
The commission, formed in 2000 to select a supplier for 35 new light motorised locomotives, last year chose a bid by the Swiss Stadler AG Bussnang and the Slovak ŽOS Vrútky that was over Sk820 million more expensive than a competing offer, according to the Supreme Audit Office state watchdog. 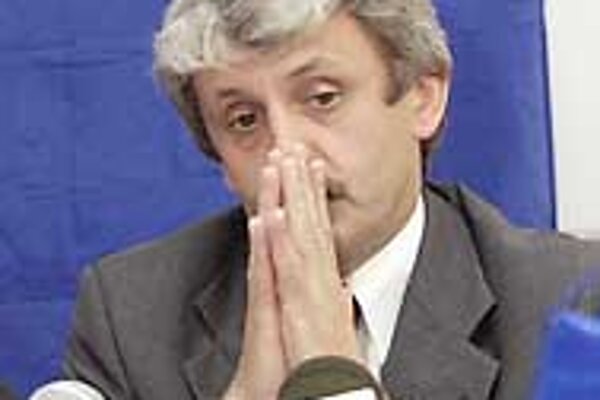 While many facts in the case remain unclear, the scandal surrounds a tender commission at the Železničná spoločnosť (ŽSSK) state railways firm that was led by the prime minister's brother Miroslav, a section chief at the company.

The commission, formed in 2000 to select a supplier for 35 new light motorised locomotives, last year chose a bid by the Swiss Stadler AG Bussnang and the Slovak ŽOS Vrútky that was over Sk820 million more expensive than a competing offer, according to the Supreme Audit Office state watchdog.

The office expressed concern about the transparency of the tender, as well as its selection criteria, to the Transport Ministry on June 10 in a secret memorandum that was leaked to the press.

The impact of the charges was dramatically increased by a letter, again leaked to the press, in which a member of Dzurinda's SDKÚ party seemed to suggest the party would profit from the tender.

Raising the political temperature yet another notch, Audit Office head Jozef Stahl said on June 18 that he had been the object of a blackmail attempt to force him to withdraw his criticism of the tender.

"It's not very pretty," said political analyst Grigorij Mesežnikov, head of the Institute for Public Affairs think tank. "It's tough to say how much the affair will hurt the SDKÚ at the moment, but they will certainly have to spend significant energy limiting the impact."

With voters due to visit ballot boxes from September 20-21 in an election expected to determine Slovakia's entry into Nato and the EU, the fortunes of Dzurinda's party were near their all-time low of about eight per cent even before the scandal broke last week.

While seen abroad as a democratic, stabilising and Western-oriented political force, the SDKÚ is blamed at home for the pain of economic reforms, and for its perceived softness on corruption, an issue of major concern to Slovak voters.

Dzurinda reacted quickly to the new corruption charges, delivering a request to President Rudolf Schuster on June 16 that Transport Minister Jozef Macejko be fired. The PM claimed Macejko was "politically responsible" for "a certain group of people" who, the PM claimed, had "promoted their personal interests, complicated the tender and prevented its earlier completion".

Dzurinda also said "there are plenty of reasons to suspect that the conclusions of the NKÚ's investigation were incorrect."

However, Macejko claimed he was innocent, and had not tried to influence the tender in favour of the loser, the French Alstrom firm in consortium with the domestic ŽOS Zvolen company.

President Schuster, meanwhile, said he was in no hurry to sign Macejko's dismissal, pleading a busy schedule and arguing that he ought to listen to all sides before coming to a decision.

Lurid details aside, the tender selection process will stay confidential until a contract is signed with the winner. It thus remains unclear whether the commission actually selected a more expensive bid or, as material leaked to the press indicates, the operating costs of the trains in the losing bid far outweighed those of Stadler's engines, making the winning offer in fact the less expensive by about Sk800 million.

The meaning of the now-infamous letter written by MP Peter Kresánek to Dzurinda also remains in doubt.

Kresánek, writing of the tender last week, told Dzurinda of "the problematic nature of this business, of the supplier and the supplier's products, which could compromise us for another four years." He invited the PM to note "the huge differences in the purchase price" between the Stadler and Alstrom bids.

The MP then appeared to refer to SDKÚ treasurer Gabriel Palacka, who was fired from the Transport Ministry post over corruption allegations in 1999 (see chart, at right).

"Maybe I should have communicated more with Gabo (I've spoken with you twice already), but I thought that one talks about these things as little as possible, and the entire time I was operating on the assumption that Gabo sees both alternatives as possible, given that the background for the party is the same."

Asked whether he thought that by "background" Kresánek had meant money siphoned from the tender to the SDKÚ, the party's general secretary and Interior Minister Ivan Šimko said "I don't know what else he could have meant." Šimko later said that Kresánek had been referring to the political background of the tender.

Dzurinda's political foes were less kind, seizing on the scandal to compete for the SDKÚ's relatively similar voter support base.

Robert Fico, head of the non-parliamentary Smer party, said he would not be part of any future government that contained Dzurinda and Deputy PM Ivan Mikloš, because of what he claimed was their corruption and failure to launch reforms.

"Without a scruple [the Kresánek letter] describes the mechanism of clientelism and the influence of political parties on disadvantageous financial decisions for the state," he said of the tender.

Fico's position was approved by all 20 members of the party's senior governing body, making Smer the second party after Pavol Rusko's Ano to reject the current PM following the scandal.

Agriculture Minister Pavol Koncoš, head of the ruling coalition SDĽ party, said Dzurinda should weigh resigning, while the opposition HZDS party said it was preparing a non-confidence motion in parliament to bring the PM down.

Mesežnikov said that while the motion was not likely to succeed, Dzurinda for his own good had to come up with a convincing explanation of the facts. "We need reliable information, and we need it soon. If Dzurinda is able to provide it, then he has a chance," said the analyst.

Parliament on June 18 voted to have Stahl appear before the legislature and present his findings. The motion was supported by 76 of the 126 members present in the 150-seat chamber, and, in an ominous signal for the prime minister, by deputies for three of the five ruling coalition parties, as well as two from the SDKÚ.