Privatisation one of most positive areas of cabinet's record

The Dzurinda government, when taking office in October 1998, defined continuing with privatisation as one of its priorities. As conditions for reaching this goal it included transparency, observance of the rules of business competition, and creation of the related legislative environment.
In line with these standards the government also set itself the goal of reviewing the legality of privatisation to date. It intended as well to continue privatising through means of public contests under public control, with the possibility of re-evaluating past privatisation decisions by courts in such a way that privatisation would create the preconditions for real restructuring and the healing of privatised companies. 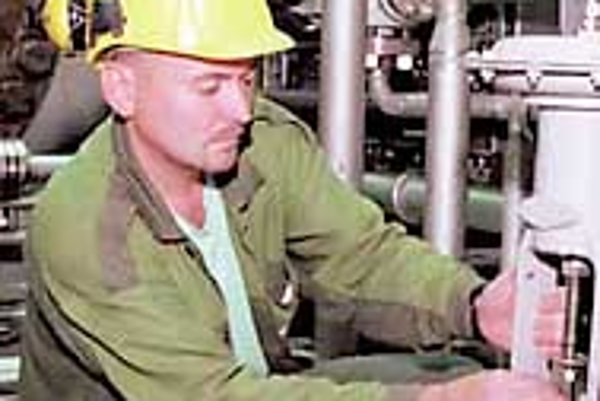 Font size:A-|A+0
The Dzurinda government, when taking office in October 1998, defined continuing with privatisation as one of its priorities. As conditions for reaching this goal it included transparency, observance of the rules of business competition, and creation of the related legislative environment.

In line with these standards the government also set itself the goal of reviewing the legality of privatisation to date. It intended as well to continue privatising through means of public contests under public control, with the possibility of re-evaluating past privatisation decisions by courts in such a way that privatisation would create the preconditions for real restructuring and the healing of privatised companies.

The job of evaluating the legality of past privatisation decisions was given to the Fond národného majetku (FNM) privatisation agency. The FNM looked at sale-purchase contracts signed between the FNM and new owners of privatised property from November 5, 1994 to November 10, 1998, the effective time in power of the third Vladimír Mečiar government.

Of the 906 contracts examined, deviations were discovered in 186, which were then passed on for judgement by a broad commission made up of representatives of the FNM, the Ministry for Privatisation and Administration of National Property, the Justice Ministry and commercial law offices.

The commission concluded that 47 contracts of the 186 studied could be considered absolutely invalid. Given the possible legal risks involved the FNM decided to act only in clear cases where the Fund stood a chance of victory in any possible court battle. In general it can be said that the re-examination of privatisation decisions did not live up to previous expectations.

The FNM did not begin effectively requiring new owners of property to fulfil contractual obligations until July 1999 (until then it was prevented from doing so by legislation). Legislative changes allowed the fund to withdraw from some contracts on the grounds that the privatisers had not met contractual obligations. The FNM in this way regained stakes in a number of important companies, including steel maker VSŽ, chemicals firm Istrochem, jewelry company Klenoty, shoes maker Obuv, and the Kúpele Sliač a Kováčová spa. In some cases shares were returned to the FNM's account on the basis of out-of-court settlements, such as in the Piešťany spa case, the Nafta Gbely gas storage company, and the Novácke chemické závody chemicals maker.

FNM 'privatisation bonds' that had been issued in 1996 by the Mečiar government were paid off to all holders in the course of 2001. In 1999 and 2000 the Dzurinda government had considered the possibility of paying back the bonds in the form of shares in lucrative joint stock companies where the state held stakes, but in the end this option was rejected (the government gave preference to sales of shares to strategic investors).

Trading in FNM bonds was made possible in November 1999, and after further liberalisation in May 2000 trading in these bonds on the secondary market jumped sharply.

In 1999 an analysis of the privatisation process from 1991 to 1998 was carried out, with an emphasis on evaluating the level of transparency observed, the extent to which the public interest was protected, the money generated and the impact on the business sector. In all areas, seriously negative elements were discovered.

In order to protect the observance of the law as well as transparency in individual privatisation steps, committees and advisory bodies were set up at the Privatisation Ministry. The manner in which these organs worked, along with the decision process as such, were governed by a document called The Proposed Basis for the Submission of Suggestions for the Issuance of Decisions Concerning the Privatisation of the Property of State Companies and Organisations by Direct Sale, which had been approved by the Dzurinda government.

The government specified relations between all the institutional elements of the privatisation process, including the Privatisation Ministry, the FNM and various ministries. It also committed to creating a public register of privatised property, which was in fact published on the Internet in 1999, but which contains only data on the first acquirers of property, and is arranged according to the original titles of the former state institutions. It is steadily being updated, however.

In 1999, to cover the further privatisation process, a document called A Concept for the Privatisation of State Property for the Coming Period was drawn up and approved. In January 2001 the government also approved a schedule for accelerated privatisations. The government enacted privatisations through international tenders with the help of privatisation advisors, principally in the cases of the privatisation of 'strategic' companies (those considered strategically important to the economy, such as utilities) and banks. In some cases, however, suspicions arose of the influence of various lobby and clientelist groups on the results of tenders (including the return of bids for the offers to be raised in the privatisation of the Slovenská sporiteľňa (SLSP) bank, the country's biggest; not publishing the prices offered in the sale of a 49 per cent stake in massive gas utility Slovenské plynárenské priemysel (SPP); the repeat of the tender in the privatisation of shipping company Slovenská plavba a prístavy (SpaP); the purchase of VSŽ shares by the Transpetrol oil pipeline operator; and the sale of a stake in the RIF restitution fund). In each case, however, the suspicions were never proven.

The influence of the Supreme Audit Office independent state watchdog, along with state prosecutor bodies, was reflected in legislative changes passed in 2001. These bodies, however, have so far never conducted an audit of the privatisation process.

Transparency in privatisation has improved compared to the period under the previous government largely due to the release of more information. This has not proven sufficient to ensure public control, however.

Privatisation of 'strategic' companies and banks

In the interest of completing the privatisation of state companies and organisations under economic ministries, including the FNM's ownership stakes in joint stock companies, the Dzurinda government in 1999 re-evaluated and newly defined the state's strategic interest and participation in the energy, telecom, engineering, transport and other sectors, with the goal of making the state's exercise of its powers and responsibilities as effective as possible (a 1991 law had identified companies which had the nature of natural monopolies and defined those which could not be privatised. An amendment to the law required the state to keep a 51-percent share in selected companies which had the nature of natural monopolies).

The government then managed to finish the privatisation of SPP, three energy distribution companies, and Slovak Telecom. The Slovenské elektrárne energy utility remains to be privatised.

The Dzurinda government also created conditions for the privatisation of banks. The Slovak bank sector was privatised in the shortest time recorded in any of the transforming countries. The fact that the largest Slovak banks now have real owners who are expected to make them function more efficiently, as well as the fact that bank managements now follow true business aims and not those of political and economic lobby groups, are immeasurably positive benefits of the entire process. All privatised banks now have renowned foreign investors.

The privatisation of the bank sector, due to the unavoidable restructuring of these banks and the cutting out of bad loans before their offer for sale, cost taxpayers Sk105 billion ($2.2 billion).

A transformation concept in the health care sector required that those acquiring property prove that they had health care expertise, as a way of guaranteeing that health care facilities would be sold to bodies that would offer health care services. The approach to privatisation in this sector cannot be evaluated positively, however. The legal form of the privatised objects was not clarified, and in many cases we saw wide variations in the prices of facilities sold.

The privatisation of the 17 companies in the Slovenská autobusová Doprava state bus transport umbrella is continuing, and should be finished by the end of the Dzurinda government's election term. In the summer months the FNM should also transform the companies of the Vodárne a kanalizácie (VaK) water and sewage utility into joint stock companies. The Fund will then deposit the assets of these companies into municipal water companies whose shares will be owned and administered by towns and municipalities.

Among the more important stakes that the FNM regained two years ago after abandoning sale contracts are those in chemicals maker Istrochem Bratislava and aluminium smelter ZSNP Žiar nad Hronom, where international tenders are being prepared.

The privatisation process, particularly that in the second half of the Dzurinda government's term, can be evaluated positively. The restructuring and sale of the bank sector was finished, while legislative conditions were created for the privatisation of strategic companies and natural monopolies. The sale of SPP for $2.7 billion was the most important privatisation decision of this cabinet.

A promise of the previous government to pay Sk33 billion in FNM bonds was fulfilled. Both the Privatisation Ministry and the FNM used transparent privatisation methods through public competitions and international tenders with privatisation advisors. We can easily call 2001 and 2002 'the years of privatisation', given the amount of the funds raised. The income generated from privatisation during the Dzurinda government's term should reach about Sk300 billion.

This analysis was written by Oľga Reptová, a privatisation analyst with the Mesa 10 think tank in Bratislava. It appears as part of a project by the Institute for Public Affairs independent think tank, named Evaluation of the Mikuláš Dzurinda Government's Fulfilment of its Programme Statement, excerpts from which will be published every two weeks in The Slovak Spectator. (c) Inštitút pre verejné otázky, translation by Tom Nicholson, The Slovak Spectator.