MILAN Hodža, a Slovak statesman from the early 20th century whom many rank among the fathers of the European Union, is finally coming home. In a ceremony that will see his remains buried in his homeland this week, Slovak and international figures will remember Hodža as a European Union visionary and a passionate opponent of nationalism.
While relatively unknown to many modern Slovaks, politicians and state officials around the world consider Hodža (1878-1944) as the most significant Slovak personality of his time. Having held the highest state functions in his own country, Hodža later won enormous international credit for his vision of a post-war European alignment - today known as the European Union. 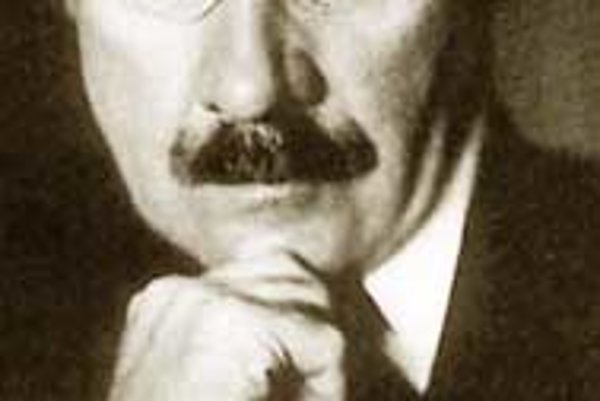 Font size:A-|A+  Comments disabled
MILAN Hodža, a Slovak statesman from the early 20th century whom many rank among the fathers of the European Union, is finally coming home. In a ceremony that will see his remains buried in his homeland this week, Slovak and international figures will remember Hodža as a European Union visionary and a passionate opponent of nationalism.

While relatively unknown to many modern Slovaks, politicians and state officials around the world consider Hodža (1878-1944) as the most significant Slovak personality of his time. Having held the highest state functions in his own country, Hodža later won enormous international credit for his vision of a post-war European alignment - today known as the European Union.

"He was the most renowned Slovak politician in the European context. He saw the future of small European nations grouped in a European federation, in an integration assuring them mutual prosperity," said Pavol Lukáč, a historian with the Slovak Foreign Policy Association.

"His activities were always of a European character, and were never restricted to purely national issues. He strongly supported the idea of an integrated central Europe, and in predicting Stalin's dangerous imperialistic plans to establish a communist regime in central Europe he won over Roosevelt and other American politicians who believed in him," the historian added.

The first Slovak prime minister of interwar Czechoslovakia (1935-1938), and at the same time that country's last, Hodža abdicated from the post after disagreeing with Czechoslovakia's partitioning in the Munich Agreement in September 1938.

"Hodža was very tied to the idea of Czechoslovakia. During his entire life he criticised nationalism and fascism, so he could not support or agree with what was happening," said Lukáč, explaining that Hodža had had no desire to participate in the political life of 1939-1945 Slovakia, a puppet state of Nazi Germany.

After leaving the country he lived in Switzerland, France, Britain and America, where he died in 1944. His last wish was to be buried in his homeland. However, complications that arose during Eduard Beneš wartime presidency (Beneš and Hodža were political rivals), and then the communist regime's seizure of power by a coup in 1948, meant that Hodža's request remained unfulfilled.

But now, on the initiative of the current Slovak government and 13 years after the communist regime was overthrown, Hodža's remains will finally be transported to Slovakia and buried beside those of his wife in a ceremony on June 27 in the Slovak National Cemetery in northern Slovak's Martin. Every Slovak prime minister since the fall of communism in 1989 will be present at the event, along with President Rudolf Schuster and foreign ambassadors to Slovakia.

"It's an act of historical justice, a display of honour towards one of the greatest sons of the Slovak nation, as well as an opportunity to repeat his message to a wider public," said Prime Minister Mikuláš Dzurinda, the initiator of the event, for The Slovak Spectator.

A reception in honour of Hodža's legacy is also scheduled to be held on June 23 in the Garfield Park Conservatory in Chicago in the presence of Slovak Culture Minister Milan Kňažko and Slovakia's Ambassador to the United States Martin Bútora.

Apart from being a politician, Hodža was also a journalist, writer and professor of history. Fluent in seven languages, he became politically active during the Hungarian monarchy as a member of the Hungarian parliament at the age of 27. As a journalist he fought for the rights of the Slovak nation, for which he faced several criminal prosecutions by Hungarian officials.

His political career culminated during the Czecho-Slovak Republic (founded in 1918), later Czechoslovakia, when he was appointed to several of the country's ministerial posts at the same time before finally heading the government. Hodža understood that in order to win strong support from the Slovak side of the federation he had to offer Slovaks an economic programme that could relieve their poverty.

"Hodža was an activist and a realist," said Dzurinda. "In contrast to politicians who saw the Slovak nation's future lying with Russia and the reciprocity of Slavic nations, Hodža focused on more concrete and realistic projects increasing education and the standard of living in Slovakia. He based his politics on the strongest element of Slovak society at the time - farmers."

Despite the growing force of nationalism in Czechoslovakia, Hodža insisted that the future of small nations such as Slovakia lay in a European federation. He co-operated with many European politicians, presenting to them his vision of an integrated central Europe which he later broadened to encompass most of the continent. The founder of the Pan-European movement at the time, Hungarian Count Coudenhove Kalegi, in his memoirs writes of Hodža as one of the three interwar state officials who contributed the most to the dream of a future European Union.

Given his beliefs, Hodža saw no option other than leaving his homeland on observing President Beneš's renewal of Czechoslovakia, after the Munich trauma, in connection with a powerful state - this time the Soviet Union.

"Hodža criticised this Beneš illusion from the very beginning, saying that after the Munich experience we could not rely just on manipulative powerful states. He said we had to ensure our security by ourselves. That's why he advised the smaller nations of central Europe to join a union that would be able to withstand any pressure from outside, economically as well as militarily and politically," said Lukáč.

Lukáč remembers a speech by Hungarian Pan-European historian Lázslo Szarka, who said that "if Hodža were alive today, he would surely be the chairman of the European Commission".

Leaving first to Switzerland, Hodža remained active in politics and acted as a patron of Slovak interests abroad. During his stay in Britain he wrote a book called Federation in Central Europe, in which he explained the need for greater co-operation between central European countries. Many consider the work, which was published in 1942, as Hodža's masterpiece and the essence of all he stood for.

"We can see the reflection of many of his thoughts in the process of European integration which started after the war," said Dzurinda. "However, due to the 40 years of communist dictatorship, central Europe came to understand these ideas and the man behind them only after the fall of the Iron Curtain."