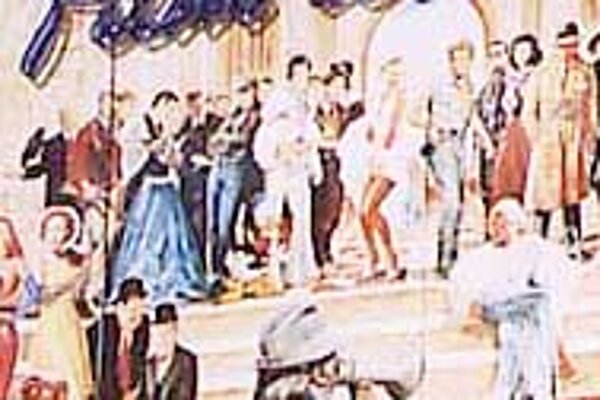 AS I STUDIED the menu at Film Restaurant, noting with curled toes the Brad Pitt fettucine and the Donald Duck breast of duck, I wondered at what point things like theme restaurants become parodies of themselves. Whether there is a limit to the irony, or whether any was in fact intended in the first place. Whether there is a wink at the bottom of the Robert De Niro spaghetti and meatballs, or just the bland stare of white crockery.

Before I warm to my topic, let me say I enjoyed the food and service at Film Restaurant, and I'm pretty sure most diners will as well. The dishes are varied, well-prepared and served promptly, and the environment is pleasant. The waiters are old enough to care about being good at their jobs.

But I'm going to go way out on a (fairly sturdy) limb here and suggest that the 'creators' of Film Restaurant did not trouble themselves to be more than cute and obvious in designing the menu. The Prasiatko Babe (Babe the Pig) meal is pork; the Zachráňte Willyho (Save Willy) is grilled salmon, flounder and catfish; the Count Dracula soup is tomato (get it?).

I would even suggest that some of the menu items might have been renamed if the designers had known more about the lore on which the film titles rest. Someone behind the restaurant obviously has a thing for vampires, but the Nosferatu pizza bread will not tempt customers who know that Nosferatu comes from the Old Slavonic nosufur-atu, meaning 'plague carrier' (in the middle ages vampires were believed to carry diseases such as tuberculosis). Even if the menu writers were working with the title of the 1922 silent film Nosferatu, directed by Friedrich Murnau, they might have thought better of thus naming a restaurant dish, given that the film subtitle was "A Symphony of Horror".

Thinking that the vampire theme must point to some special forté in Film Restaurant's repertoire I ordered the Transylvánia bruschetta starter. I believe it would have been more appropriately named the Uncle Ben's bruschetta, given the suspicious familiarity of the cold tomato sauce on the toast, but Film Restaurant's premise is that food is better described by a movie name than its ingredients.

But it's still a dicey business proposition in the hands of people who may not know the contents of films they invoke to sell their food. The Mlčanie Jahniat (Silence of the Lambs) lamb steak may not entice people who saw Anthony Hopkins slavering over the memory of a dish of human liver, nor will the Hanibal veal and chicken draw those who watched Hopkins spoon out Ray Liotta's brains in the film.

The only thing that really made me smile was the Donnie Brasco 'cocteil'. Little in the film suggested why it had been chosen to honour the drink, although after ordering it (rum, curacao and orange) I was reminded of Al Pacino telling Johnny Depp he had "cancer of da prick". The drink may have been how he got it.

If the theme concept at Film Restaurant is a Comedy of Errors, it's because the designers didn't invest in making it original or (intentionally) amusing. How about a Dolly Parton breast of chicken? A Bad Lieutenant extra-strong cocktail, for on-duty policemen? If you really want to put people off, what about a Shallow Grave steak? An American Pie beer?

It's a pity, because the restaurant, housed in the old Pekná Brána eatery, has the tradition and the wait staff to offer a fine, low-key dining experience. The walls are painted a muted russet, a high window is flung open above the beams in the main room, and an ancient pivnica (beer cellar) awaits guests down the stairs.

But over it all someone's half-baked vision obscures the true quality of Film Restaurant. Chaplin and Brando line the walls and mat the tables; 1950s rock and roll represents the timbre of the Happy Days soundtrack. It's not just that we've all heard the songs a hundred times - it's that you know the owners have no idea what rock and roll was in American slang in the first place, and whether Al Pacino could have caught cancer from doing it.