Campaign 2002: Bare bums and the blues

IT'S GETTING DIFFICULT to avoid the hundreds of political billboard advertisements that have flooded the country's roads and city suburbs in the run-up to September's general elections. It's even tougher to find an ad that says anything about election issues or political platforms.
Massive banners featuring naked bums, Disney characters and masked men may have kept Slovaks amused this summer, ahead of a vote that is expected to decide whether the country is invited to join Nato and the European Union this year. But what they haven't done, say political analysts, is to help the electorate make voting-day choices, or even encourage them to turn out. 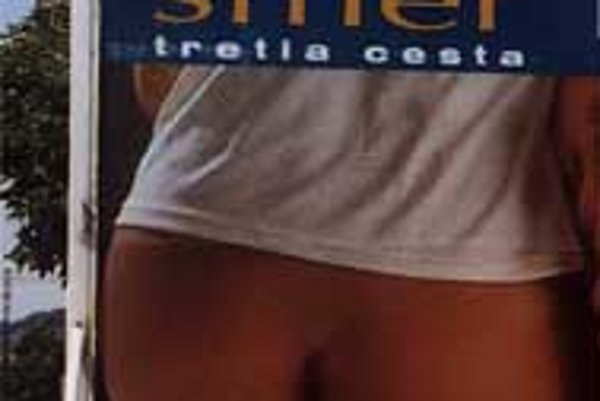 Font size:A-|A+  Comments disabled
IT'S GETTING DIFFICULT to avoid the hundreds of political billboard advertisements that have flooded the country's roads and city suburbs in the run-up to September's general elections. It's even tougher to find an ad that says anything about election issues or political platforms.

Massive banners featuring naked bums, Disney characters and masked men may have kept Slovaks amused this summer, ahead of a vote that is expected to decide whether the country is invited to join Nato and the European Union this year. But what they haven't done, say political analysts, is to help the electorate make voting-day choices, or even encourage them to turn out.

"The majority of the posters lack deeper ideas or information for the voter, and are mainly aimed at provoking a quick reaction, sometimes controversy" said Darina Malová, a political science professor with Bratislava's Comenius University.

With 10 weeks left until the September 20-21 elections, political parties have engaged special teams and advertising companies to woo the electorate to their sides. Although it is unclear how many of the posters have gone up around Slovakia, as parties are being cagey with the information, The Slovak Spectator counted 79 billboards on a 250-kilometre bus journey from central Slovakia's Brezno to Bratislava, or one every three kilometres.

The raciest ads promote the non-parliamentary Smer party led by maverick Robert Fico. Carrying the message that Slovakia should enter the EU proudly rather than meekly, the billboards state: "To the European Union! But not with bare bums," drawing on a Slovak metaphor for physical and spiritual poverty. The poster shows a group of people, apparently a family, sitting on a bench dressed in T-shirts but no bottoms.

These ads continue a Smer series which has portrayed Fico as a more reliable defender of Slovak interests than Mečiar or Dzurinda, and seem to have got under the skin of the nation's current leader.

"They will steal under Robert Fico as well," Dzurinda said recently at a press conference. "The important question is whether they will steal less, just as less is being stolen under me compared to Mr. Mečiar."

Dzurinda also called Fico an "increasingly primitive and vulgar populist" at the July 7 press conference, although he said his Christian Democratic and Christian Union (SDKÚ) party was not ruling out post-election co-operation with Smer.

The ruling SDKÚ has itself chosen the colour blue as the party's main motif. A series of posters saying, mysteriously, that "blue is good" are stationed close to other blue ads which show the SDKÚ's top election candidates.

Older SDKÚ posters show Dzurinda, Foreign Minister Eduard Kukan, party deputy chair Zuzana Martináková, and Deputy PM for Economy Ivan Mikloš under the caption "It's only a small step to the EU and Nato. You'll make it with us," a reference to the foreign policy successes the party has claimed.

For every serious campaign ad, however, there seem to be two mockeries or anonymous posters.

One such mockery has cast figures from famous Disney cartoons instead of SDKÚ officials, such as Mickey Mouse instead of Dzurinda and Fred Flintstone instead of Kukan. The poster says: "It's only a small step to Disneyland," and is signed with the spurious party abbreviation ÚKDS.

Entrepreneur Siloš Pohanka, remembered from an apparent attempt in 1998 to take the private TV Markíza from its then general director Pavol Rusko, now head of his own New Citizen's Alliance party (Ano), admitted to having authored the posters. He explained that he had wanted to "express my discontent with the performance of the cabinet".

Vladimír Talian, from the civic get-out-the-vote initiative We Are Not Indifferent, said such ads could disgust particularly younger, more idealistic voters with their cynicism, and eventually lower turnout in the elections.

Noting that the opposition HZDS party, which has been cited by the EU and Nato as a barrier to Slovak integration, tended to score better in elections with lower turnout, Talian said "we know which parties are comfortable with low turnout and who would most profit from [erecting such posters]."

However, Peter Baco, election leader of the Movement for a Democratic Slovakia (HZDS) party, denied that the HZDS had ordered the billboards, while Pohanka said "this time we don't have our fingers in it."

The Slovak Spectator asked the nation's six major political parties how much money they had invested into billboards and other printed advertising, but only the small Slovak National Party (SNS) replied by deadline.

SNS spokesman Miroslav Strelec said his party had placed 150 billboards around the country and printed two million leaflets and brochures. He estimated the SNS had spent around Sk5 million for the printed materials. Parties are allowed to spend a maximum of Sk12 million ($270,000) on their campaigns.

Despite the millions that have been invested into the posters and leaflets, a survey released May 19 by the Polis agency indicated that voters do not base their decisions on billboard presentations. Only 9.5 per cent of respondents said they definitely looked at posters in making their final choice.

Such was also the opinion of a passenger on the Brezno-Bratislava bus. Ján Rusnák, 56, a factory worker from Banská Bystrica, said that for him election posters served as a source of amusement rather than voter information.

"Some of the posters are good for a laugh, but I don't really pay much attention to them in general. Sometimes it's interesting to watch how parties ridicule each other in the posters, but they don't tell me why should I vote for them," Rusnák said.

Malová agreed. "If a foreigner came to Slovakia for the first time and knew nothing about politics here, he'd have no idea whether Fico's Smer is left or right wing from their posters. Basic party identification is lacking in other parties' posters as well," she said.

"All those naked bottoms and doors to the EU just represent ideas generated to draw attention."

Smer's Monika Beňová, however, maintained that controversy was part of an effective campaign.

"A campaign that nobody notices would be a waste of the money."