HOW LONG does it take to plan, register and launch a new political party? In Slovakia, with fall elections only two months away, the answer is a little over a week in the case of opposition rebel Ivan Gašparovič and his Movement for Democracy (HZD) party.
Ten days was all Gašparovič and his HZD needed to get themselves registered at the Interior Ministry, hold a founding congress, nominate almost 50 candidates to contest the September ballot, pass and print a 20-page booklet of party statutes and a five-page platform - and collect 30,000 signatures on a petition allowing them to enter the elections.
The results were presented, 12 hours before a pre-election deadline, at a press conference July 17. 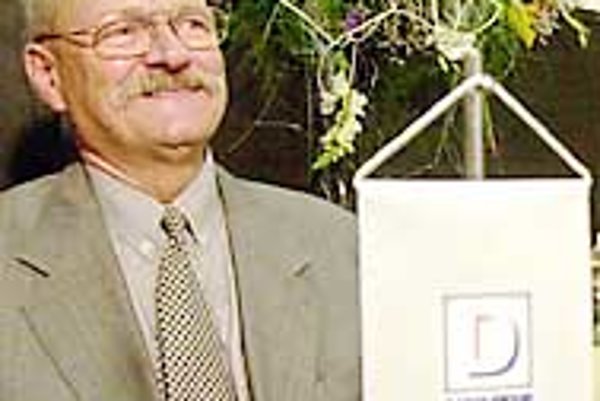 HOW LONG does it take to plan, register and launch a new political party? In Slovakia, with fall elections only two months away, the answer is a little over a week in the case of opposition rebel Ivan Gašparovič and his Movement for Democracy (HZD) party.

Ten days was all Gašparovič and his HZD needed to get themselves registered at the Interior Ministry, hold a founding congress, nominate almost 50 candidates to contest the September ballot, pass and print a 20-page booklet of party statutes and a five-page platform - and collect 30,000 signatures on a petition allowing them to enter the elections.

The results were presented, 12 hours before a pre-election deadline, at a press conference July 17.

The new party has drawn massive interest because of the support it threatens to take from the Movement for a Democratic Slovakia (HZDS) of Vladimír Mečiar, the country's most popular party and the source of about half of the HZD's political talent, according to Gašparovič's estimate.

Western diplomats have repeatedly warned that if the HZDS and three-time Slovak PM Mečiar return to power after elections September 20-21, Slovakia may not be invited to join Nato or the EU later this year. Both bodies dropped Slovakia from entry talks in 1997 because of doubts about Mečiar's commitment to democratic principles.

But while the prospect that the HZDS may lose some of the massive 10-12 point lead it holds over its nearest rival has won the HZD intense media coverage, observers warn the HZD will likely have little real impact on Slovakia's political scene.

"I think they might get several per cent [in elections], but I don't see them getting the five per cent they need to enter parliament," said Grigorij Mesežnikov, a political scientist and head of the Institute for Public Affairs (IVO) think tank in Bratislava. "They will likely take these few per cent from the HZDS, but they are unlikely to attract significant numbers of voters from other parties because there is almost nothing to distinguish them from the HZDS."

Nothing, that is, except the charismatic and controversial Mečiar, who has dominated Slovak political life since entering politics in 1990.

The genesis of the HZD was apparently a national assembly of HZDS members on July 6, at which Mečiar forced through a list of party candidates for elections that did not include Gašparovič or other party members nominated by local HZDS branches. Instead, said HZD deputy chair Marta Aibeková to The Slovak Spectator, wealthy candidates such as spa privatiser Viliam Soboňa and Diana Dubovská, wife of financier Jozef Majský, were given precedence over long-time party faithful, angering grass-roots members.

"People with millions of crowns in property will have a tough time connecting with the HZDS voter base, which is mainly retired people, unemployed people and labourers," she said. "That's why I was so surprised to find such people in leading spots."

Aibeková and Gašparovič also said they had been surprised by Mečiar's angry refusal to allow any changes to or discussion of the candidates list, although both added that the HZDS chairman had seemed steadily more autocratic as a leader since the party was forced out of government in 1998 elections.

"Recently he stopped communicating with me, and we spoke together only at official meetings," said Gašparovič, for years the HZDS' second-most popular figure, in an interview with the Pravda daily. "I felt a change. I think he allowed people into his inner circle who were servile, and even when he made mistakes they approved of what he was doing and perhaps were happy he wasn't making good decisions. They put him in a position where, I think, he started to lose perspective."

Aibeková said that Mečiar as prime minister from 1994-1998 had become steadily more "isolated from the parliamentary caucus, and recently he has been issuing orders through the party leadership and we have just been required to fulfill them."

While the HZDS leadership initially painted Gašparovič and Aibeková as merely sulking at not having made the candidates list - HZDS MP Oľga Keltošová said she had thought Gašparovič "had left his political puberty long behind him" - the HZD has drawn strong support from HZDS district leaderships in Žilina, Rimavská Sobota, Košice and Banská Bystrica, according to Mesežnikov.

The speed with which the HZD took shape also drew speculation that the break with the HZDS had been carefully prepared beforehand, a charge the new party's founders have denied. "It was a spontaneous reaction from people [in the HZDS] who said to themselves: Enough is enough," said Aibeková

Aibeková's former colleagues in the HZDS also smelled a rat in the fact, as Mečiar pointed out, that Interior Minister Ivan Šimko of the ruling SDKÚ party had registered the HZD in two days, compared to the 30-day limit the ministry is allowed.

While stopping short of accusing the government of encouraging a split in the HZDS, Mečiar said in an interview with the opposition daily Nový deň that he would "leave it up to the free opinion of readers" the meaning of the fact that Šimko had approved the HZD registration "unusually quickly", and that Prime Minister Mikuláš Dzurinda's SDKÚ had welcomed the HZD as a party of "strong people".

"The HZDS is under intense external political pressure," Mečiar said.

The HZDS leader himself has turned up the heat with comments linking Gašparovič to privatisation scandals "that hurt the HZDS", as well as having plotted behind the backs of the party leadership at the head of "a group of over-ambitious individuals who tried to use pressure tactics".

"Gašparovič can't expect to leave, copy our name and programme, and leave us with [privatisation] cases that hurt the HZDS," said Mečiar.

"It was clear that there was an attempt to create a wing within the HZDS. Ivan Gašparovič warned of this twice, with concrete names. He himself kept quiet about his own ties, even denied having any. We examined our communications channels, the reactions in some districts after some visits, votes in parliament, media connections - and the name was on the table. To make sure we didn't do him an injustice we examined all the evidence again - not one person, but 12 people. We had to decide whether to wait or to outmaneuver him. We had nothing to lose. It would have been worse to enter elections with the risk that afterwards our whole parliamentary caucus fell apart.

"If this was not indeed the sad truth, it would have been enough to watch Ivan Gašparovič's behaviour at the nomination congress, which was an honest shock for most delegates, who asked themselves: 'So this is the famous Gašparovič?' If anything was scandalous, it was his behaviour. Attempts to subvert the congress and the voting. It was deeply below his name and standing.

"Many see Gašparovič's departure as a split in the HZDS. Mistake. We didn't split. We cleaned our ranks," said Mečiar.

Gašparovič, for his part, has denied the accusations, and announced that the party would sign a 'fair play' deal with other political forces pledging not to use dirty or negative campaign tactics.

"I was not and am not connected with any privatisation scandals. These are the methods Vladimír Mečiar uses. I expected him to dream something up and say all kinds of things like that."

The HZD is running on a centre-left platform based on "national, Christian" values stressing respect for law, investment into education and health care reform.

Gašparovič says he aims for a "double digits" election result, and that while the HZDS would be a natural post-election partner for the HZD, he would not enter any political alliance that was "not in the interest of Slovakia".

While refusing to answer a question as to whether working with Mečiar was "in the interest of Slovakia", Gašparovič said that "time will show if it [Mečiar's reputation in the West] changes."

"I don't agree with the statements of foreign officials when they dictate for whom the Slovak voter has to vote," the new HZD leader said. "Of course, as a country applying for membership, we will be able only to accept, not protest, their conditions.

"I think if our party gets into parliament we will be seen abroad to an extent in a different light."