WITH ELECTIONS less than a week away and political rhetoric heating up, a close look at the economic programmes of Slovakia's leading parties reveals a lack of substance and a blurring of lines between political right and left, says a recent study.
All of Slovakia's major parties are pointing to the same economic issues as priorities under the next government - a near 18 per cent unemployment rate, unravelling fiscal discipline, debt-ridden schools, a still-unreformed health care sector, a failing pay-as-you-go pension system and continuing sluggish growth in investment.
However the study, carried out by the non-partisan F.A. Hayek Foundation, a Bratislava-based organisation which promotes free market principles, says that few parties have set concrete plans for how to solve such economic problems, or how to pay for them. 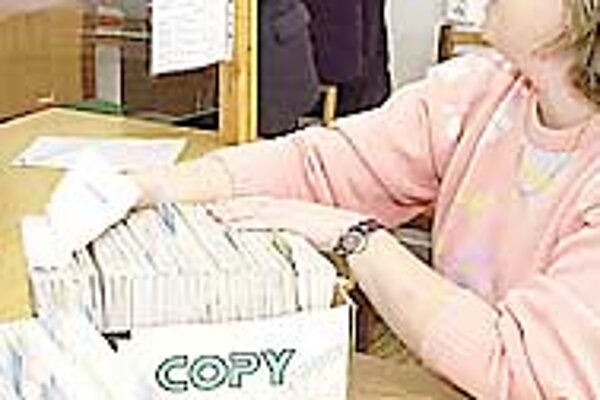 Font size:A-|A+  Comments disabled
WITH ELECTIONS less than a week away and political rhetoric heating up, a close look at the economic programmes of Slovakia's leading parties reveals a lack of substance and a blurring of lines between political right and left, says a recent study.

All of Slovakia's major parties are pointing to the same economic issues as priorities under the next government - a near 18 per cent unemployment rate, unravelling fiscal discipline, debt-ridden schools, a still-unreformed health care sector, a failing pay-as-you-go pension system and continuing sluggish growth in investment.

However the study, carried out by the non-partisan F.A. Hayek Foundation, a Bratislava-based organisation which promotes free market principles, says that few parties have set concrete plans for how to solve such economic problems, or how to pay for them.

This means that foreign markets, which have been drooling at the prospect of a right-based cabinet leading Slovakia after September 2002, may be disappointed with the policies of the new wave of ostensibly conservative politicians.

According to the results of the five latest political polls, right-wing parties could hold as many as 73 seats in the 150-seat chamber, just shy of an outright majority. In the 1998-2002 Dzurinda government, the left wing held 8 of 12 cabinet seats and almost 40 mandates in parliament.

Hayek project coordinator Martin Chren said that while many parties had nailed the main economic threats, few had told voters the cost of curing them. "No party has said that to fulfil their promises they will have to take money from the pockets of citizens," he said.

In addition, says the study, parties painting themselves as centrists, and even some considered right-wing on the Slovak political landscape, are pushing an increase in state intervention in the economy.

"The [non-parliamentary] Smer party, for example, is surprising. Although it says it will support personal entrepreneurship, its proposals do not go along with this at all," said Chren.

Under leader Robert Fico, an ex-member of the reformed communist Party of the Democratic Left (SDĽ), the Smer party has been running neck-and-neck atop recent polls with three-time PM Vladimír Mečiar's opposition Movement for a Democratic Slovakia (HZDS), which has dominated Slovak politics since 1993 independence.

While Fico has been an outspoken advocate of reducing social benefits to long-term unemployed people, as well as of increasing fiscal discipline, his party has also expressed reluctance to part with state companies not yet privatised, and has threatened to re-open a done deal between Slovakia and the EU on closing an ageing nuclear plant.

"The key issues for us now are the foreign trade balance and the deficit in public finances," said Smer's Dušan Muňko, who privatised the Satur travel agency in a controversial deal under the third Mečiar government.

"It is clear that debts will have to be paid," he added in a presentation of the party's economic programme before the International Club of Slovakia.

However, Muňko also supported greater state involvement in the distribution of public funds, and said that although Smer wanted to reduce the social dues burden on employers, "loss of direct taxes has to be compensated by an increase in excise taxes."

In spite of Smer's promotion of itself as a centrist 'third way', Chren said, "you can't distinguish [Smer's programme] from a philosophy of state intervention, ergo socialism."

Surcharges paid by employers into Slovakia's social and welfare system, which reach 38 per cent of each employee's gross salary, are a target for other parties as well, which point to the high costs combined with the country's rigid labour law as keeping the unemployment rate high.

Deputy PM for Economy Ivan Mikloš, the economic guru of the right-wing government Slovak Democratic and Christian Union (SDKÚ) party, at the same meeting called the existing system "expensive, ineffective and non-transparent", and added that "we need to lower the payment burden."

Other self-proclaimed right-wing parties, including the governmental Christian Democrats (KDH) and the non-parliamentary New Citizen's Alliance (Ano) of media magnate Pavol Rusko, are also pushing for a lowering of payment burdens on employers, as well as a reworking of the tax and labour codes.

The Christian Democrats (KDH) ruling coalition party have proposed a 14 per cent flat personal income tax rate and a reduction in social benefits, mainly through shortening the period that unemployed people are eligible for state pay-outs.

"Everyone who receives state benefits should be actively involved through his or her talents," said KDH member of parliament Július Brocka, criticising what he called the passive nature of Slovakia's unemployment system.

"People understand the period of collecting [unemployment] benefits as a chance to rest," he added.

Ano is also promoting a simplification of the tax code and lowering personal income taxes to 15 to 19 per cent from as much as 38 per cent at present, possibly later enacting a flat tax.

The Hayek report notes that the party is alone in expressing a quantitative fiscal goal - reducing state budget expenditures by a third over the next four to six years.

The 2002 state budget is now expected to overshoot its Sk37 billion goal by more than Sk10 billion, bringing the deficit from a targeted 3.5 per cent to 4.5 per cent of GDP. Slovakia has received warnings about sloppy fiscal discipline from international financial monitors.

In tandem with its proposed fiscal and tax cuts, Ano wants to increase the 'flexibility' of Slovakia's labour force by rewriting the Labour Code, which now limits overtime, and proposes to allow contract jobs based on specific tasks or short-term periods.

"Cheap labour is only a relative advantage [in attracting foreign investment]," said Ano vice-chair Robert Nemcsics, former head of office at the Finance Ministry under the last Mečiar government, pointing out that with EU integration, Slovakia's relatively low wages would gradually rise, eliminating what has been a major draw for foreign firms.

The right-leaning governmental Hungarian Coalition (SMK), widely seen as Slovakia's most stable political party, also recognises the need to open up the labour market, but would like to combine that with further privatisation of state assets, fiscal discipline and a reduction of government involvement in the economy in order to attract investors.

"Slovakia needs foreign capital," said László Gyurovszky, number four on the party's election roster, adding: "The SMK supports the reduction of the role of the state and the development of private capital."

While the SMK is generally viewed as rightist, the Hayek report discounts the party's image, noting that its proposals to offer state support for entrepreneurs, to protect domestic producers and to lend state money point to limitations of free market mechanisms.

The left-wing opposition HZDS party vows it will reduce unemployment to 15 per cent, largely through what former deputy PM and former Finance Minister Sergej Kozlík calls "a reorientation from final consumption, which is not sustainable, to production factors."

Other leftist parties, including the SDĽ, the splinter Social Democratic Alternative (SDA) and the unreformed Communist Party (KSS), are advocating even greater state involvement throughout the economy.

The SDĽ, which has gone through a spectacular implosion since garnering a near 15 per cent share of seats in the last parliamentary elections, is even advocating the founding of new state firms, a step the Hayek report called, "a return to the 1950s".

However, none of the three are being given more than an outside chance of receiving the five per cent voter support necessary for representation in parliament.