IT WAS NO knockout blow, but the punch thrown by an irate Vladimír Mečiar at a reporter a week before elections destroyed the three-time Slovak prime minister's last chance of proving he had changed his heavy-handed ways.
"If you ask me that one more time, I'll punch you so fucking hard you won't know what hit you," Mečiar told Joj TV reporter Ľuboslav Choluj before aiming a blow that the reporter deflected with his microphone.
The attack occurred on September 13 outside the public Slovak Radio building, where Mečiar had been due to appear on a political talk show ahead of September 20-21 elections. Choluj had twice asked Mečiar where he got the money to pay for his sprawling Elektra villa in west Slovakia's Trenčianské Teplice. 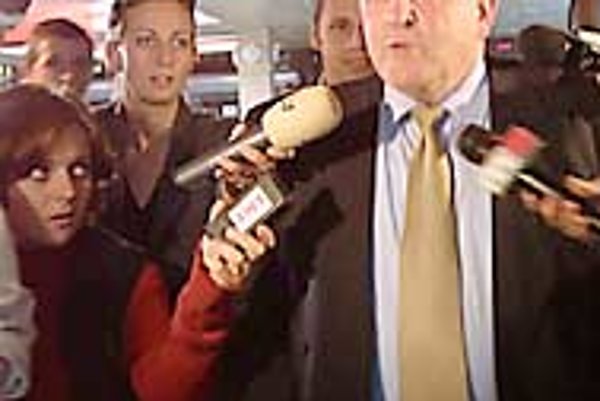 Font size:A-|A+0
IT WAS NO knockout blow, but the punch thrown by an irate Vladimír Mečiar at a reporter a week before elections destroyed the three-time Slovak prime minister's last chance of proving he had changed his heavy-handed ways.

"If you ask me that one more time, I'll punch you so fucking hard you won't know what hit you," Mečiar told Joj TV reporter Ľuboslav Choluj before aiming a blow that the reporter deflected with his microphone.

The attack occurred on September 13 outside the public Slovak Radio building, where Mečiar had been due to appear on a political talk show ahead of September 20-21 elections. Choluj had twice asked Mečiar where he got the money to pay for his sprawling Elektra villa in west Slovakia's Trenčianské Teplice.

While Mečiar later denied he had attacked the reporter or used obscene language, saying Choluj had stepped on his heels and that he had acted in self-defence, the incident was recorded by a TV camera and made available on the Internet.

Mečiar's outburst underlined how frustrating the 2002 election campaign had been for his opposition Movement for a Democratic Slovakia (HZDS) party.

US diplomats carried out a concerted campaign to isolate the HZDS and its leader, whom they believe do not respect basic democratic principles, by saying that if Mečiar or his party returned to power Slovakia would not be invited to join the Nato alliance at an expansion summit in November.

Slovak political parties joined ranks, with all major election contestants declaring they would not cooperate with Mečiar after elections, whatever the party's vote results.

Even before recording its lowest-ever election result since its 1991 formation, at 19.5 per cent, the HZDS was submarined by the departure of several long-time party faithful to form the rival Movement for Democracy (HZD) in July. The defections plunged the HZDS from over 27 per cent voter support to below 19 per cent in several major early September polls.

"Mečiar's behaviour in recent weeks showed what an unpleasant position the HZDS found itself in," said political analyst Grigorij Mesežnikov, head of the Institute for Public Affairs think tank in Bratislava.

"Not only had the party lost a great deal of support after the formation of the HZD, but it was far more isolated than in [previous national elections in] 1998. Mečiar said several times quite openly that he felt the entire world was against him, and that the West was using a double standard in judging him.

"This isn't the first time Mečiar has shown such aggressive behaviour, but it certainly has roots in his apparent frustration, and coming as it did a week before elections, I think it had a far greater effect on voters than any similar thing he has done before."

Fighting almost complete domestic and international isolation, the HZDS election campaign produced none of the bombast seen in 1998, when model Claudia Schiffer and actor Gerard Depardieu, among others, visited Slovakia to join Mečiar at election events.

Nor was the same massive spending in evidence, which in 1998 had supported a 10,000-strong HZDS nomination rally in the Trnava football stadium, and helicopter overflights of a HZDS rally in Prešov.

In June 2002, the HZDS borrowed Sk12 million to finance its election campaign from the J&T financial group, anchoring the loan with the state budget support parties receive for election results.

Gone were the massive rallies of four years ago at the Pasienky sports hall in Bratislava. The ČTK press agency reported that election rallies even in the HZDS' traditional voter bastion, west Slovakia's Trenčín region, were only half full in the weeks leading up to the ballot, while the Sme daily paper reported a no-show by Mečiar at a September 16 rally in Nitra.

Another HZDS rally in Trenčín saw a physical attack by security guards on an apparently drunk heckler, which was recorded by the state TASR news agency.

"It was a mistake. Don't blow it out of proportion," said rally organiser Gabriel Martiška of the incident, in which the heckler was removed by security from the hall, thrown on the grass and held by the neck.

Mečiar himself was hounded by journalists following revelations that he had paid at least Sk41 million to refurbish Elektra, a sum far exceeding his legal income over the previous decade.

The man he brought forward to explain the money, Swiss businessman Peter Ziegel, told the Sita news agency he had lent Mečiar up to Sk100 million in 1999.

But while police investigated whether Ziegler had declared the loan to the central bank as required by law, the daily Sme reported that he was wanted in Austria for tax evasion, in Russia for fraud, and in Switzerland for money laundering and forging US banknotes.

"What was necessary to say was said. People who want to understand are satisfied, those who are less willing to understand will not be satisfied," said Mečiar when asked about Ziegler on a September 13 talk show with the TA3 television station, before leaving the studio only minutes into the scheduled half-hour broadcast.

For Mečiar's political opponents, his recent behaviour confirmed their belief that the man who pushed through the country's independence in 1993 was no longer fit to lead the nation a decade later.

"His is the behaviour of a sick and irresponsible person for whom aggression is the only way of dealing with the simple fact that he lies. This aggression hides the fact that Mečiar simply doesn't know how to explain the origin of his wealth in an acceptable way," said František Šebej, head of the parliamentary integration committee.

With the West still awaiting either an explanation or a mea culpa from Mečiar for several crimes that occurred under his 1994-1998 government, such as the torture and kidnapping of the then-president's son and the thwarting of a Nato-entry referendum, French political analyst Jacques Rupnik said that Mečiar's political career seemed at an end, for Slovaks as well.

"This time around Slovaks are going to make repairs, and everyone is aware that history will not offer them such a chance [to join Nato and the European Union] a second time," Rupnik said several days before elections.