AS THE WINNER of weekend elections, the HZDS opposition party invited journalists to join in a champagne toast at its headquarters after the polls closed on September 21.
It felt more like a wake than a victory celebration.
After scoring 19.5 per cent support, its worst-ever election showing since its 1991 formation, the HZDS was rejected as a government partner in immediate post-ballot statements by the leaders of the four pro-Western right-wing parties that had taken a narrow majority in parliament. 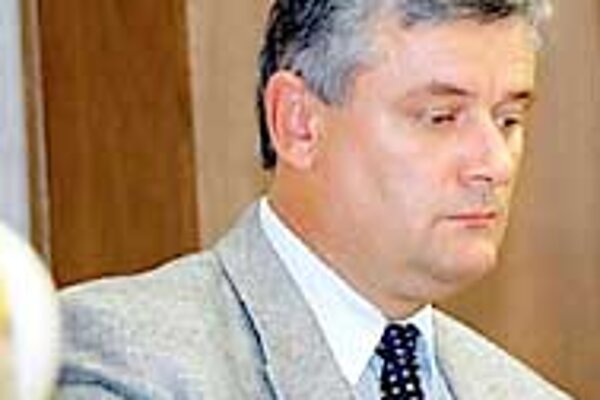 Font size:A-|A+0
AS THE WINNER of weekend elections, the HZDS opposition party invited journalists to join in a champagne toast at its headquarters after the polls closed on September 21.

It felt more like a wake than a victory celebration.

After scoring 19.5 per cent support, its worst-ever election showing since its 1991 formation, the HZDS was rejected as a government partner in immediate post-ballot statements by the leaders of the four pro-Western right-wing parties that had taken a narrow majority in parliament.

"I personally expected 25 per cent," said Rudolf Žiak, the HZDS vice-chairman for foreign relations during one of his brief public appearances.

HZDS leader Vladimír Mečiar, whose authoritarian policies while in power for much of the 1990s had been condemned by Western governments and domestic politicians, failed to show for the champagne, leaving journalists groping for answers. Would Mečiar resign after leading the party into opposition two elections in row? Was he angry with his team for failing him, or with the West for doubting him?

"You'll have to ask him. I don't know what his feelings are," said HZDS spokeswoman Žaneta Pittnerová after the first election prognoses started coming in.

But as the post-election week passed, and Mečiar's political isolation was confirmed, political analysts called the vote result a personal blow for the three-time Slovak prime minister.

"Even though the HZDS gained the most votes in the elections, given the fact that for the second time in a row it was unable to form a government, the election result was a failure, especially for the party's chairman," said Soňa Szomolányi, head of the political science department at Comenius University in Bratislava.

HZDS officials, however, were not ready to say outright that Mečiar should be replaced at the head of the HZDS.

"Even though we won the elections, the result cannot be considered a success," said HZDS member and former Finance Minister Miroslav Maxon.

"Reform certainly awaits the party, because we need to start a policy of communication with all political parties. But I will certainly not comment on the person of the chairman," he said.

"Personal responsibility should be drawn by all parties. I don't see why the election winner should open this question 10 minutes after elections," said HZDS vice-chair for human relations, Vojtech Tkáč.

"Why should he?" Pittnerová asked when questioned whether Mečiar would resign.

Some blame for the HZDS result was put on former Mečiar intimate Ivan Gašparovič, whose breakaway HZD party formed only 71 days before elections drove a rift among HZDS voters, even though it only took just over three per cent support in elections.

"Of course it's thanks to us that the HZDS had so few votes," said Martin Sarvaš, the head of the HZD's pre-election campaign.

However, Sarvaš said that the HZD had not taken all HZDS defectors, and in fact that the party had had too little time to stop some supporters from leaching to other ranks, such as the surprise Communist Party, which broke into parliament for the first time since 1993 with 11 seats.

"It's our fault that these people [who stopped supporting the HZDS after Gašparovič left] eventually went to vote for the communists and not us," said Sarvaš.

Gašparovič has said he will leave politics and return to private life.

The success of the KSS drew barbs from other elections disappointments, among them the country's two far-right nationalist parties.

"Older people know how well off they were before 1989, and that's why they voted for the KSS. Even though it's a twisted ideology," said Ján Slota, boss of the Real Slovak National Party (PSNS).

The PSNS was one of the several parties that failed to reach the five per cent mark required for getting into parliament.

Slota said he would resign at the upcoming meeting of the party's central council on October 5.

He also offered an explanation for why elections had brought success to parties he said threatened Slovakia's sovereignty: "Slovaks are probably genetically stupid."

Slota was particularly bitter that a major rift with the Slovak National Party (SNS), which he used to lead, and its new boss, Anna Malíková, had divided the nationalist vote and kept both parties out of the new parliament.

"If SNS members don't kick Malíková out of the party, then this party is finished," he said, adding that the SNS chairwoman was "not completely normal" and was "controlled by the Russian Mafia".

Malíková herself called the election results "shocking", and blamed media attacks and the PSNS for the SNS not making it back to parliament. She refused to say whether she would resign.

"Right now we're just dealing with the shock, so I will therefore take some time to think it over," she said.

Representatives of Slovak left-wing parties were more self-reflective. The leader of the Democratic Left Party (SDĽ), Pavel Koncoš, who turned a 14.7 per cent result in 1998 into a less than 2 per cent return in 2002, resigned his seat immediately.

However, when Peter Ponický, Education Minister in the current Dzurinda government, expressed his willingness to run for the SDĽ leadership, Koncoš fought back.

"We've already had one male model in the leadership," he said, referring to SDĽ founder and current election leader of the SDA party Peter Weiss.

Like the socialists, parties representing the Roma lost any chance of being represented in parliament during the following four years.

The two Roma parties running for elections managed to get only 13,000 votes from the almost 500,000-strong minority.

"We've done our most for the Roma, but they proved to be an irresponsible ethnic group," said Ladislav Fízik, chairman of the Political Movement of the Roma, which received 0.2 per cent in the elections.

"The Roma will not recover from these elections soon, because no one will be willing to risk leading Roma parties," said Fizík.

The leaders of both Roma parties announced their resignation after elections.

One election disappointment who has rejected notions he might resign or lose heart is Robert Fico of the third-place Smer party, whose 13.5 per cent fell far short of the 20 per cent Smer had aimed for.

Fico agreed on September 24 to enter opposition, despite having campaigned on a 'Fico for PM' slogan, and said he would "conduct aggressive opposition politics that have nothing to do with the Communists and the HZDS.

"If I had less than five per cent I would hang my head like a dog. But we didn't lose elections. We have better results than three parties in the [next] ruling coalition. If anyone lost, it was the SDĽ."

In vivid contrast to the losers, diplomats who had watched the results celebrated the departure from parliament and political life of many politicians they said had lowered the tone of the Slovak legislature since the country's independence in 1993.

"We're going to have a much better parliament," said Slovak Ambassador to Washington Martin Bútora on September 21 in an interview with The Slovak Spectator.

"The next few years are clearly going to be much more about policy than politicians."