EVERY MORNING that 61-year-old Dagmar Janská sets out to go shopping, she awakens anyone still sleeping in her housing block by starting her Trabant.
With the power of a sewing machine and the voice of a clogged vacuum, the Trabant has been a fixture on Slovakia's roads since first rolling out of East-German factories in 1958.
It remains, for some, inexplicably popular - even though Trabant production ceased in 1994, an estimated 50 per cent of the three million made are still in use across central and eastern Europe. 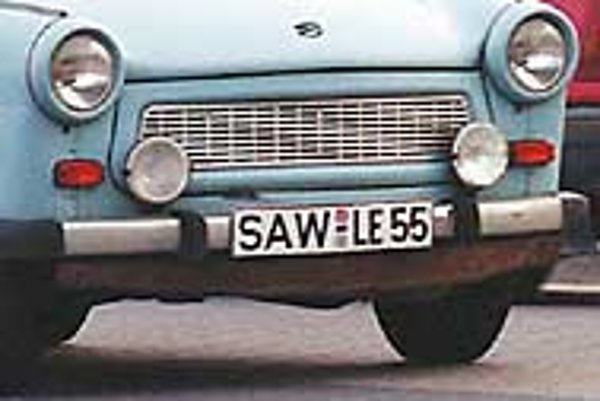 Font size:A-|A+  Comments disabled
EVERY MORNING that 61-year-old Dagmar Janská sets out to go shopping, she awakens anyone still sleeping in her housing block by starting her Trabant.

With the power of a sewing machine and the voice of a clogged vacuum, the Trabant has been a fixture on Slovakia's roads since first rolling out of East-German factories in 1958.

It remains, for some, inexplicably popular - even though Trabant production ceased in 1994, an estimated 50 per cent of the three million made are still in use across central and eastern Europe.

Janská admits she often has to help start the 20-year-old engine in her Trabant by pushing it down the hill and popping the clutch. But it's not about practicality - it's about love.

"I'd be completely lost without my car," Janská says, favouring the light-blue Trabant with a warm glance and resting a proprietary hand on the immaculate hood.

"I've tried other cars, but this one seems as if it was made for me. It's very easy to drive and take care of. I can even fix some things on it myself, even though I'm not a mechanical type at all."

The Trabant, whose metal skeleton was wrapped in a cotton-reinforced, plastic skin and 'powered' by a two-cycle, 594CC engine, was originally meant to be East Germany's response to the West German Volkswagen.

East Germans later dubbed the tiny car "go-kart" and "lawn mower", and joked that while the Horch firm had tried to make a car that was comfortable, economic and ubiquitous, it had succeeded only in the latter.

"These cars were largely made of what was called 'duro-plastic', and caused many smiles, but the East Germans were actually very proud of them," says Peter Kyčina, a doctor of internal medicine in Liptovský Mikuláš and the owner of two Trabants.

"On the other hand, you could say that's because other cars weren't available at the time, except for the Wartburg, the blood-brother of the Trabant."

Around 12,000 Trabants are still registered in Slovakia, although the local traffic police say that two-thirds are in an advanced state of dilapidation.

Most of the people still driving Trabants in post-communist countries are poorer citizens for whom the Trabant represents a cheap and easily repaired means of transport.

"The annual repair cost for a Trabant is several hundred crowns ($5), while you can buy quite a good engine for two bottles of Slivovica [home-made hard alcohol]," says Kyčina.

A new group of owners has emerged, however, whose interest in the Trabant threatens to keep the little bangers on the road a few years longer.

For people like Kyčina - relatively wealthy car collectors - owning a Trabant is a matter of prestige.

"I became attracted to the Trabant in 1994, after one of my patients let me drive his. I was completely taken by this cute, small vehicle that has such a distinguished character of its own.

"Maybe I also wanted to be different from other people. Today, when you drive a Citroen or Mercedes, you're nobody special. But you surely are with a Trabant," says Kyčina, who organised the first meeting of Slovak Trabant lovers for 15 years in June 2002 in Kremnica.

Kyčina also owns a Škoda Felícia and a Citroen Berlingo, but his patients can often see him driving to work in one of his beloved Trabants.

"Different people look at me in different ways. But usually it's a look full of human understanding, because most of them used to drive something similar," he says, adding that his Trabant often serves as a conversational ice-breaker with nervous patients.

Both Kyčina and Janská drive their uncomfortable, no-springs but firm-riding Trabants on the freeway as well, where the speed limit in Slovakia is a Trabant-defying 130km/hour. While Kyčina, whose car is in perfect condition, can sometimes keep up with other traffic, Janská's "Bakelite buddy", as she calls it, tops out at 80 kilometers per hour.

The pair say that the police rarely stop them, and whenever they do, usually just end up laughing rather than reaching for their ticket books.

Major Jozef Čermák, head of the traffic inspectorate in Trenčín, says that police have no brief to get Trabants off the road, and that "if it's in good condition and not threatening public safety, we approach a Trabant the same way as any other car."

Čermák adds that the Trabant is also popular with police because "there are almost no accidents involving Trabants, because they can't go fast enough."

Richer owners with 'souped up' Trabants may not fit the car's sedate model for long, however. Kyčina says he has a Czech friend who was stopped by police for driving his Trabant at 162 km/hour.

"He framed the ticket and put it on the wall," Kyčina laughs.