IN THE ONLY major battle over seats in the next Slovak cabinet, the Christian Democrats party fought for - and won - the Interior Ministry seat, beating out incumbent Ivan Šimko from the outgoing Mikuláš Dzurinda government.
With the four centre-right parties that secured a majority victory in September 20-21 elections on the verge of announcing their new cabinet slate, the Christian Democrats' insistence on the Interior Ministry post stood out against an otherwise calm division of power. 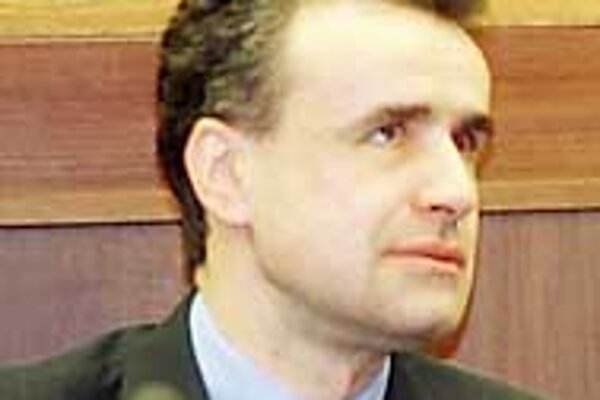 Font size:A-|A+  Comments disabled
IN THE ONLY major battle over seats in the next Slovak cabinet, the Christian Democrats party fought for - and won - the Interior Ministry seat, beating out incumbent Ivan Šimko from the outgoing Mikuláš Dzurinda government.

With the four centre-right parties that secured a majority victory in September 20-21 elections on the verge of announcing their new cabinet slate, the Christian Democrats' insistence on the Interior Ministry post stood out against an otherwise calm division of power.

Party officials and political observers said the importance of the seat lay in the Christian Democrats' traditional preoccupation with control over security and police forces, as well as in the party's desire to see its 'safer Slovakia' platform anchored in the government programme.

"When you look at it from a historical perspective, the Christian Democrats [KDH] have always stressed security and public safety. These are covered by the Interior and Justice Ministries," said KDH spokesperson Vladimír Pčolinský.

Despite an agreement among the coalition parties not to leak deals and squabbles before a final government contract was signed, KDH chairman Pavol Hrušovský broke the agreement less than a week after elections, saying his party "insisted" on its candidate taking the Interior Ministry seat.

The move was sharply criticised by the leaders of the other three centre-right parties.

However, on September 30, PM Mikuláš Dzurinda, tipped as the head of the country's next government, said the KDH had won its case over Dzurinda's Slovak Christian and Democratic Union (SDKÚ), and would be taking the Interior Ministry seat.

The Christian Democrat's candidate for the post is expected to be Vladimír Palko, another in a long line of KDH Interior Ministers and a security expert in his own right.

The KDH has been a part of a Slovak government three times. Anton Andráš in 1990 was the KDH's first Interior Minister, but was replaced in November of the same year, following an ultimatum by then-PM Vladimír Mečiar.

Andraš's replacement, Ladislav Pittner of the KDH, became Interior Minister again in the short-lived 1994 government of Jozef Moravčík, and again in 1998 under the Mikuláš Dzurinda administration. He was replaced in 2001 by former KDH Justice Minister and SDKÚ secretary general Ivan Šimko.

The KDH has also traditionally played dominant roles in the secret service itself, as well as in the Attorney General's Office and the National Security Agency, which currently vets state officials for trustworthiness in handling classified documents.

Grigorij Mesežnikov, head of the Institute for Public Affairs think tank, said the KDH's concern with security bodies was in part motivated by its traditional struggle against the continued power of former communists.

Many KDH members served time in jail as dissidents under the 1948-1989 communist regime.

"Both the KDH and the SDKÚ see the Interior Ministry as an effective power tool," said Mesežnikov.

"It [the KDH's interest in the Interior Ministry] may be a result of the lesson they learned when the former [Mečiar] government attempted to abuse the intelligence service against the political oppostition," said political scientist Ľuboš Kubín of the Slovak Academy of Sciences.

Under Mečiar, members of the SIS secret service were accused of orchestrating the kidnapping of the son of the then-president, Michal Kováč, as well as planting a bomb at a KDH political rally.

However, the KDH's behaviour was also seen as natural, given the party's concern with reducing crime in the country.

"The KDH has both the policy and the experts it needs in this field, and Palko has always been one of their top ones," said Mesežnikov.

One of the main pillars of the party's security programme is its 'Safer Slovakia' doctrine, designed by Palko and Daniel Lipšic, tipped as the KDH's Justice Minister in the next government. In this document, the KDH offers six measures to reduce crime and increase public security, such as toughening sentences for criminals, prohibiting cloning, and requiring police officers to disclose their assets.

"It was drawn up this year and I'm absolutely certain it will be included in the government programme," said Pčolinský.

Ironically, the KDH proposal, in requiring people tapped by a state prosecutor to prove they obtained their assets through legal means, is virtually identical to a measure proposed by opposition politician Robert Fico.

However, when the parliament voted on Fico's draft in April 2002, no member of the KDH caucus supported it.

Lipšic explained that the Fico draft had been too simplistic, at five paragraphs in length, and that the new KDH bill would be more sophisticated.

A large part of the KDH's pre-election programme in the security field, on the other hand, dealt with border protection, particularly against smugglers of illegal migrants. The issue is of major concern in the country's preparation for EU membership in 2004, and the party has proposed creating a patrol system that would see millions of euros in state and EU money channeled towards firms selected to carry out the work.

"The KDH supports the installation of an automatic, defence monitoring system on the eastern border," reads the KDH's pre-election programme. "The Slovak-Ukrainian border, the future border of the EU, must be made secure."

On May 27 this year, Dzurinda announced that Slovakia would contribute 25,000,000 euros to tighten the border, across which most migrants from Asian and east European countries are believed to cross on their path West.

Interior Minister Ivan Šimko said in March that he intended to select a firm to carry out the border work by spring 2002, although public procurement officials at the Interior Ministry were unable to provide any information regarding the case when contacted by The Slovak Spectator this week.

"It didn't filter down through the ranks at all. They dealt with it at the highest ministry level," said Pavol Kuruc, head of the ministry's economy division, adding that only the minister, the ministry head of office and one of the section directors had been involved in the selection process.

Other ministry officials did not respond to questions, although office head Ján Michalko said through a secretary that "I am personally not involved in this."

Pčolinský said that Palko had been responsible for having the border defense system included in the party's election programme. Palko himself was unavailable for an agreed interview on the topic.

Analysts said that despite past concerns that EU money had been misused in Slovakia, the KDH's interest in the Interior Ministry and thus jurisdiction over border defense contracts should not raise eyebrows.

"I don't think their [KDH's] interest [in controlling the Interior Ministry] is motivated by the fact that the ministry will now administer funds for securing the border," said Mesežnikov.

Kubín agreed: "There's much more money in other fields."