SINCE BEING tipped for the post, incoming Finance Minister Ivan Mikloš has been promising that the country's new centre-right government will not be deterred from launching the tough reforms it has vowed, even at the cost of social unrest.
Calling the majority victory of four ideologically united parties in September elections "an unrepeatable opportunity", Mikloš has said the new cabinet will change restrictive laws, sell off most remaining state assets and reduce the tax and levy burden on businesses in its four-year term in office.
Reform of the education, health care, pension and social benefits systems - the core of the new government's programme - will force the government to recruit support from the civil service, which over the past four years has been one of the staunchest defenders of the status quo. 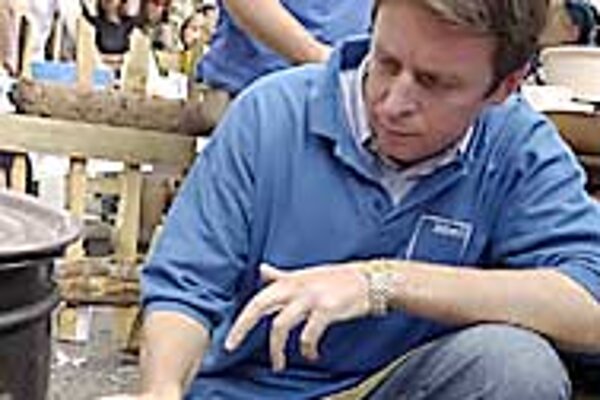 Font size:A-|A+  Comments disabled
SINCE BEING tipped for the post, incoming Finance Minister Ivan Mikloš has been promising that the country's new centre-right government will not be deterred from launching the tough reforms it has vowed, even at the cost of social unrest.

Calling the majority victory of four ideologically united parties in September elections "an unrepeatable opportunity", Mikloš has said the new cabinet will change restrictive laws, sell off most remaining state assets and reduce the tax and levy burden on businesses in its four-year term in office.

Reform of the education, health care, pension and social benefits systems - the core of the new government's programme - will force the government to recruit support from the civil service, which over the past four years has been one of the staunchest defenders of the status quo.

The government will secure this support, Mikloš says, by amending a civil service law to allow state managers to give higher pay to more proficient workers, as well as to dismiss incompetent employees more easily.

Mikloš adds that planned increases to regulated utility prices, combined with increases in consumption taxes, will reduce real wage rises and cool domestic demand, helping the nation deal with some of its worst macroeconomic problems, such as its trade and fiscal deficits.

Finally, the total burden of taxes and social fund payments will be reduced, although taxes might initially rise before the government launches spending cuts. The money businesses save, he adds, will help create new jobs and reduce Slovakia's 18 per cent jobless rate.

Despite the many economic changes made from 1998-2002, Ivan Mikloš says the work facing the new government will be even more taxing. The Slovak Spectator spoke to the new Finance Minister on October 10.

The Slovak Spectator (TSS): For four years, in interviews you have done with this paper, you have pointed out the "stupid mood", or unjustified pessimism, of people in Slovakia, and believed it would see a government returned in September elections that was even less pro-reform than the 1998-2002 administration. The opposite has happened. Why?

Ivan Mikloš (IM): That's a very complex issue, and would require a long study of economic, psychological, cultural factors and what have you to explain.

All have a part to play in what happened, as does good luck - the crumbling of the [opposition] Slovak National Party, the departure of [former top opposition HZDS party official Ivan] Gašparovič, [non-parliamentary Smer party's leader Robert] Fico's bungling of his campaign . . .

Maybe, too, some media just went too far in their criticism of the government, using unprofessional and unfair methods, and people just weren't buying it.

TSS: What are the main tasks awaiting you at the Finance Ministry?

IM: The budget and the people.

TSS: What do you mean by "people"?

IM: Finding and hiring the most competent people I can, because we're going to have a lot of work for them and it's going to be very demanding.

TSS: Foreign markets have seen you these last four years as an architect or guarantor of reform, or at least of fiscal sense. Will you play the same wider cabinet role as Finance Minister, for example through your personal friend, Labour Minister Ľudovít Kaník?

IM: I hope my role will be even more significant from the point of view of being able to influence things, for a number of reasons. First, I will be both Deputy Prime Minister and Finance Minister, which is a more influential role than before. Also, given the makeup of the government [the absence of anti-reform leftist parties] there will be fewer brakes to reform this time. And finally, we have chosen ministers who have not only the ability but the will to carry out reforms.

On the other hand, we have to realise that the work before us is more difficult than what is already behind us. Reforms to the social benefits system, health care, education, agriculture, pensions, the enforceability of the law and public finances will be, at a minimum, more demanding than what we have done so far.

TSS: One of the most pressing problems is in public finances, where you've already had to increase your original deficit target for this year because of election-related spending. What is your public finance deficit aim for 2002 now?

IM: This year's deficit should be kept roughly at the original target level, around 3.9 per cent of GDP [the original aim was 3.5 per cent - ed. note].

TSS: National bank vice-governor Elena Kohútiková said recently she thought Slovakia should enter the European Monetary Union [EMU] as soon as possible following the country's EU entry. However, this would mean not only lowering the public finance deficit, but also changing your methodology. At the moment the Finance Ministry produces a state budget deficit figure, then a public finances deficit figure, and admits even a third variable under Maastrict criteria which includes bank restructuring costs. When are we going to see some plain talk on the Slovak public finance deficit?

IM: Let me deal first of all with the central bank's arguments for joining the EMU, which I admit are relevant. Their main point is that open economies like Slovakia's could be vulnerable through currency movements if it kept its own currency. The second point is that joining the single currency would relieve the national bank of some very burdensome expenses.

On the other hand we would have to fulfill the inflation criteria for EMU membership, and prices in Slovakia are now far lower than prices in the EU [and thus could be expected to grow swiftly following entry - ed. note].

But the main point that I think we all agree on is that regardless of when we join the EMU, it will be best for the economy if we meet the criteria for EMU entry as soon as possible. Then we can freely decide whether to enter the EMU immediately or later.

As far as our deficit figures go, we are already fixing the [2002 state] budget on the basis of my comments and proposals. We are going with a budget that contains all of these deficits, and while it will not be able to completely redo this year's budget according to these criteria, the 2003 budget will include 100 per cent of public finance liabilities, including bank restructuring costs and bad state loan guarantees. We also want to radically improve the transparency of the budget, and not leave any hidden or controversial elements.

TSS: Two weeks ago the European Commission gave an exemption to several EU countries, allowing them to meet EMU deficit criteria two years later than planned, in 2006 rather than 2004. Given that the European Union has for so long been painted in this country as an example for Slovakia to follow, could this decision discourage the government from keeping the fiscal belt tight, according to the reasoning, "Why should we bother if they aren't following their own rules"?

IM: It could have such an effect, although I hope and believe it won't. All four ruling coalition parties have declared that regardless of the situation in the EU, we regard lowering the public finance deficit as a priority. As I said before, meeting the EMU criteria as soon as we can, regardless of when we enter, will improve our economic efficiency and the health of the business environment.

TSS: With the sale of a minority stake in the Slovenské Elektrárne (SE) energy utility already underway, it looks like you don't have much left to sell off to foreign investors. Is this the case, or will you be selling further stakes in already-privatised firms?

IM: My opinion is that we need to sell off these stakes. There is no reason the state needs to keep them, and above all, all four parties have said they want to launch pension reform with as strong a capital pillar as possible. That means large expenses in the transition from one system to another, and that the Sk65 billion [$1.5 billion] we already have is only a fraction of what will be needed.

That means that apart from selling the SE minority stake, we will have to change the law to allow us to sell a majority in SE as well as the SPP [gas utility], Transpetrol [oil pipeline operator], the three energy distributors and a few others. We also have the SAD local bus networks that have not yet been sold, as well as the VaK water and sewage utility and the railway companies that will gradually be sold off.

TSS: What is the future of the investment incentives you have been offering to foreign investors?

IM: We won't be able to offer them, or only in a very restricted sense, because of European legislation, but I don't see that as a problem because our biggest competitors for foreign investment will face the same EU conditions. At the same time, we have an advantage in that our market is not yet saturated [with foreign investment], while we also offer cheaper labour that is at least as highly qualified as workforces in neighbouring countries.

TSS: We've seen Seat move production of the Ibiza from Spain to Bratislava recently, Whirlpool move production from Amiens to Poprad. Is Slovakia going to get into trouble with its new EU partners if factories keep leaving richer countries for poorer?

IM: It's going to keep happening as globalisation and liberalisation continue. Competition creates pressure to reduce costs, and Slovakia will soon be able to offer completely comparable legal, economic and business environments while at the same time cheaper labour. It will be a major stimulus for the movement of production from the West to the East.

TSS: Isn't that going to bother anyone in the West?

IM: It shouldn't. I don't think you will see such a massive movement of production that it would cause any major problems.