Should Schuster see a shrink?

PRESIDENT Rudolf Schuster has enraged Slovak doctors by recommending that a European Commission (EC) official be "very wary about Slovak hospitals".
He made the comment in small talk prior to an official audience with Eric van der Linden, head of the EC delegation, in Bratislava in October.
A limping Van der Linden told the president that he had had one of his legs treated at a local hospital, prompting Schuster to express his low opinion of his country's health services. 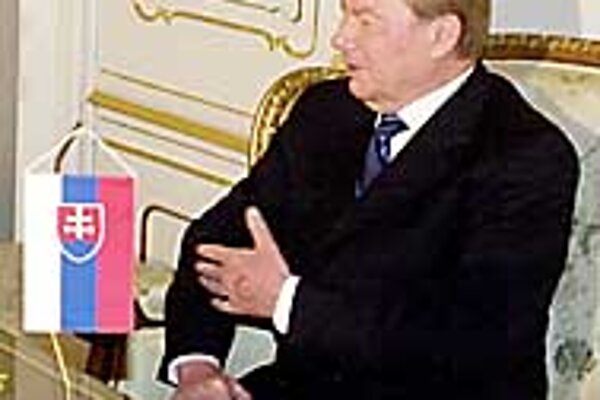 He made the comment in small talk prior to an official audience with Eric van der Linden, head of the EC delegation, in Bratislava in October.

A limping Van der Linden told the president that he had had one of his legs treated at a local hospital, prompting Schuster to express his low opinion of his country's health services.

Many health professionals have condemned the president's comment, which they say was ill-considered, given his considerable influence.

"I talked about that remark with my colleagues and much of what we said couldn't be published in a newspaper," said doctor Norbert Kučerka from a hospital in Veľký Krtíš.

"The president was expressing his subjective opinion, but he probably doesn't realize that with remarks like that he's increasing a lack of public trust in his own country's health care system," he added.

But Schuster, who is currently suing a Slovak doctor for negligence after the doctor allegedly botched an operation on the president's perforated colon two years ago, would not retract his comment, claiming he had only articulated "what the people think".

"I stand behind what I said. I don't think we are telling secrets [to foreign officials]. They know more about us than we think. Ambassadors do not live in isolation and they know a lot about how things work here," said Schuster.

The president nearly died after the operation on his perforated colon in Bratislava in June 2000. He recovered after being treated at a hospital in Innsbruck, Austria.

Many believe that Schuster's lack of trust in the Slovak health care system became evident again in late August, when the president fell ill with a fever. After a week of Slovak doctors failing to identify the cause of his illness, Schuster accepted the offer of Austrian president Thomas Klestil and underwent a series of medical checks in Vienna's AHK hospital.

After the president's latest critical comment, some doctors have suggested that Schuster needs to get psychiatric help, blaming the president's unfortunate experiences with Slovak doctors for his negative attitude.

Bratislava psychologist Peter Breier told Twist radio: "The fact that the president is still afraid of the Slovak health care system means that he has yet to overcome the trauma he went through [during the operation on his colon]."

"No matter who you are, if you go through that type of experience, you should not hesitate to see a psychiatrist. If [the president] consulted a psychiatrist about what happened to him, he might have a different attitude towards his country's health care system," Breier said.

But Schuster's spokesman Ján Fule defended the president, saying that the head of state had simply intended to make a "witty informal remark".

Kučerka, however, did not find the remark witty at all.

"It was far from witty. The president probably thought that because he was having a private chat with someone, he could express his personal opinions. But I think that since a head of state has no privacy at all, he must always be careful about whatever he says, particularly during official meetings," Kučerka said.

Van der Linden, on the other hand, later told the press that he had "every reason to be happy" with the Slovak doctors who treated him.

That sentiment was echoed by the Slovak Chamber of Doctors (SLK), which said it thought the president's statements were out of place.

Nevertheless, observers note that Slovakia's unreformed health care service is currently tackling a number of problems resulting from a lack of funds and growing indebtedness. It is not unusual for patients to bring their own soap and toilet paper to hospital.

Still, the accuracy of the president's comments was not the main issue of contention. Instead, most people were upset that he so openly criticised a national institution in front of a visiting diplomat.

"Although our health care system has to deal with a number of problems, I don't think the president's statements will help the sector out of its misery," Christian Democrat Alojz Rakús said.