With a final decision on EU enlargement just weeks away, some members are reconsidering the pros and cons of accepting Slovakia and nine other candidate countries into the Union in 2004.
In Ireland on October 19, voters delivered a resounding endorsement of the Nice Treaty, which lays down the framework for EU expansion. However, in Luxembourg a few days later, EU foreign ministers failed to come to an agreement on how enlargement should be funded. Negotiations on enlargement must be wrapped up by a December deadline. 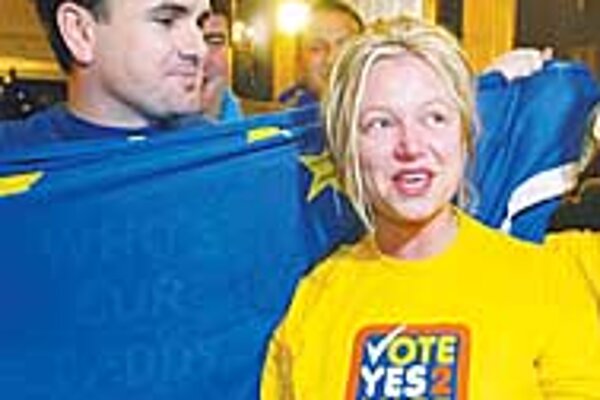 Font size:A-|A+  Comments disabled
With a final decision on EU enlargement just weeks away, some members are reconsidering the pros and cons of accepting Slovakia and nine other candidate countries into the Union in 2004.

In Ireland on October 19, voters delivered a resounding endorsement of the Nice Treaty, which lays down the framework for EU expansion. However, in Luxembourg a few days later, EU foreign ministers failed to come to an agreement on how enlargement should be funded. Negotiations on enlargement must be wrapped up by a December deadline.

The ratification of the Nice Treaty by all member states is a precondition for further expansion. Ireland is the only country that required a popular vote on the treaty, and voters rejected it in a referendum last year. This time around the Irish government managed to increase voter turnout and the treaty was endorsed by 63 per cent of those casting ballots.

Irish Prime Minister Bertie Ahern expressed the euphoria felt throughout Europe when the results of the referendum became known.

"We want to welcome the people of the applicant countries into the EU with open hearts as well as open minds," he said.

The results were warmly welcomed by officials in all candidate countries, including Slovakia.

"The Irish voters demonstrated the solidarity and maturity worthy of a member of the European family of states," said President Rudolf Schuster, who thanked the citizens of Ireland for giving Slovakia the chance to enter the EU in 2004.

PM Mikuláš Dzurinda also thanked Ahern on behalf of Slovakia for the "great work the Irish government has done in the interest of a positive referendum result".

EU officials confirmed that the Irish referendum was a major hurdle to have overcome on the road to an enlarged EU.

"Let me say that the result of the Irish referendum has made life a lot easier as regards enlargement," said Onno Simons, Counsellor for the EU, Delegation of the European Commission in Slovakia.

Further relief for supporters of expansion came when the foreign ministers of EU member countries at a meeting in Luxembourg on October 23 agreed to back plans to take in 10 new countries, including Slovakia.

There had been fears that a caretaker Dutch government would block the entry of Slovakia, Poland and Latvia, because such a move had been threatened by ruling coalition politicians in the Netherlands just days before the Luxembourg meeting. Dutch officials had been concerned that those three candidate countries were insufficiently prepared for EU membership. They also said that the current system of financing had to be changed before new members were admitted.

But the Dutch coalition government collapsed on October 16, and the interim government decided that blocking expansion was not the best way of achieving their ends.

"A veto would greatly harm the position of the Netherlands, including in the longer term and with respect to other issues," said Dutch PM Jan Peter Balkenende at the meeting of the Dutch Council of Ministers four days before the Luxembourg meeting.

But despite the Irish endorsement of the Nice Treaty and the backing of enlargement by EU foreign ministers, some serious obstacles to Slovakia's EU entry remain. All eyes are now on the meeting of heads of governments in Brussels scheduled to take place on October 24, where certain key issues have to be agreed upon if the December deadline is to be met.

"How to finance the enlargement and agricultural subsidies are the main problem," said Simons.

France and Germany have clashed over a German proposal for significant cuts in farm aid before enlargement takes place. Ministers also failed to reach agreement on the total amount of regional aid to be paid to new members. The EC has suggested 35.5 billion euros in aid for all 10 countries between 2004 and 2006. Germany thinks 21.4 billion euros would be sufficient.

Worries about how to finance EU enlargement are also bothering the general public in the member states. According to Eurobarometer, an opinion poll carried out in EU countries, 49 per cent of people fear that their countries will lose EU financial support because of the enlargement, and 51 per cent are worried about how much the process will cost.

The survey released on October 21 in Brussels also shows that only half of EU member states' citizens support enlargement, while 30 per cent oppose it. Only 38 per cent of those questioned were in favour of Slovakia joining the EU, and the same number were against.

However, observers suggest that these numbers should not be taken too seriously by Slovakia.

"I think the commitment to EU enlargement on the political level is strong," said Simons. "[The unsolved problems] will have to be tackled sooner or later and I think they will be tackled in Brussels," he added.

With the pre-entry negotiations between the EU and 10 candidate countries to be concluded this year, and a definite decision on the admission of new members to be taken at the Copenhagen summit this December, there is a lot of pressure on officials to find feasible solutions to remaining problems.

Any delay in the process may come as a disappointment to Slovak voters. A recent opinion poll compiled by the Focus agency showed that almost three-quarters of Slovaks are in favour of the country's entry into the EU.

However, experts say there is still enough time left to clear the final hurdles.

"Difficult questions are always left till last and I don't think we should be too concerned. There are still two months until Copenhagen," Simons said.