ANTIRACISM activists and legislators have renewed calls for racism in Slovakia to be dealt with as a priority on a national level.
The comments came after an international scandal erupted over the behaviour of some Slovak football fans at a match in Bratislava. During the Euro 2004 qualifier on October 12, some Slovak fans chanted racist abuse at black players in the visiting England national team. In response, the English press branded Slovakia a nation of racists. 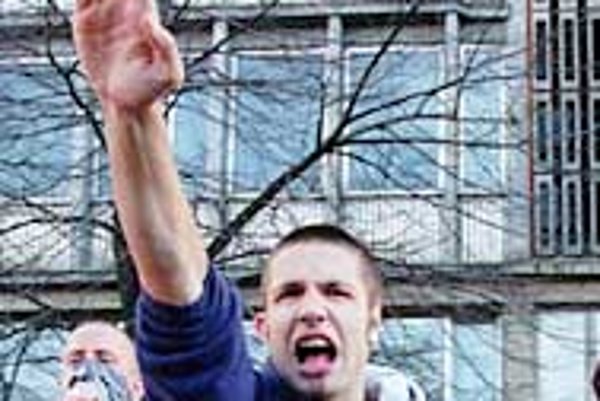 Font size:A-|A+  Comments disabled
ANTIRACISM activists and legislators have renewed calls for racism in Slovakia to be dealt with as a priority on a national level.

The comments came after an international scandal erupted over the behaviour of some Slovak football fans at a match in Bratislava. During the Euro 2004 qualifier on October 12, some Slovak fans chanted racist abuse at black players in the visiting England national team. In response, the English press branded Slovakia a nation of racists.

Slovakia has repeatedly been told by such institutions as the European Commission (EC) that it should deal more strongly with racist elements in society. Local antiracism activists have stressed that if top authorities do not take the problem very seriously, racism may cause big problems for the nation.

"Racism is an everyday issue in Slovakia, and the kind of racism that was seen at the [recent] football match has been here for years," said Ladislav Ďurkovič, head of the People against Racism (LPR) non-governmental organisation. He said he expected a war against racism to be waged by the new cabinet.

Following the England-Slovakia football match, the Slovak Football Association (SFZ) defended its fans, stating that racism was only a problem among a small group of local hooligans, rather than among all Slovak football fans.

The SFZ said it had already taken steps to eliminate racism from football grounds, but added that everyone in society should get involved in an antiracism campaign.

"We have already begun a complex campaign against racism at our grounds, but we want it to involve schools as well as the media. It's definitely a problem for society as a whole," said František Laurinec, president of the SFZ.

Police statistics say that there are about 3,500 neo-nazi supporters in Slovakia. The Interior Minister from 2001 to 2002, Ivan Simko, started to fight extremists in earnest some time ago. He set up a joint commission that enabled investigators, officers and activists to sit around one table regularly, so they could coordinate their actions.

New Interior Minister Vladimír Palko has said that one of his top goals is fighting "extremism" and all other forms of violent behaviour. However, he too called for other members of society to join in.

On October 20 Palko said: "It is not just the job of the Interior Ministry to teach some 1,000 football fans how to behave properly. It's a big task for all of us. We have to denounce all such expressions of racism."

But denouncing racism might not be enough, suggested the EC in its recent report on Slovakia's progress to accession.

The report stated that in Slovakia there "continue to be reports of racially motivated violence, in particular directed against persons belonging to the Roma community, and the alleged failure of the law enforcement authorities to take action in a number of these".

However, Peter Mikuš from the Police Presidium said that one of the problems police faced when dealing with racially motivated crimes was the lack of witnesses. Because of the nature of these crimes, people are often too afraid to help the police.

"It often happens that people witness various incidents in the streets, but they are scared to interfere and are also scared to talk as witnesses to the police," he said.

Over the last five years the official number of racially motivated crimes has grown from eight cases in 1995 to 40 in 2001, but activists claim that these figures don't represent the true situation.

Ďurkovič said that the actual number of cases is "at least 100 times higher", because many incidents go unreported.

The previous cabinet approved an extensive action plan aimed at preventing all forms of discrimination, racism, xenophobia, anti-Semitism and other forms of intolerance in March 2002.

The plan involves training police, judges, prosecutors, soldiers and civil servants so that they can better deal with race cases. It also calls for the launch of a number of activities in the educational sector and enhanced cooperation between state institutions and NGOs in their efforts to prevent discrimination.

It is still unclear what steps the new cabinet will take in this area. In the document laying out the government's programme for the next four years, the cabinet stated that it was aware of the "multiethnic character of Slovak society" and it guaranteed extensive protection of human and minority rights.

A more detailed assessment of the cabinet's goals - the so-called cabinet manifesto - is currently being discussed by the coalition partners, and is due to be presented in parliament on November 5.

Interior Ministry spokesman Boris Ažaltovic told The Slovak Spectator that the ministry was determined to "be tough about eliminating all expressions of racism".

MPs too have expressed their readiness to assist in making Slovakia a tolerant European nation.

László Nagy, Hungarian Coalition MP and head of the parliamentary human rights committee said: "There is a general intolerance towards 'otherness' in Slovakia. It's a serious social problem and we have to deal with it."