IF it were not for his wife, who discovered a chest in her attic containing old photos of Czechoslovak children, the world would never have learned about Nicholas Winton. And if it were not for director Matej Mináč, the story would probably never have left British shores.
For nearly 50 years, 93-year-old Winton kept secret the story of how he saved 669 Jewish children from Nazi-occupied Czechoslovakia, bringing them across Hitler's Germany to his native Britain. But today he is known as 'Britain's Schindler'. 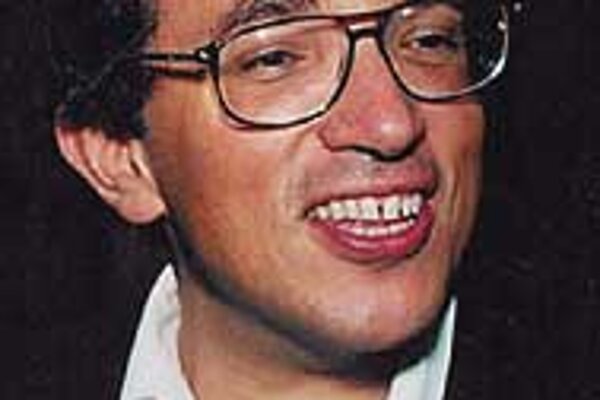 Font size:A-|A+  Comments disabled
IF it were not for his wife, who discovered a chest in her attic containing old photos of Czechoslovak children, the world would never have learned about Nicholas Winton. And if it were not for director Matej Mináč, the story would probably never have left British shores.

For nearly 50 years, 93-year-old Winton kept secret the story of how he saved 669 Jewish children from Nazi-occupied Czechoslovakia, bringing them across Hitler's Germany to his native Britain. But today he is known as 'Britain's Schindler'.

The first time Mináč used Winton's story was in the fictional 1999 film Všichni moji blízcí (All My Loved Ones) which is about the family of one of the children he saved. Then, after two years of interviews and collecting historical material, he released the documentary Sila Ľudskosti (The Power of Good). The documentary, after being shown in several countries around the world, was nominated for an international Emmy award, becoming the first Slovak film to be honoured this way in the history of television and film.

The Slovak Spectator recently spoke to Mináč about his success.

The Slovak Spectator (TSS): When did you first meet Nicholas Winton?

Matej Mináč (MM): When I first learned of his rescue mission from a news story in 1998. It hadn't occured to me that Mr. Winton would still be living. I only thought of him as a historical figure. So the fact that he was still alive surprised me.

When I met him at his house in Maidenhead, near London, I was taken aback. I found an agile man, with amazing energy, a sense of humour and sharp memory. And he was nearing 90! It immediately occurred to me that I had to act and make a film about him.

TSS: Who is the real Winton, in your eyes?

MM: He is an extraordinary man who did an amazing thing and told nobody about it, not even his wife. At the same time, he is so 'ordinary'. You can discuss football, tennis or gardening with him. He used to be a champion fencer in Britain. After the war, he and his brother founded a national fencing competition, the Winton Cup. It's still the most prestigious fencing competition in Britain and Mr. Winton still hands the trophy to the winner every year.

TSS: The Power of Good is the first documentary film to be made about this modest stockbroker. Why didn't a British filmmaker tell this story?

MM: Frankly, I wondered why British filmmakers didn't seize the opportunity to tell this beautiful story. One of the children he rescued asked director Karol Reisz (The French Lieutenant's Woman) the same question. He told me that people are tired of Holocaust stories; today such themes aren't 'in' anymore.

However, I disagree. It's not about the Holocaust, which is only a backdrop to the story. It's about a deeply touching story, which asks the audience questions like: 'Would I, as a parent, be able to say goodbye to my children, knowing that I might never see them again?' It's like Sophie's Choice, which wasn't so much about the Holocaust as it was about the choice a mother had to make. Which one of her children would live? What mother could have answered that question?

TSS: What message do you hope to send with your work?

MM: I try to be honest, I don't like films that send a message or try to teach a lesson...

What I liked about the story was that a 29-year-old Englishman, instead of taking a ski trip to Switzerland, went to Prague, where he saw the tragedy of the refugees and decided to act. The obstacles didn't scare him away and he stubbornly pursued his goal of saving the children. In the end, even though everybody predicted he would never get the children to Britain and find adoptive parents, he did it! He believed that rescuing children was possible.

TSS: This documentary is not the first time Winton has appeared in one of your films. The first time was in All My Loved Ones (currently showing in the US). Why did you decide to cast him as himself?

MM: At the end of this film I used footage from a 1988 BBC programme that showed Winton meeting about 100 of the children, now adults, that he saved in 1938. That footage was very touching, because neither the children, nor Winton, expected such a meeting would ever happen. At the end of the film, everyone in the studio cried. My editor, Patrik Paššo, and I had achieved something special. Those shots we used at the end of the film underscore the film's whole story, because the story we are narrating is itself very realistic.

TSS: Before you started to work on these two films, hardly anyone in the world knew about Winton. Is that still the case?

MM: The tables have now turned.

Ambassadors from 10 of the countries where the children Winton saved now live came to the film's New York premiere in September. Viewers, who almost filled all 900 seats at Symphony Space theatre, gave the film several standing ovations. Mr. Winton also met Bill and Hillary Clinton and the governor of the state of New York, George Pataki, presented him with a certificate of merit.

TSS: Your film has recently gained popularity in Winton's homeland, at a festival of films made by filmmakers from EU candidate states. What did the British think of your film?

MM: Before the September 25 screening, UK Minister for Europe Peter Hain gave Winton a framed letter of recognition signed by Prime Minister Tony Blair. The reaction of Brits was as expected. The whole audience broke down in tears and gave a vigorous round of applause at the film's end.

TSS: Has your film somehow increased Britain's interest in Slovakia's entry into the EU?

MM: I think our participation in the festival made an impression on them - that EU expansion will ultimately benefit the film industry as a whole.

TSS: Your documentary is the first Slovak film to be nominated for an iEmmy Award. How do you feel about this?

MM: The nomination really surprised me. This particular Emmy Award is given to the best program made for television outside the US. The fact that we managed to get to the finals in the documentary category without having any major television organisation backing us surprised me even more.