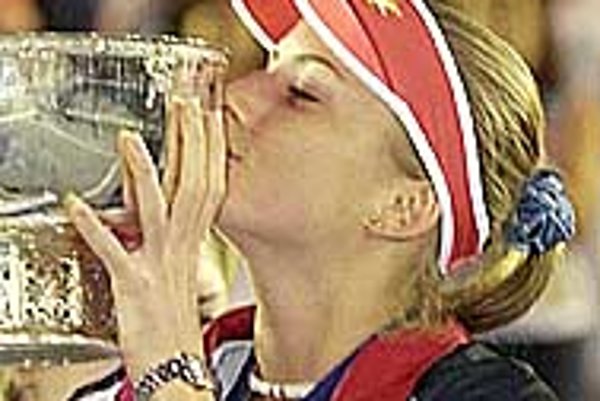 The teams were tied with one win each after games Saturday November 2, when 19-year-old Daniela Hantuchová defeated Magui Serna in two sets 6-2, 6-1 and Janette Husárová lost to Spain's Conchita Martinez, also in two sets.

It was the matches on Sunday November 3 that scooped the cup for Slovakia. After a battle of over three hours, Hantuchová secured the lead in a match against Spain's number one, Martinez.

"It was very hard to put her under pressure, but in the end I think I was physically better than her," said Hantuchová.

Meanwhile, Husárová clinched her match in just one hour, after an easy 6-0, 6-2 win over Spanish veteran Arantxa Sanchez-Vicario, who was playing in her record-breaking 100th match and 58th tie in the competition.

"It is a great feeling," Husárová said after the match. "I was fighting for all of us. You really have to be there to really know how it feels."

Team coach Štefan Čižmarovač praised his players, saying: "This is clearly the biggest success ever for Slovak tennis. We've become the world champions in a top women's team competition. This team has enormous inner strength, and I am happy that I could be their coach."

The team's achievement in the Canary Islands lifted the spirits of many in the country, and may have a lasting impact on society as a whole, according to experts.

"I think [a win of this kind] definitely has an influence on people's moods, although we have done no exact studies on the issue and I can speak only hypothetically. It can influence national pride and can motivate people to achieve more.

"In the broader social context it is without any doubt a positive impulse, especially for young people," said Eva Leiferová, head of the sociology department at Comenius University in Bratislava.

The winning of the Fed Cup comes on the heels of another sporting victory for Slovakia. In May, the country's ice hockey team became the world champions. Members of the women's tennis team wore Slovak hockey jerseys during the weekend of the finals, hoping to reproduce the achievement of their fellow countrymen.

"It really seems to work. All our athletes should dress in hockey jerseys," quipped the daily Sme.

However, there are many differences in the way Slovaks see hockey and tennis.

"More people like hockey, which is one of the most popular sports in the country," said Leiferová.

"Tennis is a more exclusive sport in Slovakia; it does not have mass popularity. It attracts a small number of people who know what it means in today's world," she continued.

Even if tennis is not Slovakia's most popular sport, one thing is certain. As Husárová put it: "This is an unbelievable success. We are the best in the world."

In singles she has played 134 matches in 57 tournaments, with a win/loss record of 83-54. On March 16, 2002, she won her first singles tournament in Indian Wells, California, when she beat Switzerland's Martina Hingis in the finals.

She has had a successful career in mixed doubles. Her first major victory came in July 2001, when together with Czech player Leoš Friedl she beat the US-South African couple Mike Bryan and Liezel Huber in the finals of Wimbledon, becoming the first Slovak winner of a grand-slam tournament in history.

In January of this year Hantuchová and Kevin Ullyet from Zimbabwe won the mixed doubles at the Australian Open. In April she won the Amelia Island doubles title with Arantxa Sanchez-Vicario and repeated that success in August at the Pilot Pen tournament in New Haven, Connecticut.

In this year's Fed Cup she had a win/loss record of 6/2 in singles and together with Janette Husárová won her only doubles match.

Husárová, ranked 54 on the WTA Tour, has had numerous successes, especially in women's doubles. In 1996 she won a doubles title of a tournament in Palermo and in 1997 she won one in Auckland. In 2000 she reached the finals of tournaments in Warsaw and Bogota, and in 2001 she won four tournaments as part of a doubles team. She is still waiting for her first tournament victory in singles.

In February of this year Husárová won a doubles title in a WTA tournament in Doha, Qatar. Interestingly, her partner was Arantxa Sanchez-Vicario, whom she defeated in the decisive match of this year's Fed Cup finals.

Her win/loss record in this year's Fed Cup was 4-2 in singles and 2-0 in doubles.