It's known in Slovak as the nežná revolúcia (gentle revolution), as distinct from the povstanie, or uprising, that occurred at the end of the Second World War. 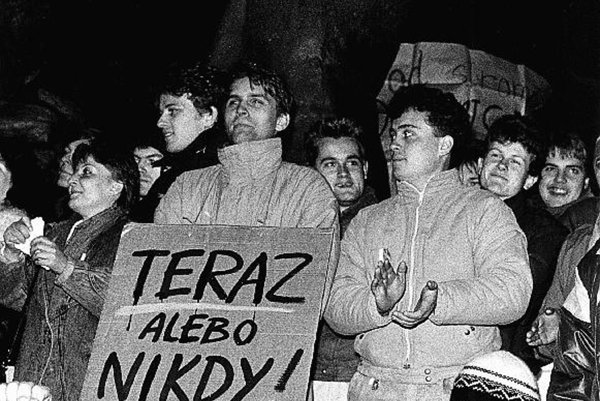 NOVEMBER 17 is the anniversary of the Velvet Revolution, the 1989 overthrow of the communist regime in Czechoslovakia. It's known in Slovak as the nežná revolúcia (gentle revolution), as distinct from the povstanie, or uprising, that occurred at the end of the Second World War.

Is there a difference? A povstanie, perhaps, derived from the verb vstať, to get up or rise, is a more casual and disordered affair, one difficult to fix to a certain day, and, given the fact the word is a Slovak one, one that has a more local place in regional history.

Revolúcia, on the other hand, is a foreign word, one perhaps applied to events of outstanding, or at least greater than merely Slovak, historical importance.

Revolts are obviously slippery events, as are the words used to describe them. As with the Wizard of Id comic strip, and its 'the peasants are revolting' double entendre, Slovak features odpor, meaning resistance as well as disgust. Naraziť na odpor is to meet with opposition; špárať sa v nose je odporný zvyk means 'picking your nose is a disgusting habit'.

There is also a little dispute about who actually started the November revolúcia, with sociologist Ján Bunčák saying a demonstration on November 16 in Bratislava started the whole thing, but it took a larger, and more violent, encounter between students and police in Prague in November 17 to really get the ball rolling.

"Bratislava was then a provincial capital, and things that happened in the provinces were of a lower order than events in the capital," he said.

Whoever was responsible, the revolúcia has given immortal phrases and slogans to the Slovak language. Happening as it did on the main squares (námestia) of cities around Czechoslovakia, it drew even the most timid (nesmelí) from their homes to štrngať klúčami (shake their keys) as a gesture of unity and defiance.

Jozef Majský, now in jail awaiting trial on fraud charges, recalls telling customs officials wanting to inspect his shipments of computers from the far east to "go shake their keys on the square and stop hindering the building of democracy".

On those squares people sported the trikolóra, the blue, white and red of the Czechoslovak flag (memories of 1789), wore budajky (a kind of woolen skull cap made popular by one of the early revolutionaries, Ján Budaj), and were told to "urobte koridor" (make a path) for visiting politicians and ambulances. Which people did, almost as if trained.

The politicians, many united in the Verejnosť Proti Násiliu (Public Against Violence - VPN) party, gave rise to edifying slogans.

How about that old chestnut, "Peter Weiss is very nice", with the transformed communist's name being emblazoned on campaign buttons.

Not that the communists were very popular after 1989: "Voľte číslo desať, nech vás ma kto vešať!" (Vote party number 10 - the Communists - and give them the chance to hang you!) expressed a refusal to bury the hatchet with the country's former leaders.

While it all seems rather innocent and naive today, those slogans were at least more inventive than the "modrá je dobrá" ("blue is good") of the SDKÚ that we saw this past fall, and less cynical than "Za Slovensko, za Tatry, volím číslo dvadsaťtri" (For the sake of Slovakia and the Tatra mountains, I'm voting number 23) of the Slovak National Party.

And Peter Weiss, I'm sure, is still very nice.

Slovak Matters is a bi-weekly column devoted to helping expats and foreigners understand the beautiful but difficult Slovak language.