Slovakia gets ticket to Nato

SLOVAKIA was invited to join Nato at the Alliance's summit in the Czech capital Prague, in the biggest wave of eastward expansion in the organisation's 53-year history.
Slovakia, along with six other post-communist countries - Bulgaria, Estonia, Latvia, Lithuania, Romania and Slovenia - on November 21 received invitations to become members of Nato, which will boost the Alliance's membership to 26.
"This round of enlargement will maintain Nato's strength and its vitality," Nato secretary-general George Robertson said at the summit's opening. 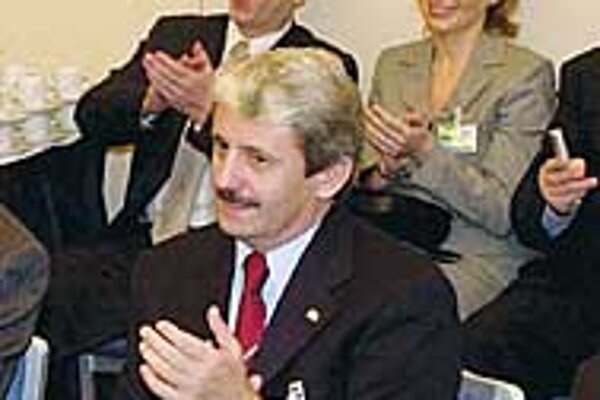 Font size:A-|A+  Comments disabled
SLOVAKIA was invited to join Nato at the Alliance's summit in the Czech capital Prague, in the biggest wave of eastward expansion in the organisation's 53-year history.

Slovakia, along with six other post-communist countries - Bulgaria, Estonia, Latvia, Lithuania, Romania and Slovenia - on November 21 received invitations to become members of Nato, which will boost the Alliance's membership to 26.

"This round of enlargement will maintain Nato's strength and its vitality," Nato secretary-general George Robertson said at the summit's opening.

His bullish attitude was echoed by US president George Bush, who was also at the summit.

"By welcoming seven [new] members, we will not only add to our military capabilities, we will refresh the spirit of this great democratic alliance," Bush said.

The credit for Slovakia's invitation has been widely given to current Prime Minister Mikuláš Dzurinda, who is serving his second four-year term in office and whose administration is seen as having established Slovakia as a democratic, pro-reform state.

"This day is a milestone on our way to enduring security. It is a confirmation of our citizens' hope to be a natural part of a free, democratic and prospering world," Dzurinda said in a statement following the naming of invitees.

Slovakia was dropped from the last round of Nato expansion in 1997, during the administration of former Prime Minister Vladimír Mečiar. As the Czech Republic, Hungary and Poland were invited at that time, Slovakia was the only one of the so-called Visegrad Four states to be excluded from the Alliance.

"A lot work is still ahead of us before we become an actual member, but for now, it is a wonderful and thrilling feeling," Slovak Foreign Minister Eduard Kukan told journalists.

The invited countries are expected to join Nato in 2004, after they sign and ratify the North Atlantic Treaty, Nato's founding act, and after their accession protocols are ratified by the current 19 member states.

Rastislav Káčer, a member of Slovakia's Nato-entry negotiation team, said that a series of "political-technical negotiations" now lay ahead for the invitees' negotiators. He estimated that these talks would take about one year, and then the protocols would be signed.

"These political-technical negotiations will establish how much we will contribute to the Nato budget and what exactly Slovakia's role in the Alliance will be," Káčer said.

Although not yet full members, once their protocols are signed new member states will be entitled to participate at Nato Council and various Nato committee meetings.

"We won't have the rights of full members, but we'll be able to participate in all serious Nato negotiations," Káčer said.

More than 60 per cent of the electorate and all but one of Slovakia's six parliamentary parties, the Slovak Communist Party (KSS), support Nato entry, seeing it as an effective means of improving both the country's defence mechanisms and its economic situation.

"There is a direct link between a country's Nato membership and its living standards. We saw it in Poland, the Czech Republic, and Hungary. Since those countries entered Nato, the interest of foreign investors in doing business there has grown dramatically, meaning new investments and job opportunities," said Dzurinda.

Marek Senkovič, analyst with Istrobanka bank, estimated foreign investments into Slovakia could reach "hundreds of millions of US dollars".

"The security related to Nato membership is important for each investor," Senkovič said.

Ahead of the summit, Czech security authorities did everything they could to prevent terror attacks and outbursts of violence among the anti-Nato protesters gathered at the meeting.

Although no violence had been reported by the time The Slovak Spectator went to press, security forces in Prague had been on high alert ever since the first guest, US president George Bush, arrived at the summit Wednesday November 19.

US fighter jets guarded airspace in Prague, and more than 12,000 police officers, about 2,000 heavily armed soldiers and special anti-terrorist teams were brought in to protect the event's participants. More than 40 heads of states and senior government officials attended the summit.

Apart from expansion, the agenda of the two-day meeting included the development of a military concept for defence against terrorism, and a discussion of proposed measures to increase the Alliance's counter-terrorism capabilities.

"A deadly cocktail of threats is now menacing free societies," Robertson said in his opening speech at the summit.

"We have the organization, the military capabilities and the will to deal with threats to our people and our security from wherever they may come. That is why Nato is enlarging, extending invitations to countries across Europe to enter into accession talks," he said.

Hopes that Slovakia would be on the list of countries invited to join Nato were strengthened three days before the summit, when the Czech Republic's Defence Minister, Jaroslav Tvrdík, proposed that Czechs and Slovaks form a common airspace defense unit.

Tvrdík suggested that the two countries, which until 1993 had lived in a common Czechoslovak Federative Republic, purchase airjets, sharing the costs 50-50. Slovak Defense Minister Ivan Šimko said he would discuss the details of the deal with Tvrdík at the summit.