God, the new boy in class

IF NEW education minister Martin Fronc gets his way, pupils as young as six may soon be taught religion in state schools, a suggestion that has critics insisting the country's cash-strapped education sector should not be paying to shape the beliefs of little children.
Religion is already taught as a mandatory subject to elementary school pupils from fifth grade onward and in high schools, with students having the option to attend ethics classes as an alternative.
Fronc, who is a member of the Christian Democratic Movement (KDH), has suggested that a similar model should be implemented in the four lower grades as well, starting in September next year. 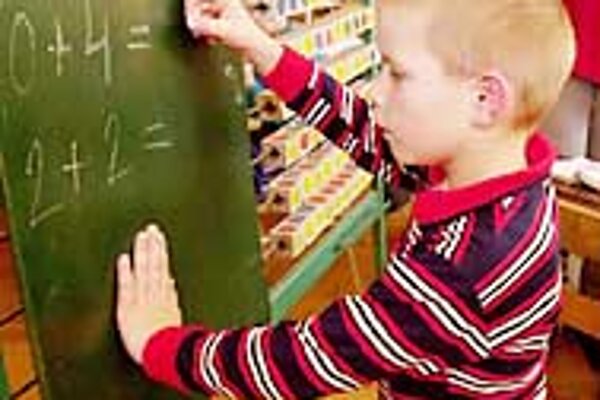 Font size:A-|A+0
IF NEW education minister Martin Fronc gets his way, pupils as young as six may soon be taught religion in state schools, a suggestion that has critics insisting the country's cash-strapped education sector should not be paying to shape the beliefs of little children.

Religion is already taught as a mandatory subject to elementary school pupils from fifth grade onward and in high schools, with students having the option to attend ethics classes as an alternative.

Fronc, who is a member of the Christian Democratic Movement (KDH), has suggested that a similar model should be implemented in the four lower grades as well, starting in September next year.

"I respect the freedom of choice in religious matters, but I also want to guarantee adequate conditions for the religious education of children, in accordance with the conviction and demands of parents," Fronc told the daily Sme.

The Education Ministry, which has the power to make decisions about the national curriculum, has not yet put forward any official proposal regarding the extension of religious education, and some of Fronc's colleagues are keen to distance themselves from the controversial idea.

"No such measure has been officially proposed at the ministry. I think journalists took the verbal statements of the minister and have been making fuss about it," said Deputy Education Minister František Tóth, a member of the liberal Ano party.

"It has not yet been defined what things shall be done, nor how, when, or by whom. No preparatory work has started. I think there is no hurry," he said.

Unlike in other areas of society, there are no generally accepted norms governing religious education in Europe. Each country tackles the issue in its own way, according to its values and beliefs, said Michaela Moravčíková, director of the Institute for the Relations between Church and State.

"This area is not unified at all in Europe and it really differs from country to country," she said.

The main objections to the suggested measure stem from a fear that more classes will require more teachers, which in turn, will require more money. Slovakia's education sector is considered by many to be pushed to its financial limits already.

To assuage such worries, Fronc told the media the move should not lead to an increased demand for finances, as religion is already being taught in schools as an optional voluntary subject. However, that argument has been greeted with scepticism by insiders.

"Every extra hour has to be paid for by someone. I don't agree that it will not have any effect in this regard at all," said Miroslav Ružička, head of the Bieloruská elementary school in Bratislava, adding that few children in lower grades choose to take the optional classes in religion at the moment.

Since children would have to choose between religion and ethics, and teachers need to be found for both subjects, Ružička expects costs to go up significantly.

Tóth agreed that the project would require a lot of resources.

"We will first have to analyse the needs of the parents, then we will have to come up with a new curriculum, buy new books and train the teachers," he said.

Another objection is that religious teaching at such a young age might influence the beliefs of children beyond an acceptable level.

"Children at that age are not able to make independent and free decisions about their view of the world," said Eva Gajdošová from the psychology department of Commenius University in Bratislava.

However, Gajdošová added, school is just one of many factors determining the opinions of children, and the Slovak way of life is deeply rooted in religion.

"We are a Christian country. Our history, culture, and development bear traces of Christian ideas, principles and values. I therefore agree with the introduction of religious education in the lower grades, but only if ethics is offered as an alternative. I also think that each of these subjects should include elements of the other," said Gajdošová.

Groups fighting for minority rights in Slovakia fear this move would lead to a less open and less accepting society.

"I think [teaching religion at this level] is not the correct way to deliver unbiased education," said Marianna Šípošová, spokesperson for the civic initiative Inakosť.

"As the minister is from the KDH, this is exactly what we expected. It is now up to citizen initiatives that aim to achieve a democratic and tolerant society - and are against educating children in one doctrine - to stand up to these efforts," Šípošová added.

Tóth said his liberal Ano party did not have an ideological problem with increased religious education in schools, but only if it was in line with the wishes of parents.

"We feel that if the parents want something, for example religious education, they should be able to get it," said Tóth.

Some lower-grade students are already taught religion in school if they choose it as an optional subject. This is often because the Catholic Church gets involved.

"They already do preparations for confirmations in schools [as part of the optional religious education for lower classes]. Whether it is appropriate to do that in schools is another question," said Ružička.

The involvement of the church is likely to increase over the next few years. The government is considering three new treaties with the Vatican, which the Catholic Church hopes will be passed over the course of the current administration.

One of the treaties will grant the Church the right to have Catholic educators lecturing children on the Christian faith in all state schools.