THE SLOVAK film industry is slowly recovering from a decade of troubles following the country's 1993 split with the Czech Republic, but still needs a lot of support before it reaches levels common in surrounding countries, experts say.
Since the establishment of an independent Slovak republic, the country's film industry has produced only two or three movies per year on average, often less than half the number of features made in neighbouring countries.
"A look at the Slovak movie industry in the year 2002 is filled with question marks," said Peter Dubecký, head of the Slovak Film Institute. 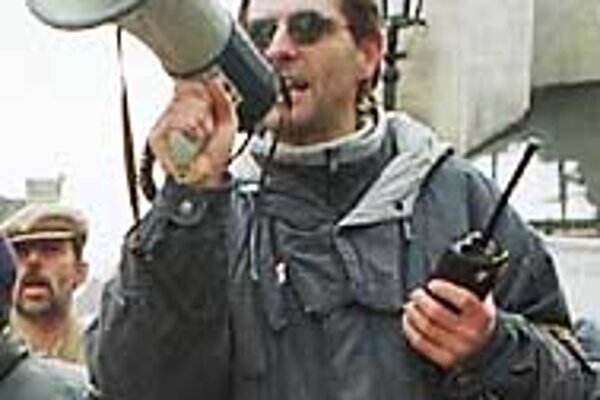 Font size:A-|A+  Comments disabled
THE SLOVAK film industry is slowly recovering from a decade of troubles following the country's 1993 split with the Czech Republic, but still needs a lot of support before it reaches levels common in surrounding countries, experts say.

Since the establishment of an independent Slovak republic, the country's film industry has produced only two or three movies per year on average, often less than half the number of features made in neighbouring countries.

"A look at the Slovak movie industry in the year 2002 is filled with question marks," said Peter Dubecký, head of the Slovak Film Institute.

"On the one hand, it is nice to say that Slovak film, to an extent, has bounced off the bottom," he continued.

"We have had premieres of five movies this year - a fact that proves we can produce quality movies in Slovakia.

"[We have shown that] we are able to draw the interest of foreign film committees and viewers. The [International] Emmy award for the movie Nicholas Winton - The Power of Good, is an example," said Dubecký.

"The results could thus be a springboard for next year, in which six premieres are expected," he added.

However, explained Dubecký, a slight increase in production and an international trophy do not change the fact that much needs to be done to make Slovakia's film industry healthy.

"If we want to talk about a functioning film industry, there are things missing. Slovakia is one of a very few [developed] countries that do not have a film laboratory, which is necessary for the production of films," said Dubecký.

Film insiders have long complained that the technical side of film production in Slovakia is underdeveloped.

Most filmmaking equipment has to be imported, and post-production activities have to be completed abroad, so Slovak filmmakers usually finish tweaking their movies in the neighbouring Czech Republic or Austria.

"Filmmakers in Slovakia will slowly disappear, because they will start working elsewhere. This has already been happening to some extent," said Slovak film producer Rudolf Bierman, who has been behind some of Slovakia's best-known movies.

"It is very hard to build a film team in Slovakia today. Their requirements correspond to what they are used to when they work in Czech Republic or America.

"Of course, some of them still give us a better price when working on a Slovak film, but such discounts will not last forever," said Bierman.

The main problem with the industry, said Bierman, is a lack of financial support from the Slovak government.

"A small country like Slovakia can only produce films using public resources," he said.

"Even the most successful comedy or commercial movie - even if it had a million viewers - would not pay back the production costs," said Bierman.

"[Making] films [in Slovakia] is a very specific and demanding [activity]. If a film is supposed to be in the Slovak language and if it is to become part of our national or cultural heritage, the state simply has to pay for it," said Bierman.

However, the government maintains that the situation has been improving over the last four years, and although the lack of financial resources persists, the industry is far better off than it had been under the 1994-98 government of Vladimír Mečiar.

"Under the [1998 to 2002 Mikuláš Dzurinda] government, when Milan Kňažko was Culture Minister, the state provided approximately Sk240 million ($5.8 million) for the support and development of audiovisual resources," said Bohumír Bobocký, head of the media and audiovisual section at the Culture Ministry.

"Over those four years, 32 film projects were supported. This is 40 per cent higher than during the [previous four-year term of] former minister Ivan Hudec, when only Sk176 million ($4.2 million) was allocated for eight movies, out of which just five were finished," said Bobocký.

With the current government committed to sticking to its austerity budget, there is little money to spare for movies, and the ministry says it is trying to secure other sources of funding for Slovakia's nascent film industry.

"The Culture Ministry is preparing activities that will enable Slovak filmmakers to use international funds effectively," said Bobocký.

One of the new sources, he said, is the European Community's Media Plus programme, which should become accessible to Slovakia at the beginning of next year.

As part of Media Plus, an advisory Media Desk office will be established at the Slovak Film Institute to help make access to funds easier.

"[Media Desk] will be a contact point for filmmakers and producers, providing information on conditions they have to fulfil in order to get all these funds," said Bobocký.

Another possible means of support, Bobocký said, might stem from a reformed tax system, which could make investments into the Slovak film industry more effective.

For Slovak film professionals keen to present the country abroad, the plans come as good news.

"This area is not only the most effective way of presenting national culture, but an important area for developing business activities and creating new jobs," Bobocký said.

"One good movie can sometimes do more for the representation of a country than one big international delegation," he said.