AFTER a boom following the 1989 anti-communist revolution, attendance in Slovak casinos has been steadily dropping, a fact that sociologists link to an underdeveloped entertainment industry and changed living standards among the country's population.
As the country enters a new stage in its history, most Slovaks would rather not fritter their hard-earned cash away betting on games, said Ján Bunčák, a sociologist at the Slovak Academy of Sciences.
"For a poor man, casinos are not very interesting," he said. 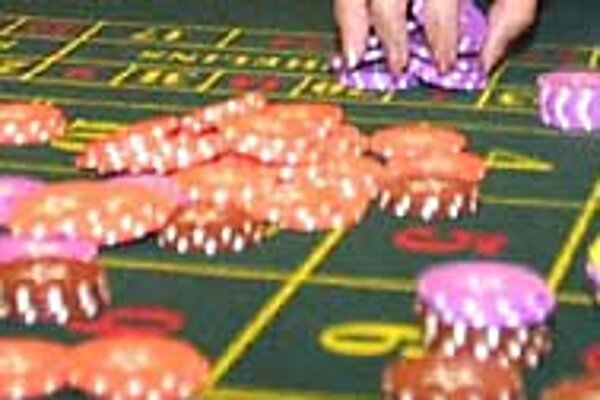 Font size:A-|A+  Comments disabled
AFTER a boom following the 1989 anti-communist revolution, attendance in Slovak casinos has been steadily dropping, a fact that sociologists link to an underdeveloped entertainment industry and changed living standards among the country's population.

As the country enters a new stage in its history, most Slovaks would rather not fritter their hard-earned cash away betting on games, said Ján Bunčák, a sociologist at the Slovak Academy of Sciences.

"For a poor man, casinos are not very interesting," he said.

The Slovak casino industry started in the last days of communism, when a select group of people had a lot of cash to burn. The new casino owners were bracing for a boom, with the first casino employees already attending croupier courses before the November 1989 revolution, according to a report in the daily Sme.

Early clients at casinos were taxi drivers, entrepreneurs and owners of property that had been confiscated by the Czechoslovak communist state and returned following the regime's collapse.

"In the first phase [of casino development in Slovakia] during early 1990s, there was a lot of money among people earned surreptitiously during communism from different sources.

"There were different attempts to collect this money and casinos were one of them. In casinos, money was changing hands very dynamically," said Bunčák.

"Of course, later the whole business started to decline," he added.

At its beginning, employment in the casino sector was considered prestigious and lucrative, while foreign owners of casinos were respected entrepreneurs, according to the Sme investigation.

"The basic pay was good, but the tips were higher. These were sometimes two to three times higher than the basic wage," said Eva Černá, MP for the coalition Ano party who was also employed in a casino during the post-revolution boom.

In return for decent pay, the croupiers were willing to offer companies their loyalty as well as their skills.

Nowadays, the situation is quite different. The once enviable job of croupier is now comparable to that of a waiter. Wages have not changed and a salary of Sk20,000 ($482) per month is no longer greatly above average.

As a result, some croupiers are trying to make illegal profits from their job, according to the Sme investigation. There have been reports, for example, of players and croupiers working together to cheat casinos.

And when a casino discovers that it is being cheated, pit bosses and owners prefer to deal with the matter privately rather than through the police, Sme says, pointing out that casinos do not need their newly fired employees talking about casino business in public or to police.

Official figures show that Slovak casinos are struggling, which has raised suspicions that gaming houses are being used to launder money. Casinos have long been suspected centres of money laundering all over the world, and the same may be true in Slovakia, says Sme, where low revenues call into question the very existence of several casinos.

While casino income in the neighbouring Czech Republic grew to Kč10 billion ($323 million) in 2001, Slovak casino operators earned a much more modest Sk330 million ($8 million), according to the Slovak Finance Ministry.

After deductions for bankruptcy protection to the Finance Ministry and other special payments, Slovakia's six principal casinos saw 2001 aggregate profits of only Sk270 million ($6.5 million). Specialists estimate that a single casino needs an income of at least Sk60 million ($1.4 million) per year to survive.

According to the report, some casino owners are involved in various scams, including striking deals with players, though stricter Finance Ministry controls have made such activities more difficult to carry out.

Today, all tables in casinos are monitored by cameras that record both player and croupier. In line with Slovak law, video records have to be stored for at least three months and made available to ministry officials at any time. In addition, some casino owners have introduced their own new measures to prevent money laundering.

And while some owners may be involved in laundering, the practice is not institutional, says Bunčák, suggesting that the current sorry state of casinos is probably more to do with unsuccessful attempts to attract foreign clients than money laundering.

"There were attempts to lure foreigners to Slovak casinos with the idea that the country might become an attractive and discrete destination for gambling. However, those attempts were not successful," said Bunčák.

"Our casinos are no worse nor better than casinos in other countries, but the entertainment industry as a whole is very underdeveloped in our country," he said.