Strain of the brain drain

THOUSANDS of educated young Slovaks are leaving the country every year to work abroad, even though there are enough good jobs for them at home.
While the country's general jobless rate has swung between 15 and 20 per cent for years, university graduates have always enjoyed extremely low unemployment levels. But despite the plethora of job opportunities, many are fleeing Slovakia for the West.
Since 1994, the Slovak education system has produced approximately 110,000 graduates. A huge proportion of these, plus many people educated before that time, have moved elsewhere. 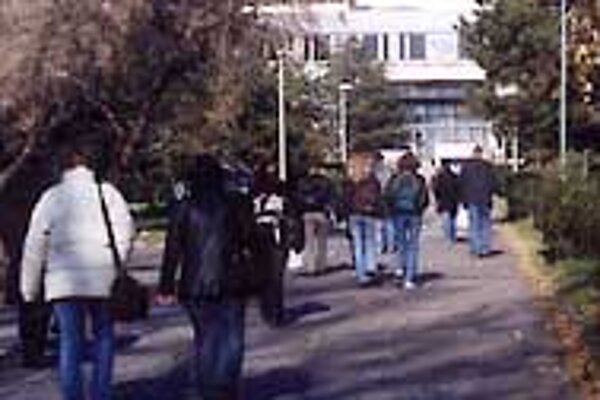 Font size:A-|A+  Comments disabled
THOUSANDS of educated young Slovaks are leaving the country every year to work abroad, even though there are enough good jobs for them at home.

While the country's general jobless rate has swung between 15 and 20 per cent for years, university graduates have always enjoyed extremely low unemployment levels. But despite the plethora of job opportunities, many are fleeing Slovakia for the West.

Since 1994, the Slovak education system has produced approximately 110,000 graduates. A huge proportion of these, plus many people educated before that time, have moved elsewhere.

Because university graduates have never faced significant unemployment problems, unlike other groups in society, a lack of jobs cannot be seen as a reason for the current brain drain.

"The university-educated population is not a risk group in [our] labour market," said Stanislav Buchta from National Labour Office (NÚP).

"I think this segment of the population has a [very good] chance of getting employment. That is apparent from our analysis of graduates' rate of success in the labour market," said Buchta (see chart).

Even though the number of unemployed university graduates always rockets at the end of each school year, it is only a matter of weeks before most of those young people get absorbed into the labour market.

The problem, insiders say, is of different kind. Getting a job is only one thing members of this ambitious, elite social group expect from their lives. Jobs in Slovakia can seem limited to those with advanced education.

"It is true that the opportunities offered in our labour market are not always satisfactory for the average graduate," said the NÚP's Buchta.

"[Satisfaction] also depends on financial reward, status in society, future opportunities and so on. In my opinion, society can't offer a very satisfactory package in this regard for the younger generation," said Buchta.

"University graduates can find jobs, but sometimes they are underpaid, with low [social] status. Every one of these young people has certain ambitions. They are looking for certain opportunities and want to achieve something [in their lives]," said Buchta.

"The professions that are extraordinarily attractive in industrially developed countries - like a doctor or scientist - get very little appreciation in our society, and I'm referring especially to financial rewards," added Peter Plavčan, head of the university-education section at the Education Ministry.

This is contrary to the situation in certain developed Western countries, which are often willing and able to offer much more to educated young people. In some of those countries, there is a lack of skilled labour, so they often try to lure experts from poorer countries like Slovakia.

"Some western European countries are beginning to selectively lower their immigration criteria [in order to enable the migration of educated workers]. Such a trend can be seen, for example, in the Czech Republic, which has started to open its labour market to young, highly qualified workers from abroad," said Buchta.

"The demand for highly qualified workers will increase [everywhere] so countries will always look for new ways of getting them," said Plavčan.

"In their new country, workers [from Slovakia] will use their [expertise] to increase the prosperity and living standards [of the host country]," he added.

Slovakia has thus been pushed into role of a breeding ground for 'brains', investing a lot in higher education, but gaining low returns for society.

Since the beginning of the communist regime until today, university education in Slovakia has been free. In addition, the government has been cofinancing the accommodation, meals and transportation of students. The current government has expressed its intention to introduce fees for university education, but while that may ease financial pressure in the future, past investments will never be recovered.

"According to a 1998 analysis of the costs required for the preparation of a qualified workforce, the average cost of training one university graduate is approximately Sk1.9 million ($45,000)," said Plavčan, explaining that this amount includes not only education-related costs, but also the social benefits tied to the status of student.

"And these costs are constantly growing. They have grown 2.5 times since 1985," said Plavčan.

"According to this analysis, the training of one student is paid for by - apart from his two parents - 149 other economically active citizens who don't have anyone from their families at university," said Plavčan.

However, "the Slovak legal system cannot prevent its citizens from spending a productive period of their lives outside Slovakia, and it is also not possible to ask for financial compensation for the costs of their study," he said.

"In the case of a university graduate leaving to live abroad, the direct loss [to society] is Sk1.9 million per student. However, the indirect loss is significantly higher," said Plavčan.

And experts say the unfavorable trend is probably here to stay.

"In my opinion, the emigration of young educated people will continue," said Plavčan.

With Slovakia missing out on thousands of skilled workers, society needs to find a way to keep educated people at home. How to do that, however, is not clear.

One possibility, suggested the incoming president of Slovakia's Commenius University, František Gahér, is to try harder to keep the best students at universities after they graduate, working in part-time or full-time teaching roles.

"The goal is to create a similar situation to how it used to be - to keep the best graduates at universities," Gahér said.

However, university professionals say turning such a dream into reality would be difficult, since it would require universities to make the jobs they offer graduates more appealing than the jobs the graduates can get abroad.

"The so-called 'mortality' [quitting rate] of postgraduates is immense here. The majority of Slovak IT professors have already left for jobs abroad or have spent a long time abroad. Being a university lecturer in Slovakia is a noble way of committing suicide," said Andrej Ferko from Commenius University's Faculty of Mathematics, Physics and IT.

"The 'genocide' of Slovak academic intelligentsia is partly due to laughable wage levels," he added.

The best-paid university employees - professors - are paid a basic wage of only Sk18,000 ($500) per month, while postgraduates who work as part-time lecturers are supposed to live on Sk6,000 ($143) per month, Ferko said.

However, the long-term outlook does not appear to be hopeless, said the NÚP's Buchta.

"This process is irreversible, especially when you consider [our imminent] integration into European structures, but I think that such mechanisms should be created that would enable this talented and elite group to return back home," said Buchta.

"I think there is a chance that at least some of this social group could, sooner or later, come back to Slovakia as qualified managers or as qualified experts of some kind," said Buchta.

"All this will depend on Slovakia's integration into the European Union. I can see the big picture: The free movement of workers will [eventually] reach the point when we will not only get back our top managers, but we'll get new foreign ones too," said Buchta.