Slovak schools on point of collapse

TEACHERS all over Slovakia have no choice but to teach their students in buildings with leaking roofs, cracked walls and broken heating systems. Threats from local utility firms demanding bill payments are an everyday occurrence, and sometimes students carry out their own repairs.
Education professionals say this desperate state is testament to chronic underfunding in the sector.
A prime example of the decrepit condition of many Slovak schools is the boarding school on Jedlíkova Street in the eastern city of Košice. 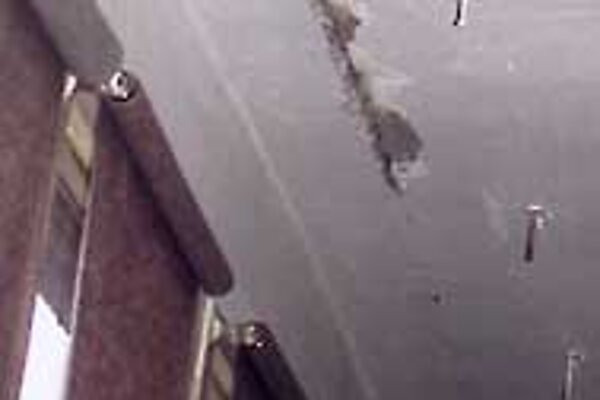 Font size:A-|A+0
TEACHERS all over Slovakia have no choice but to teach their students in buildings with leaking roofs, cracked walls and broken heating systems. Threats from local utility firms demanding bill payments are an everyday occurrence, and sometimes students carry out their own repairs.

Education professionals say this desperate state is testament to chronic underfunding in the sector.

A prime example of the decrepit condition of many Slovak schools is the boarding school on Jedlíkova Street in the eastern city of Košice.

"Water has run dangerously close to the power lines since the students' sleeping quarters were built 22 years ago," says Juliana Kožárová, head of the school's dormitories that house 360 students.

"Students often paint their rooms themselves because the school doesn't have money for professional painters. They are not grown up yet but they don't complain. Students are glad that they have a place to live," says Kožárová.

A hygiene inspector recently pointed out that the bathrooms were in an appalling condition.

"We found out that concrete had just been dumped under the bath and had many holes in it," says Kožárová.

In July this year, former Education Minister Peter Ponický told the SITA newswire that out of an estimated 3,500 elementary and secondary schools, 3,000 are thought to be in poor physical condition. He added that the education sector is approximately Sk300 million ($714,000) to Sk400 million ($952,000) in debt.

Chynoracký was reluctant to estimate how many Slovak schools were in a poor condition, stating: "It is hard to define 'poor condition'. We could say that all schools are in a bad shape."

However, Jozef Kosár, the director of the capital expenses department in the Education Ministry said he thought about 50 per cent of all Slovak schools needed urgent reconstruction.

In some sense, the sorry state of Slovakia's schools is no longer the Education Ministry's problem, because responsibility for education funding recently devolved to the regions.

Until 1996, all types of school - elementary, secondary, colleges and universities - were financed by the Education Ministry. Then the administration of schools was decentralised, and from 1996 to mid-2002 elementary and secondary schools were financed by regional councils, while universities have remained the responsibility of the Education Ministry.

In July, some of the responsibility for the funding of schools was transferred from regional governments to the more local municipal governments. Cities and municipalities are given funding directly by the Finance Ministry, which they spend in a number of areas, including education.

Politicians said decentralisation was introduced to get more money into the right hands, but some school leaders say they haven't seen any changes.

"Our school hasn't seen any more money coming yet. I don't see any positive changes," says Lýdia Želinská, who is the principal's assistant of an elementary school on Bieloruská Street in Bratislava.

Regional politicians blame the Finance Ministry, which, they say, simply doesn't allocate enough funds. Pavel Blažej from the Education Department of Bratislava's regional government says the Bratislava region needs Sk750 million ($18 million) for the repair of numerous school roofs, but that money is not forthcoming.

"Every year we assign a certain amount of money for schools in poor condition, but what the state budget gives us is not enough. Another problem is that some schools don't [realise they are entitled to ask for money for repairs]," explains Blažej.

School leaders in the east of the country say they have more to complain about than their counterparts in the capital, touching on traditional tensions between the richer west and poorer east.

"All the money (from the Finance Ministry) goes to Bratislava and to the rest of the western part of the country, and the poor east gets all the crumbs," says František Slebodník, mayor of the eastern town of Spišské Podhradie, adding that state seems to finance everything but schools. "One can only cry," he says.

If the money is just not there, educators say other solutions to the problems need to be found so that Slovak children can continue going to school. One suggestion is to fund repairs with money that is being currently used elsewhere in the sector, for example, by cutting staff. Merging some schools under one principal is one measure proposed as part of the rationalization process currently underway. In the future, it is likely that three schools will share one principal.

Another suggestion is to collect donations for repairs from whoever is willing to pay. Donors are usually parents or graduates of the schools in question.

At the elementary school on Bieloruská Street in Bratislava, parents and others who rent the gyms after 18:00 provide a little bit of extra cash, according to principal's assistant Želinská.

In addition, the school uses the cheapest labour possible in order to save some money.

"We used to have convicts painting for us because it was cheaper for the school board," she laughs.

Despite the efforts to save and raise money, the problems persist, adding obstacle after obstacle to the teaching process. One problem at the school on Bieloruská Street is large holes in the walls, with the gaps "so huge that teachers in different classrooms hear each other speaking," says Želinská.

But as with many schools, this Bratislava school's main problem is the atrocious condition of its roof.

"We have to put buckets on the floor to catch the water every time it rains," Želinská says. "In Slovakia, every school that is 30 years old, like ours, has this problem."