New Year's celebrations across the country

LIVE music, mulled wine, fireworks and a cheerful sociable mood are some of the things on offer during the many New Year's celebrations held in almost every Slovak town and city. Below is a list of what is happening this New Year's Eve in some of the major Slovak towns and cities. 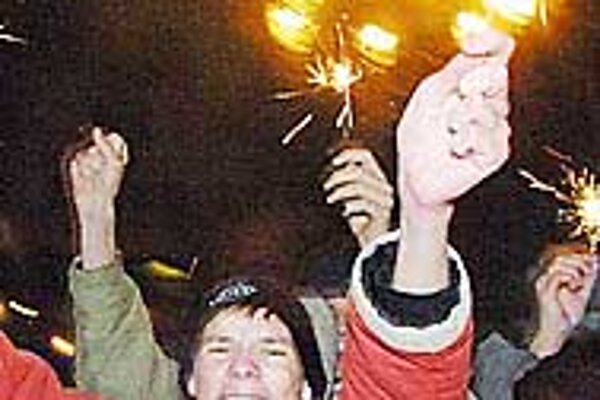 Font size:A-|A+  Comments disabled
LIVE music, mulled wine, fireworks and a cheerful sociable mood are some of the things on offer during the many New Year's celebrations held in almost every Slovak town and city. Below is a list of what is happening this New Year's Eve in some of the major Slovak towns and cities.

The capital will celebrate the event at three different places. A concert will take place in the city's Main Square featuring Slovak band Lojzo at 18:00. Seven other bands and singers will follow, including jazzman Peter Lipa, ska band Polemic, country-pop band Vidiek and rock band Tublatanka. The programme will finish at 2:00.

A big disco and laser show will start on Michalská Street at 19:00. Children and those who seek a haven from the city centre's overcrowded streets can come and enjoy themselves in Hviezdoslavovo Square, where a more relaxed atmosphere will prevail at the skating rink from 14:00 and a karaoke show will start at 21:00.

The focus of the celebrations will move to Castle Hill at midnight, where a 10-minute fireworks display will entertain the city.

The second-largest Slovak city will hold a New Year's celebration with live dance and music shows. Popular Slovak bands will play on Hlavná ulica (Main Street) from 22:00 to 1:00. At midnight a fireworks show will light up the sky.

Mierové námestie (Peace Square), right in the centre of this western city, will be lined with stands offering traditional Slovak food and drinks, including mulled wine and sweet punch. The dance and music programme will start at 15:00 with hip-hop and modern dance troupes performing. Rock, pop and country bands will perform from 20:00 to 3:00. At midnight the revellers will sing the Slovak national anthem and Trenčín's mayor will give a speech, to be followed by a fireworks display.

Silvestrovská veselica, a New Year's Eve party with traditional as well as modern dance shows, will start at 22:00 on SNP Square and the Sásová housing estate. Refreshment stands erected on the main square of this central Slovak town will offer cold beer as well as hot punch and wine. There will be fireworks at midnight and the mayor will give a speech.

This southern city will present a live rock concert on Svätoplukovo námestie (Svätoplukovo Square). The event will culminate in anthem singing and a fireworks display.

The eastern city of Prešov will put on a disco for the city's youth in front of the Jonáš Záborský's theatre and a music programme, including folk and country bands, in the pedestrian zone. The celebration will last from 22:00 to 1:00. At midnight, expect to see fireworks and to hear the mayor's New Year's wishes.

This northwestern city will shoot off fireworks in the centre and in three other places at midnight.

The popular mountain-lake resort in the High Tatras will also have an open-air New Year's celebration. Traditional local bands will present New Year's Eve and New Year's Day customs practised in the Tatra's region. Children can participate in a skiing race. DJ Gabi will open the celebration, which will last from 11:30 to 14:30 under the ski jumps at the FIS Štrbské Pleso sports centre.