ALEXANDRA Ihringová is the first and only Slovak woman to referee soccer matches in the men's second league, and one of only two women from Slovakia to referee women's matches at an international level.
Around 20 women referee men's soccer games in Slovakia, but none of the others do it at such a high level. One Slovak woman referees games in the men's third league, while the rest work in either the fourth or lower leagues.
Ihringová says that when she blew the whistle in her first match in the men's second league, she felt a great sense of accomplishment. 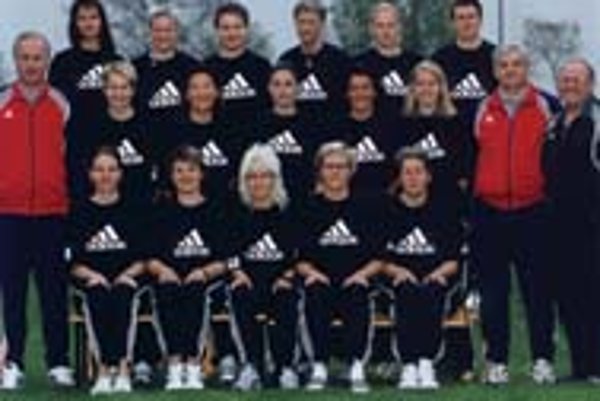 Font size:A-|A+
ALEXANDRA Ihringová is the first and only Slovak woman to referee soccer matches in the men's second league, and one of only two women from Slovakia to referee women's matches at an international level.

Around 20 women referee men's soccer games in Slovakia, but none of the others do it at such a high level. One Slovak woman referees games in the men's third league, while the rest work in either the fourth or lower leagues.

Ihringová says that when she blew the whistle in her first match in the men's second league, she felt a great sense of accomplishment.

"The first feeling was like euphoria," she remembers. "But later I realised that it is not only about tanning in the sun. The hard work has just begun, and I need to show everybody that I can do it."

Some might say that this 27-year-old woman was born kicking a soccer ball, as she has excelled as a player as well as a referee. She was a soccer star at school, and her high-school team (Filozof Bratislava) won the Slovak schools championship three times.

The name 'Ihring' is well known in Slovak soccer circles, as her father, Anton Ihring, is the head of the Association of Sport Units and her uncle, Karol Ihring, was named best soccer referee in Slovakia three times. He is currently a sports director at Dukla Banská Bystrica soccer club.

"My uncle is an example to me and he motivates me to improve. I resisted refereeing for many years until I finally got persuaded and said yes. And I don't regret it at all," Ihringová says.

Ihringová attended the Faculty of Physical Training and Sport and her career as a referee started in 1996, when Slovakia's first seminar for women referees took place. There she met some of her current colleagues and started to blow the whistle at women's matches organised by the Slovak Soccer Union (SFZ). Also at this time she refereed some regional juniors matches and after two years Ihringová began to referee for the men's fourth league.

In 2002, the referee oversaw her first regional match in the third league, and her career took another huge step forward in July last year when she achieved what no other woman before has achieved: She refereed a republic match in the men's second league. So far, Ihringová has two matches in the second league behind her - one in Rimavská Sobota and the other in Nitra.

"It was a big struggle to get to this point, because there are some limits to how many referee candidates can move forward and the soccer union had to choose between me and the other referees, who were all men. It helped me a lot that I had had a very good season internationally, since I refereed the finals of the Under-19 European Championships in May 2002," explains Ihringová.

Although Ihringová is registered on the SFZ nomination sheet as an assistant not a referee, she is authorised to referee as well. The reason is that she is a member of an association called Šanca (Chance) and referees belonging to this group are entitled to referee. Ihringová beat out 10 male candidates also vying to referee in the second league.

Ihringová is one of only two female referees for Slovakia employed by football's world governing body, FIFA, for whom she started working in 2001. Opportunities for Slovak women to referee have grown over the last few years, thanks in part to success stories like Ihringová's.

"I feel that Ihringová is a very good example for other colleagues because in the past everyone thought that women would never get the chance to referee any matches. And now women get the opportunity to go abroad and referee international games," explains Ján Fašung, the secretary of the SFZ referee commission, adding that the number of female referees in Slovakia is increasing.

"This is not common in surrounding countries. Female referees were not to be found in Slovakia just six years ago. We started to organise seminars and prepare women so they could progress to UEFA [Union of European Football Associations] and FIFA matches," he says.

In Fašung's opinion, being female can be an advantage for a referee. He says male players behave deferentially in controversial situations because they often respect women more than they respect other men.

Ihringová lived in Bratislava until last year, when the US-based company she works for transferred her to Prague, where she is planning to stay until March this year. As the Slovak Soccer Union has an agreement with the soccer union in Czech Republic, she has refereed three first-league women's matches in Prague.

"Soccer in [the Czech Republic] is more established and of a higher level than in Slovakia, but in women refereeing Slovakia is ahead. This country offers training that can be envied by many developed countries. Usually around 20 to 30 female referees are trained at each of the union's soccer seminars. In the Czech Republic, only about 10 women are trained to be referees at similar seminars," says Ihringová.

One of the boys

Although the next soccer season doesn't start until March, Ihringová will have to carry out a number of physical tests in February. All professional referees have to take these tests four times a year.

"I'm not having a total break at the moment. Instead, I'm preparing for next season," she says.

Ihringová does not get any special treatment just because she is a woman. She has to run just as far as her male colleagues do, aiming for 2,800 meters in 12 minutes.

"The union commission didn't make it easy for me and told me to run the distances that men do. They said, 'If you want to referee in the second league, you also have to be able to run as far as any other referee'," she says.

According to Ihringová, regardless of their gender, it is very important for referees to be in good physical shape and to be skilled in leading matches. They need to be able to communicate with the players, make quick decisions and follow all the rules.

In addition to possessing all these attributes, Ihringová says she has "a flair for the game", works very hard and watches her colleagues to see what she can learn.

The most uncomfortable experience she has had so far is when a player, unsatisfied with her assistant's decision, tried to kick him. However, she soon realised it was just part of the job.

"I had to get used to these things quickly, because swearing and vulgarity are very usual. On the other hand, it feels good when a team, even though it lost, comes up to me and praises my work," says Ihringová.