EU vote set for May

THE PARLIAMENTARY EU referendum committee set a definite date for Slovaks to go to the polls and cast their ballots for or against EU entry, while analysts voiced their concerns about an apparent absence of public debate.
The nationwide referendum, asking the question, "Do you agree with the Slovak Republic becoming a member of the European Union?" will be held on May 16 and 17 this year, a full month earlier than many had expected.
Parliament is scheduled to pass a final resolution on the calling of a referendum at an extraordinary session on January 21. The resolution will serve as a basis for President Rudolf Schuster to call a referendum, although it seems that act will be a mere formality. 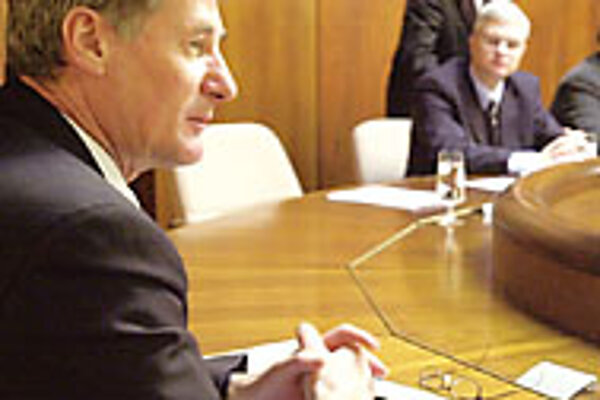 Font size:A-|A+
THE PARLIAMENTARY EU referendum committee set a definite date for Slovaks to go to the polls and cast their ballots for or against EU entry, while analysts voiced their concerns about an apparent absence of public debate.

The nationwide referendum, asking the question, "Do you agree with the Slovak Republic becoming a member of the European Union?" will be held on May 16 and 17 this year, a full month earlier than many had expected.

Parliament is scheduled to pass a final resolution on the calling of a referendum at an extraordinary session on January 21. The resolution will serve as a basis for President Rudolf Schuster to call a referendum, although it seems that act will be a mere formality.

"The coalition and opposition agreed on everything today," said Speaker of Parliament Pavol Hrušovský following a January 8 meeting of the parliamentary EU referendum committee, in which all parties discussed the details of the referendum.

No political party has expressed opposition to EU entry, and analysts predict support for accession will continue across the political spectrum.

"If there are any euro-sceptics at all, I expect them to be a very marginal group," said Ľuboš Kubín, political scientist from the Slovak Academy of Sciences.

EU membership enjoys widespread popular support in Slovakia. A survey performed by the Public Opinion Research Institute of the Statistical Office at the beginning of December 2002 showed that 68 per cent of those prepared to participate in a referendum would vote in favour of the country's EU entry. Only 12.2 per cent were undecided.

Analysts say there are various reasons for the high level of support for EU accession, discontentment with the Slovak government being one.

"People in Eastern Europe - with the exception of the Russians - are more supportive of the European Union than they are of their own governments, which helps explain why these countries are all trying to join the European single market. This is particularly the case in the Slovak Republic, where three times as many people give the EU a very high rating than say the same about their own government," states a study of global attitudes compiled by the US-based Pew Research Centre For The People & The Press.

"I think this report misinterprets and wrongly connects two separate phenomena. I think [the high support for EU entry] is to do with fulfilling a desire, which during the period after [the end of the communist regime in] 1989 was expressed by the slogan 'Back to Europe'," said Oľga Gyárfášová, senior research fellow at the Institute for Public Affairs think tank.

The authoritarian rule of Vladimír Mečiar and his Movement for a Democratic Slovakia (HZDS) in the years 1994 to 1998 brought the process of integration into both the EU and NATO to a halt and left the country far behind its neighbours, Gyárfášová said.

"While during the second half of the 1990s other candidate countries discussed in great depth the consequences of EU membership, or were forming their positions regarding key institutional reforms and the future of the EU, we were trying to solve [the issue of] getting out of international isolation and later, after 1998, trying to figure out how to catch up [with other candidate countries]," said Gyárfášová.

Because the country had so much ground to cover in such a short space of time, politicians have not had the opportunity to develop a long-term vision based on informed debate, observers said.

"Slovakia has several parallel goals related to foreign policy, such as entry into NATO and the EU and [because those goals require many small steps] there is a tendency to look just weeks, or perhaps months, ahead," explained Vladimír Bilčík, an analyst with the Slovak Foreign Policy Association.

And while the politicians may not be fully addressing the implications of EU accession, some say the public has not been sufficiently informed of what EU membership means.

"There is never enough information [about the EU and the impact of membership]. In October 2002 45 per cent of people felt that they were sufficiently informed and 40 per cent felt a lack of information," said Gyárfášová.

But because of the nature of the institution, even the best-informed people cannot predict the future shape of the EU, as far as its structure, decision-making or policies are concerned. Slovaks are thus supporting entry into a great unknown.

A draft constitutional treaty is to be prepared by the European Convention on the Future of Europe, whose purpose is to propose a new framework for the EU by June of this year.

"The contents of the reform are not clear at the moment. However, the proposed draft constitutional treaty is likely to affect all fields: It will influence EU institutions, EU financing, and EU common policies," said Bilčík.

The conclusions of the Convention will be presented as recommendations to the European Council, scheduled to meet in June. The European Council is expected to call an intergovernmental conference, which will decide on the form of the final agreement.

"The crucial question is how long the intergovernmental conference will take. If it ends before the expansion takes place [in May 2004], Slovakia will not have the right to vote about the new agreement," said Bilčík.

Analysts say that Slovak businesses are also poorly informed about how EU membership will affect their activities.

"There are certain expectations in Slovak business and economic circles that are not based in reality. This is a significant threat to eventual parity of living standards because if they are not ready, companies will not be able to compete effectively. Enterprises will have the greatest impact on how quickly the gap between Slovakia's and the EU's competitiveness is reduced," states a recent report by the Institute of Slovak and World Economy of the Slovak Academy of Sciences.

The report concludes that the overall readiness of the commercial sector to enter the joint EU market is insufficient and almost half of Slovak businesses have not yet started preparing for entry. Nevertheless, between 30 and 40 per cent of companies questioned expect their situation to improve after Slovakia's accession.

Experts say that EU membership will continue to be supported in Slovakia even if accession brings serious problems.

"None of the member states has expressed a desire to step out of the union, regardless of whether or not their expectations are fully met after entry. Similarly, people in Slovakia will not start rebelling against membership even if problems arise," said Gyárfášová.