A TRAGEDY tainted the end of year celebrations in the eastern Slovak village of Tušice, when a 28-year-old man shot dead his two children and then killed himself. Relatives and neighbours said the man was a violent person who brutally beat his wife, causing her psychological distress. The woman had filed charges for abuse in the past, and on the day of the murder, she left the children at her parent's house to go to the police to report him again. While she was there, the husband came to try to pursuade her to move back to their common home. Finding her absent, he killed their daughter aged five, their one-year-old son, and then himself. 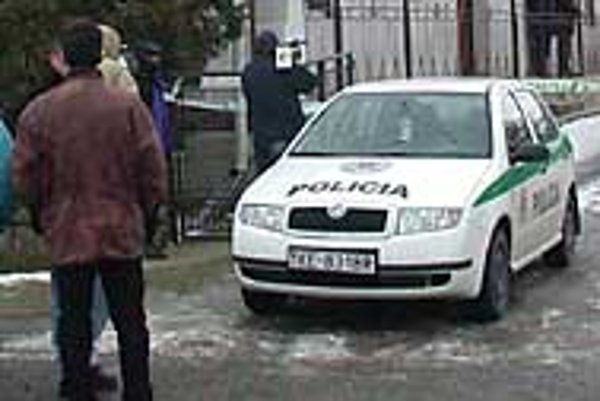 Font size:A-|A+0
A TRAGEDY tainted the end of year celebrations in the eastern Slovak village of Tušice, when a 28-year-old man shot dead his two children and then killed himself. Relatives and neighbours said the man was a violent person who brutally beat his wife, causing her psychological distress. The woman had filed charges for abuse in the past, and on the day of the murder, she left the children at her parent's house to go to the police to report him again. While she was there, the husband came to try to pursuade her to move back to their common home. Finding her absent, he killed their daughter aged five, their one-year-old son, and then himself.

One of the people who tried to help the family is Mária Hargašová, head of the Centre for Advisory and Psychological Services in Michalovce, an institution for battered women. She is convinced that the tragedy could have been prevented but due to a lack of coordination and cooperation between the different institutions involved, i.e. the police and the prosecutors, this did not happen.

Even though the case received extensive media coverage, and a petition was started by the inhabitants of the village demanding more effective legislation, Hargašová claims that the Tušice case will have a negative effect on the plight of abused women in Slovakia. Instead of serving as a warning to abusers, the tragedy will make women too afraid to report violence against them because they saw that the mother of the dead children looked for help and was not granted any.

"What we need right now is a media campaign that will reassure the public that this is the last case of its kind and that there will be protection for the victims of domestic violence," adds Hargašová.

Hargašová, who is also the chairwoman of the civic association Pomoc rodine (Help for the Family), emphasises the importance of a public campaign to break the taboo and make domestic violence an issue for public debate. Although the level of this type of abuse in Slovakia is hard to determine because of the lack of official statistics, activists consider it a major social problem affecting women and children of all walks of life.

"We are trying to show the abused women that they shouldn't hide. They often think that [abuse] is their own, personal problem and are ashamed to talk about it. They are convinced that there is nobody to help them and don't realise that their situation can be solved only with help from outside," Hargašová says.

Coinciding with the public outrage about the murder and the passivity of the police is a campaign organised by the non-governmental organisation Možnosť voľby (Pro Choice) and six other NGOs dealing with human rights and women's issues. The initiative, entitled Piata žena (The Fifth Woman), is in its second year, and its subject is domestic violence against women.

The title is based on research carried out in Austria, which found that every fifth woman who lives in a relationship is a victim of physical violence at home. In Germany it is estimated that every fourth woman is abused, or maybe more.

"If we consider that [the abuse] can be physical, sexual or psychological - even keeping a woman in economic dependency - the number could be even higher," says Oľga Pietruchová, chairperson of Pro Choice and one of the organisers of The Fifth Woman campaign.

Because there are no statistics about domestic violence in Slovakia, police and aid organisations can only estimate the number of cases. Activists from the non-profit sector agree that it would be useful if the police were obliged to record the number of abuse cases that occur between partners or ex-partners.

"I think it's possible that in Slovakia it is not every fifth but maybe every fourth woman [who is abused] because the problem of domestic violence is strongly connected to alcoholism. Even though alcohol is usually not the primary cause, it creates tension and aggression, and contributes to a higher frequency of cases," says Hargašová.

The Fifth Woman was the first nationwide campaign against violence towards women in Slovakia, arising as a natural joint venture between various women's organisations.

"We thought it was about time to start talking about this issue because abroad it is a focus for public attention - and the attention of the judicial system and the police [which is not the case in Slovakia]", says Pietruchová.

Last year's campaign was an introduction to the issue of domestic violence, raising public awareness about its existence. This year organisers would like to take things a step further, running an advertisement on primetime TV. The spot shows people ignoring the sound of a fight, indicating domestic violence in a neighbouring flat.

"This year we would like to get across the message that this problem can only be solved if it is considered to be of concern to all of us. But mainly the police, the prosecutors, the courts, the social institutions - everybody whose responsibility it is to deal with the issue," says Pietruchová.

The work of the NGOs seems to be making a difference, because in June 2002 concrete measures were put in place by lawmakers to protect abused women.

"Several laws were passed to help the victims of domestic violence and I have to say, this is a big step forward because in other countries it took years and years to pass legislation like this," says Pietruchová.

One of the changes is that now a perpetrator can be prosecuted without the permission of the abused person. Often a woman who has reported her husband to the police and filed criminal charges against him, then has to go back home to the man who abused her. Later, she is often forced by her husband to withdraw her charges, the case is closed, and nothing can be done about it.

Under the new law, charges are filed not by the victim but by the prosecutor, and they will be dealt with even if the woman later withdraws them.

Another regulation allows the victim to apply for a preliminary injunction, which would force the violent person to leave the shared apartment. The court is required to make a decision within seven days.

"This is advantageous for the woman because she doesn't have to look for shelter; it is the husband who has to leave," says Pietruchová.

An additional change is that domestic abuse no longer refers only to direct relatives but includes ex-spouses. Previously, if a couple was divorced but had to keep living together because they had no other choice, the husband could continue abusing his wife within existing law. It was not considered a criminal act because she was not a relative. According to the new law, a wife and an ex-wife have the same status.

The new legislation also stipulates that the interrogation of children should be recorded on video, so they are not stressed by being questioned in court. However, activists are sceptical about this new regulation.

"We shall see how that works in practice, whether the police stations actually have the equipment to do that," says Pietruchová.

Although all these modifications are significant, there are still areas in which legislation could be improved to protect abused women and their families, insiders say.

"Policemen here in eastern Slovakia tell us that what is lacking is a detention centre, where they could temporarily place a drunk, violent person," says Hargašová.

And that is not the only building that would help ease the situation. The Fifth Woman campaign is currently putting pressure on the relevant institutions to provide shelters for abused women, which should be separate from asylum homes for homeless people. Moreover, they should offer legal and psychological help, and be in a secret location so that women are protected from their perpetrators.

Some of the NGOs involved in the Fifth Woman campaign are already trying to run shelters for battered women, but they often face financial difficulties doing so.

Activists place a lot of responsibility for the current situation in the hands of the police, who sometimes witness abuse but choose not to take any action.

"We would like to see an amendment to the police force law that would allow a policeman who has witnessed a scene of domestic violence to remove a husband from the shared apartment immediately. That would be the most effective help to the victim," explains Pietruchová.

"The case [in Tušice] in eastern Slovakia could have been prevented because [the police] knew that the man was dangerous - the woman had already reported him to the police. By not acting, society as a whole must take the blame for what happened."