Woodsmen in the face of change

JOZEF KERN grew up in the woods. His family lived 12 kilometres from the closest town, in a forester's house with no electricity.
"I wanted to be a forester from the time I was born," says 52-year-old Kern. "My grandfather served in Count Pálffy's forests, and my father, who initially studied to become a butcher later switched to forestry too."
Like most foresters, the grey-bearded Kern has forestry in his genes. He started working in the woods 30 years ago and has been wearing the forester's uniform - mountain shoes, green shirt, and knickerbockers with woollen knee-high socks and a felt hat - ever since. 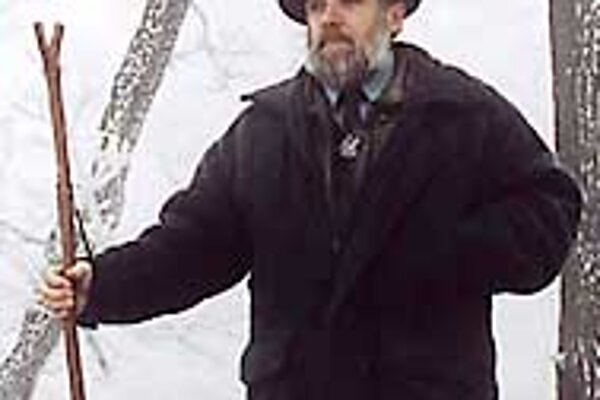 Font size:A-|A+
JOZEF KERN grew up in the woods. His family lived 12 kilometres from the closest town, in a forester's house with no electricity.

"I wanted to be a forester from the time I was born," says 52-year-old Kern. "My grandfather served in Count Pálffy's forests, and my father, who initially studied to become a butcher later switched to forestry too."

Like most foresters, the grey-bearded Kern has forestry in his genes. He started working in the woods 30 years ago and has been wearing the forester's uniform - mountain shoes, green shirt, and knickerbockers with woollen knee-high socks and a felt hat - ever since.

For 15 years he has been the regional head of the national Forest Service in Pezinok. Kern is the boss of six other foresters, and together they supervise 5,145 hectares of the surrounding woods. On a typical day he meets with his subordinates in the morning and assigns them tasks to do. He then returns to his office to do paperwork, and later he goes out into the forest to check on the progress of the other foresters' work.

But, he says, over the last few years the amount of paperwork he has to do has been steadily increasing. The reason for this is the restitution of the nation's forests, which were nationalised by the communists.

"This process brings constant changes to the administration. At least we have no time to get bored," he says with a laugh.

Nuts and bolts of forest management

According to the state forestry company, Lesy, today there are 2,330 foresters in Slovakia. Together they oversee an area of almost two million hectares of state as well as non-state forests. Lesy employs 1,301 foresters, who manage slightly more than half of that area. The military and schools own the forests that cover 90,000 hectares, and 800,000 hectares belong to private individuals.

Slovakia's forests cover a larger proportion of land than forests in the surrounding countries, but in those other countries much less is owned by the state. In Slovakia, the type of terrain varies from one forest to another, and the number of workers varies accordingly.

"The owner of a forest assigns the appropriate number of foresters that a particular area needs," says Igor Michalík, from the forestry section of the Agriculture Ministry.

A forester is assigned a certain area, which he or she has to supervise. In state forests this area is around 1,000 hectares. The forester is responsible for the health of the forest, for its protection, and for sustainable development. His duty is to organise work on that area - seeding, growing, and cutting down trees, protecting species, cleaning the environment, and feeding animals in times of need.

Explanation lies in the past

The roots of today's increased bureaucracy in the forestry sector reach deep into Slovakia's history. In 1989, when communism was overthrown, the woods were managed by five state companies, which in 1999 merged into a single company, Lesy.

Well before the communists came to power in 1948, there was more of a feudalistic system in place. Gradually, the forests were divided by the ruling class and given to the people in return for services. The ownership of the forest was passed from generation to generation. For example, if a family had 10 children, that family's area of the forest would be divided evenly among all their children.

Now that a restitution policy is in place, the descendants of the people who owned and took care of the forests before communism want the land that belonged to their ancestors back. However they often lack the necessary documentation proving their original ownership.

"Before the second world war, [the woods] had become incredibly fragmented. And now we have big problems with [returning the property to the pre-war owners]," says Michalík.

One result of the restitution process is that more private contractors with their own equipment are doing the work formerly carried out by state employees. That has increased the amount of time people like Kern have to spend in the office rather than in woods.

"I should be focussing more on the cultivation of the forest. But instead, I do accounting of the extracted wood," says Kern. "Everything is under constant reorganisation and this hurts the forest a lot."

He explains: "The forest is not like a crop of corn, which you plant and harvest in the same year. A forest grows for 120 years and that is why planning must be long-term. The same applies to transferring the forests from one owner to another [due to the restitution process]. If a forester doesn't supervise a certain area for at least 10 years, no traces of his work can be seen there."

According to Michalík, it is a pity that the forests were nationalised, because "the owners at that time knew the best way of taking care of the forests."

Until the 1960s, foresters lived in houses in the forest. They knew everything that went on in their neck of the woods and as a result they were able to effectively coordinate the work of lumberjacks and provide the necessary information to their bosses.

But then they were moved, along with their families, into housing units, usually on the outskirts of towns. They were moved because it was easier and cheaper to transport their children to schools and wives to work than if they lived in the forest. The foresters and other forest workers were driven to work in company cars and the state provided them with food and warm clothes.

"I remember the lumberjacks refusing to wear helmets and certain clothes, arguing they didn't need them or that they would look stupid," says Kern. "Now, when there is no money and they have to buy everything themselves, they will wear anything. During communism we had more money than we do now.

"We also had a number of social activities we had to attend...We constantly grumbled about the conferences or balls we had to go to. That time we all knew each other's families. Now everybody lives on his own."

Back to democratic principles

"Before the war, foresters were on the same [high] social level as priests and teachers, but respect for this occupation has since disappeared," says Michalík.

Foresters agree, believing that the problem is connected with people's attitude towards forests in general. Never before have foresters seen so much theft.

"During communism, I didn't experience any poaching," says Kern. "People would never commit such a crime, because they knew they would go straight to jail if caught. But today, poachers blatantly disregard the rules.

"Just imagine - they even kill animals during mating season, fleece them and butcher the meat on the spot. They leave such obvious traces behind. It makes my blood curdle! And the police almost always let them go unpunished. Before the war people poached because of poverty, but now it's the rich men who do it for business."

Not everything has changed

One thing that has stayed the same through all the changes in administration is the dangers posed by the unpredictable weather and the cutting down of trees. Calamities associated with wind and ice continue to destroy the cultivated forests, and a lack of money is gradually making the lumberjacks' work more dangerous than that of miners, according to Kern.

Perhaps the most significant constant in the woodsmen's changing world is their own attitude to the forest. Kern may no longer lives in the forester's house where he grew up, which is now used by gamekeepers from time to time, but he says he could not imagine doing any other kind of work.

"Every day, the forest surprises me with something new. I would never change this work for anything else."